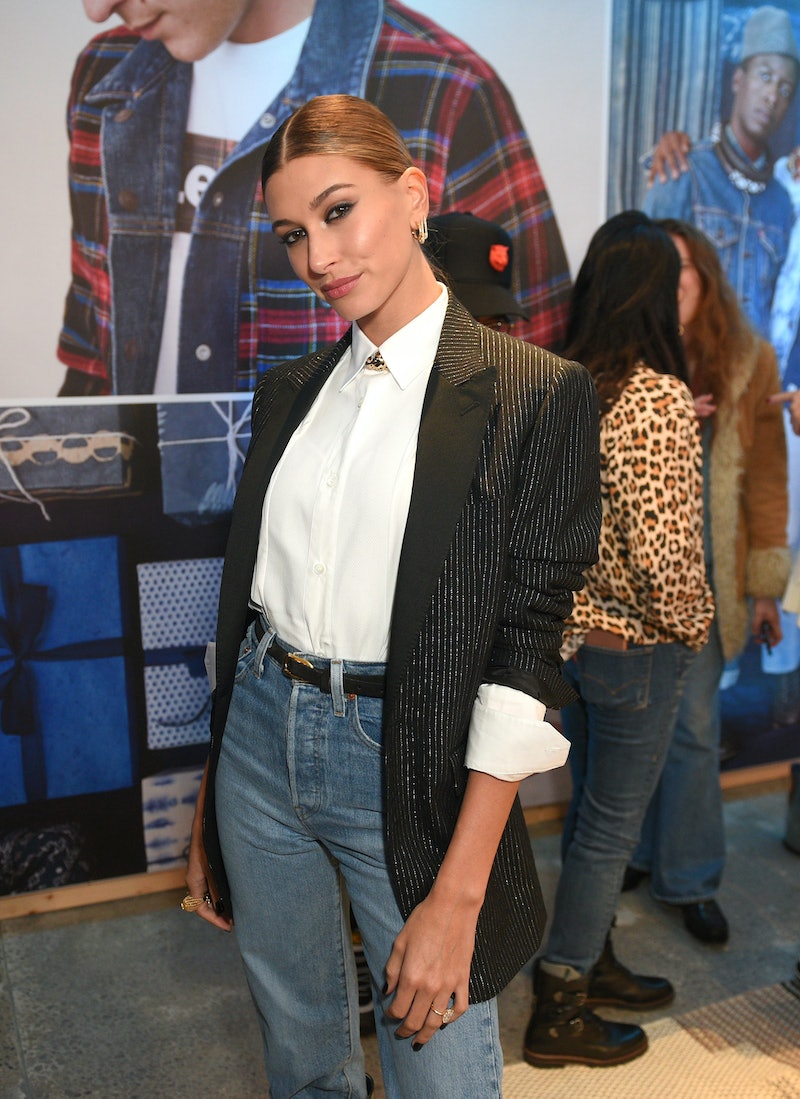 Hailey Baldwin likes to have fun with her hair and has the luxury of being able to switch things up one the regular. Hailey Baldwin has pink hair — again. It's a coif color she has returned with incredible frequency throughout the past year. It's also one of the hottest hair hues and trends in recent memory.

It's likely that Baldwin rocks this shade so often simply because it looks so freaking good on her. Hey, if it works, it works. She's a model. She's 22. She's married to Justin Bieber. She's the daughter of one of the infamous Baldwin brothers. She has the good fortune to be able to do as she pleases and that includes swapping out her signature blonde strands for pink ones.

Baldwin was spotted over the weekend with her newly-tinted blunt bob. The shade had a bit of a twist, too. It appears to be different tones of cotton candy pink. The fact that the color has so much depth, dimension, and isn't uniform is what makes it so eye-catching.

Baldwin wore her short, pink locks with a serious center part. They were swept back into a tiny pony while out and about and on a coffee run. She also rocked an oversized, gray coat that hit at the ankles and cream-colored high-top sneakers for the ultimate winter glamsual ensemble.

It looked like Baldwin's real hair, too. It might be a temporary, wash in and wash out color that will last over the course of a few shampoos. Or it could be something semi-permanent that was the work of her colorist. The shade was also highlighted by Baldwin's gold hoop earrings.

If you recall, Baldwin slayed similar soft pink strands at the 2018 Met Gala. She added a crown of flowers and her locks matched her lips and lids, which were also pale pink.

Baldwin switches from pink to platinum blonde pretty frequently. She likely has a glam army to help keep her strands in tip-top shape and conditioned from all of the coloring and processing.

The model also had gradient pink hair on the cover of The Sunday Times Style magazine back in May. She paired it with matching matte lipstick.

It doesn't matter if Baldwin is rocking a super long pony...

....or blue-dipped strands. She looks amazing and keeps her fans and fashion followers guessing. Baldwn has been favoring a bob — both a blunt, chin-length version and a longer shoulder-skimming style — for a while now.

It's a pretty safe bet that her hubby Justin Bieber loves her pink locks and beyond. Here's hoping Hailey Baldwin Bieber keeps the dusty pink shade throughout the winter doldrums. It adds a nice pop of color to her OOTD and more.