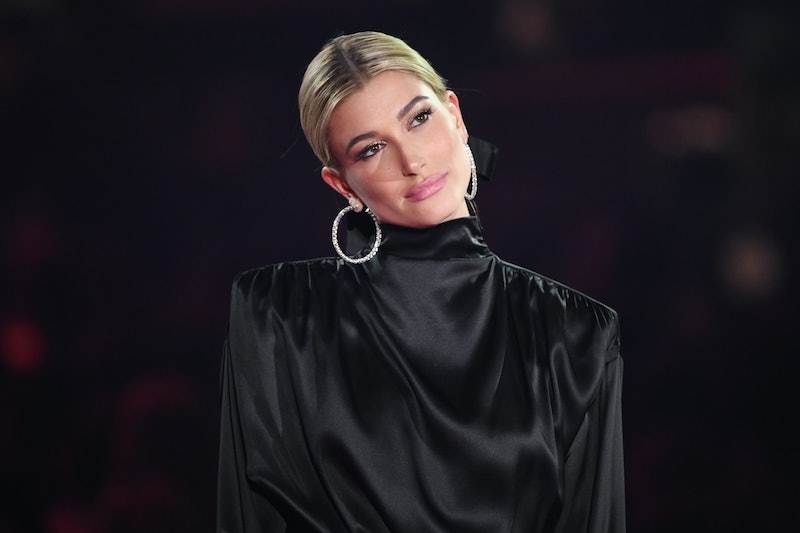 Hailey Baldwin's 19.2 million Instagram followers may think they know everything about her, but it's impossible to really know anyone just based on some videos and photos. Recently, Baldwin opened up about her anxiety, as well as the differences between what she shares on social media and what's really going on in her life.

In an April interview with Glamour, Baldwin admitted that she was "struggling horribly with anxiety—really, really bad." She also said, "I couldn't sleep." Then she began to explain that being in the public eye doesn't make her different than anyone else when it comes to these struggles. She said, "I admire people coming forward and talking about [anxiety]. We all struggle with it. I think there's been this stigma around it for so long."

"People look at celebrities who are famous or successful and think they have it all together. Like, they have such an insane career, or they make so much money, that they should be happy. But it's really kind of the opposite."

What does she mean by that exactly? Baldwin shared, "Nobody wanted to talk about what was really happening, and everybody felt like there was this pressure to keep up a facade—or pressure to keep up this perfect lifestyle and make everything look really good from the outside." And social media just adds more pressure.

Baldwin told the magazine, "First of all, I would tell everyone that lots of people don't really look like what they do on social media. Because you'll see so many people and be like, 'You're so pretty, oh my God.' But then you see them in person, and it's like, 'You're still really pretty; it's just not what you look like online.'" She summed it up perfectly when she declared, "Social media is so 'Show your best, hide the rest.'"

Even though she is a model herself, Baldwin emphasized, "I hope nobody looks at a photo of a model where they have like all this hair and makeup, and think that that's what they're supposed to look like all the time. People need to understand the contrast."

She candidly admitted, "[Everyone would say,] 'Oh, we're really happy. I'm really happy. I'm doing fine,' when really it was like you're kind of crumbling on the inside." Then, she got more personal, Mrs. Bieber revealed, "People would ask me, 'How are you?' and I'd be like, 'I'm fine; I'm good.' But really I'd be crying in my hotel room all night."

She continued to keep it real. Baldwin said, "It's hard. Things are difficult. I just think the more we are open about it, the more we can help people find solutions."

The Glamour interview wasn't the first time that the model was open about her anxiety. Baldwin shared a lot about her difficulties in a Jan. 6 Instagram post. She told her followers, "I’m a 22 years old, and the truth is no matter how amazing life may look from the outside I struggle."

She declared in that same post, "I’m insecure, I’m fragile, I’m hurting, I have fears, I have doubts, I have anxiety, I get sad, I get angry." She even admitted,

Everyone is going through something. No matter how beautiful or happy someone looks in a photo, a picture cannot tell a whole story, whether a person is famous or not.