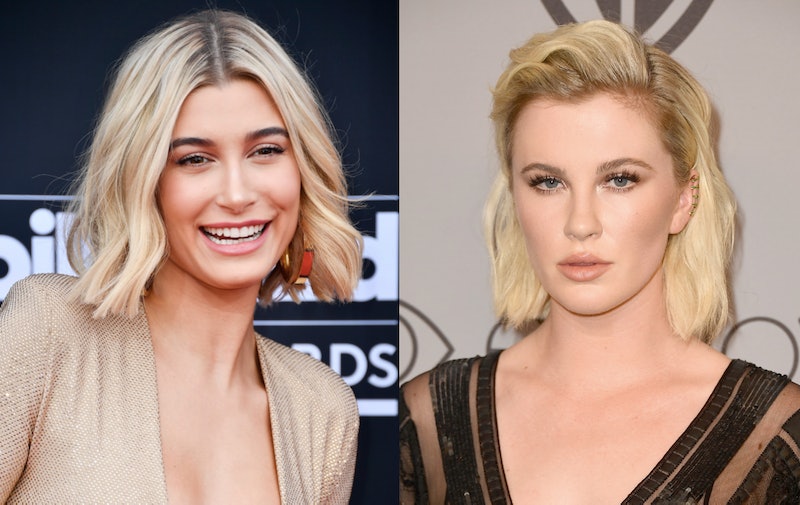 Justin Bieber and Hailey Baldwin's recent engagement has been a hot topic for the last couple days. Even Hailey's cousin Ireland Baldwin posted about the engagement, and she referenced some vintage Bieber lyrics in the process. On July 9, Ireland posted a throwback photo on Instagram of herself, Hailey, and Hailey's older sister Alaia Baldwin Aronow wearing swimsuits and playing with toys in a bathtub.

The photo is super adorable, but it was Ireland's caption that was just so on point. Ireland wrote:

"There’s gunna be one less lonely girl... and only one lonely girl left. my other chicken is soon to be a beautiful bride. congratulations to the two of you @haileybaldwin @justinbieber."

Describing her cousin as "One Less Lonely Girl" was an opportunity too good to pass up. Sure, that song title lends itself to many headlines following the engagement news during the past few days, but it's actually such a cute choice of words given the cousins' long (and very public) history as Beliebers.

The two of them have tweeted back and forth about their love for the "Sorry" singer and his music for years. Even if Hailey got engaged to someone else, it seems like her cousin Ireland still would have congratulated her by incorporating some Bieber lyrics in her caption. That's how strong their fandom has been.

In August 2012, Ireland tweeted, "Wait I love Justin Bieber's album," and Hailey copied and pasted those words with a "RT" in front of the sentiment. Just for the record, Bieber's third album Believe came out in June 2012, so that's probably the album that they were listening to at the time.

In November 2012, Hailey couldn't help agreeing with yet another one of her cousin's Biebs-inspired tweets. She copied and pasted this tweet from Ireland: "RT @IrelandBBaldwin: Justin Bieber said everything is going to be alright, therefore it is. #trustinbiebs." And of course, Hailey does "trust in Biebs" these days.

In October 2012, the cousins went to a Bieber concert together, and of course, they documented their love for his music on social media. With several posts. Ireland asked, "Who's going to the @justinbieber concert tonight?" Hailey quoted the tweet and responded with, "I am."

Hailey also posted a photo from the concert with the caption "Taking in Bieber." Little did she know, that the Baldwins would eventually be taking Bieber into their family.

Following the concert, Hailey lamented online, "Worst headache and ears are ringing. After math of a Bieber concert." Welcome to your future, girl. Marrying Bieber means years of concert tours and post-concert headaches. Maybe he should have given her a set of earplugs along with that engagement ring.

Ireland fessed up to misspelling her cousin's (possible) future last name in a March 2013 tweet. She revealed, "One time I spelled 'Bieber' as 'Beiber' and this girl punched me in the face." Hailey quoted the tweet and confessed, "that girl was me." (Here's hoping that was just a joke.)

That wasn't the first time that the future Mrs. Bieber got offended by Ireland's misspellings. In July 2014, Hailey jokingly corrected her cousin about the spelling of "Bieber" yet again. Rest assured, Ireland is well aware of the spelling now. She has to be, right? At the very least, she will definitely remember the spelling if Hailey ends up changing her name to Hailey Bieber.

Bieber has millions of loyal fans. Many of them have probably dreamed about dating him — just scroll through Twitter and Instagram. There are tons of girls who tweeted the same things that Hailey and Ireland did throughout the years. They all hoped and Beliebed that they would actually have a shot with the pop star, and now Hailey is engaged to her childhood crush. There is "One Less Lonely Girl" in this world and most stories just don't get much cuter than that.