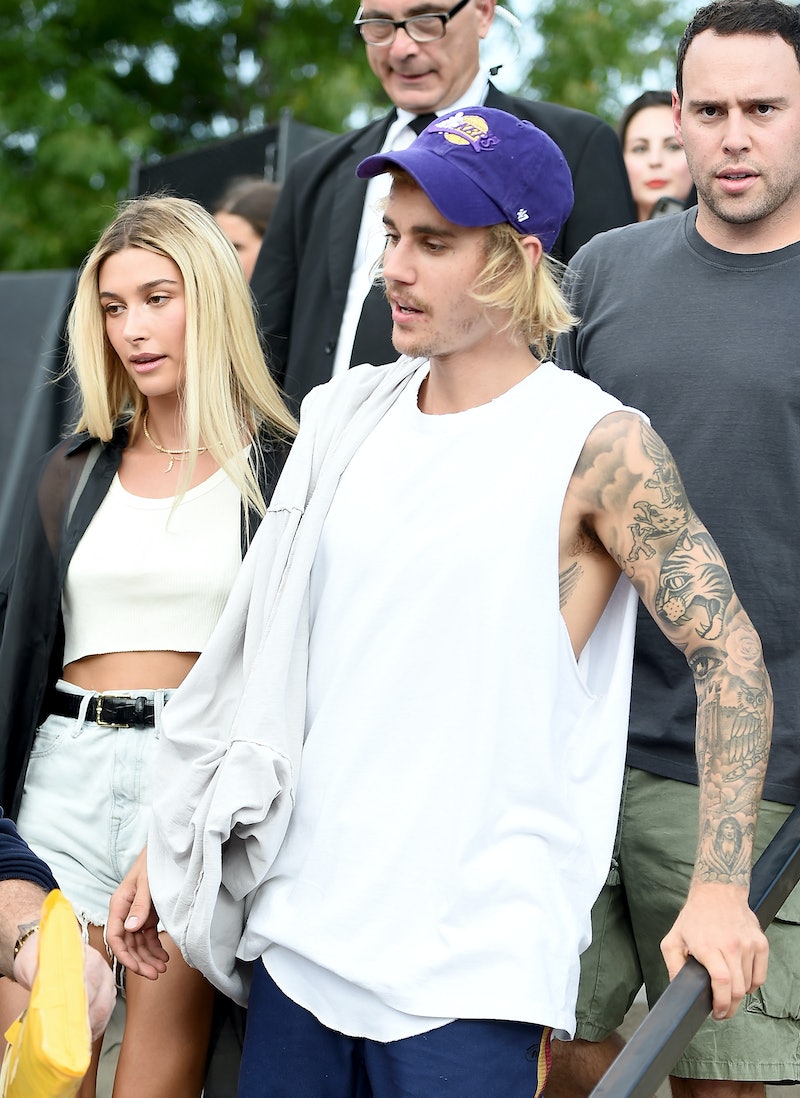 Considering how intensely private they've been about their whirlwind romance, seeing Justin Bieber and Hailey Baldwin on the cover of Vogue's March issue was more than a little surprising. More surprising, though, was how candid they both got in the accompanying interview. Like, for example, how Baldwin said her relationship with Bieber was pretty tough before it turned romantic — like, tough to the point where they barely spoke when they saw each other in public. But don't worry, they're way beyond that now.

If you've been following the Bieber-Baldwin saga for the last several months, there's a good chance you've seen the photo of the pair alongside Baldwin's dad Stephen from 2012. Stephen first introduced his daughter to the then-burgeoning pop star backstage at an event in 2009, and that — paired with their red carpet reunion photo three years later —  led many people to believe that Baldwin was a hard-core Bielieber at the start of their friendship.

"I was never a superfan, of him or of anyone," Baldwin told Vogue. "It was never that crazed, screaming thing. I didn’t think about it in any kind of way except for the fact that he was cute."

Years later, the two would cross paths again — this time at Hillsong, the evangelical Christian church with a notably celebrity following. "One day Justin walked into Hillsong and was like, 'Hey, you got older,'" Baldwin recalled to the publication. "I was like, 'Yeah, what’s up?' Over time he became my best guy friend. I was running around with him as his homie, but we weren’t hanging out [romantically]."

After Bieber and long-time love Selena Gomez reportedly broke up in 2014, rumors began to fly that Baldwin was way more than just his "homie." The two insisted that they were just friends, though, until Bieber posted a photo on Instagram that showed them smooching in January 2016. "Hailey is someone I really love," Bieber told GQ during an interview that February. "We spend a lot of time together."

Baldwin admits that they did, in fact, date for a brief period of time, but she confessed to Vogue that it did not end well. "Negative things happened that we still need to talk about and work through," she told the publication. "Fizzled would not be the right word — it was more like a very dramatic excommunication. There was a period where if I walked into a room, he would walk out." Ouch.

In June 2018, they'd end up mending fences after a conference at Hillsong. "When I saw her last June, I just forgot how much I loved her and how much I missed her and how much of a positive impact she made on my life," Bieber revealed to Vogue. "I was like, 'Holy cow, this is what I’ve been looking for.'"

One month later, and TMZ reported that the two were engaged. A few short months after that, and People announced that they'd tied the knot at a courthouse in New York City. Baldwin says it wasn't as hasty as people seem to think, though. She thought it through — a lot. "I prayed to feel peace about the decision, and that’s where I landed," she told the publication. "I love him very much. I have loved him for a long time."

Bieber told Vogue that they're both committed to making their marriage work, but it hasn't exactly been easy. "We don’t want to say the wrong thing, and so we’ve been struggling with not expressing our emotions," the singer said.

"I’m not going to sit here and lie and say it’s all a magical fantasy. It’s always going to be hard. It’s a choice. You don’t feel it every single day. You don’t wake up every day saying, 'I’m absolutely so in love and you are perfect' ... at the end of the day, too, he’s my best friend. I never get sick of him."

Despite what people may think, it seems like these two are pretty self-aware and way more mature than they get credit for. They come off as sweet and sincere, totally in love, and — most importantly, willing to work on bettering themselves for the sake of their relationship.