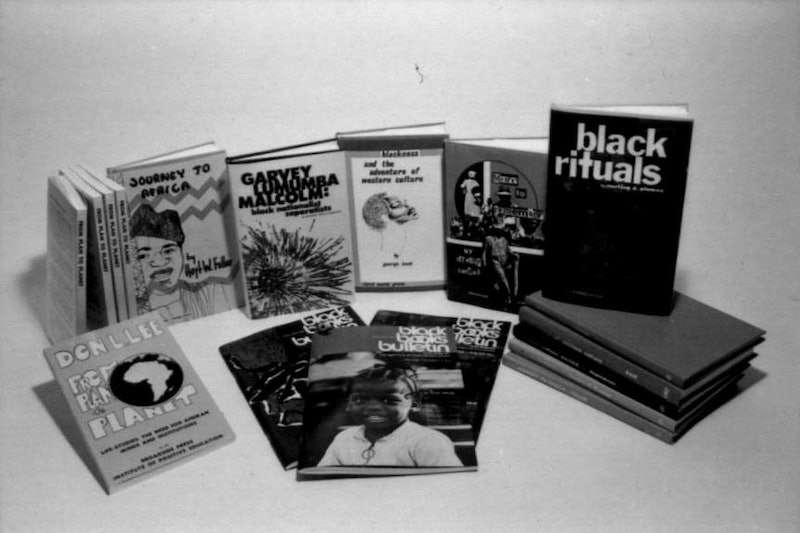 Dr. Haki R. Madhubuti, the founder of Third World Press, is in the idea business. He’s been in it since his first day of Army basic training, when he walked off the bus at Fort Linwood, Missouri, carrying Paul Robeson’s memoir, Here I Stand. Madhubuti, who at 18 still went by his birth name, Don L. Lee, was drawn to Robeson’s legacy as both a black entertainer and a critic of the House of Un-American Activities Committee.

Upon seeing Robeson’s face on the cover, Madhubuti’s white drill sergeant grabbed the memoir and held it over his head, ripping the book apart. The pages were passed out to the other recruits to be used as toilet paper.

“I decided at that point several things that would stay with me forever,” Madhubuti tells Bustle. “One, that I’m a man of action and two, that ideas, and the creative carriage of ideas, can change lives. I didn’t go out there deciding to start a book publishing company. But I knew, ‘I’m not going to be digging ditches for these bad boys.’”

Third World Press, the country’s oldest continually-publishing, black-owned press, turned 50 earlier this month , commemorating half a century in business with a week-long celebration of African-American culture in Chicago. Madhubuti, who founded Third World Press in 1967, was present at almost every speech, presentation, film screening and discussion.

Ta-Nehisi Coates and his father, W. Paul of Black Classic Press, kicked off the week, followed by Dr. Cornell West. Actor Danny Glover is an honorary co-chair, along with Susan L. Taylor, former Editor-in-Chief of Essence. The only non-black speaker was Father Michael Pfleger, a Roman Catholic priest and activist who serves a predominantly black congregation on the South Side. Black-owned hotels and event spaces were prioritized in the anniversary’s logistical planning. It’s an embodiment of Third World Press’s spirit, which at its core is “unapologetically Black."

Even over his car’s bluetooth, after a marathon of public appearances, Madhubuti, 75, is effusive, his voice often rising to a shout. The whole time he speaks to Bustle over the phone, nearly 45 minutes, he talks about art. Because art, says Madhubuti, saved his life. It’s been his refuge, his home, since he was a young teenager.

“If I had not read Richard Wright at 14, I would not be here today,” says Madhubuti. “I realized then how ignorant I was. Not knowing anything about myself, hating myself. But one book turned all that around.”

The idea for Third World Press, and its start in Madhubuti’s basement apartment on Chicago’s South Side, sprang from watching other black artists utilize their homes as spaces of invention. In 1962, fresh out of the army, Madhubuti visited what is now known as the DuSable Museum of African American Culture. At the time, it was a new collection, the first of its kind in Chicago, with the goal of promoting and preserving the African-American experience - and it was on the ground floor of founder Dr. Margaret Burroughs’ home. Soon after, Madhubuti met the poet Dudley Randall, whose press, Broadside Press, operated out of Randall’s home office in Detroit.

“I saw these two independent black institutions being started in homes and I thought, ‘Oh, I got this,’” he says.

With $400 and a used mimeograph machine, Madhubuti began publishing poetry chapbooks in his apartment. Within a handful of years, Third World Press had become a cornerstone of the Black Arts Movement, an outcropping of the Black Power Movement. Thought leaders like Amiri Baraka, Sonia Sanchez and Gwendolyn Brooks began distributing their work through Third World Press, which grew to be a full-service publishing house.

“That’s what free people do,” says Madhubuti. “Free and whole people are about creating institutional structures that are going to better the lives of their own people.”

Madhubuti credits the record-breaking longevity of Third World Press, in part, to its position within the Chicago community. Nearly 40 years ago, they purchased half a block in Englewood, a neighborhood on Chicago’s South Side, from the local Catholic diocese. Four decades and hundreds of books later, they’re still there. Madhubuti’s office is in the church rectory.

In addition to their publishing arm, which shifted into a non-profit in 2008, Third World Press has established three schools in their neighborhood, which provide over 700 children in grades Kindergarten-12th Grade what Madhubuti describes as “an African-centric education,” as well as a prison literacy program. They often donate books to educational institutions struggling with limited funding and anyone who wants to read a book by Third World Press can write a letter requesting a free copy, says Madhubuti. As long as they send back a 250-word review, the exchange can continue indefinitely. As a business model, it’s not particularly profitable - Madhubuti, for example, has never taken a salary - but the press is sustained by its cultural reputation.

The Third World Press archive will take its place alongside the papers of Madhubuti’s mentor and “cultural mother,” Gwendolyn Brooks. There, Third World Press will be at home, “forever linked,” as Madhubuti puts it, with the artists it’s dedicated a lifetime to supporting.