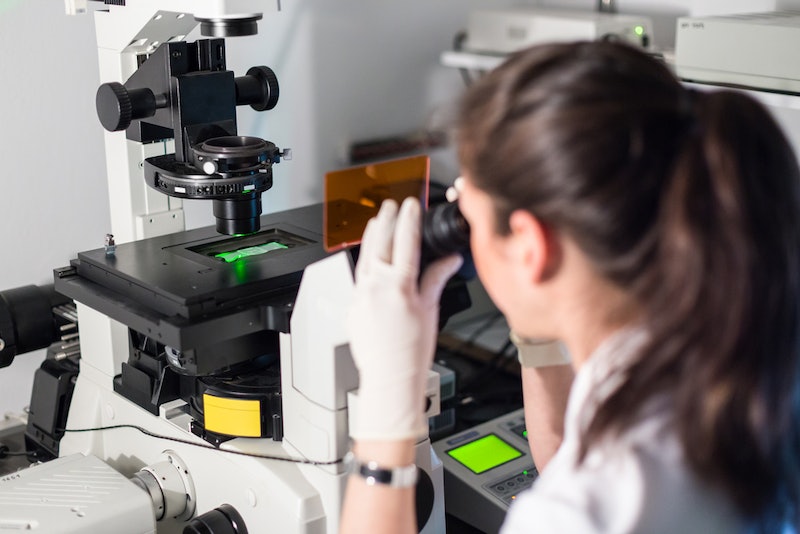 Despite serious gains for diversity over the past few decades, many jobs and industries still offer inadequate support for working mothers, especially in the U.S. For women in STEM in particular, this lack of support can be even more stark. That's the conclusion of a new study published in Proceedings Of The National Academy of Sciences by San Diego scientists, which found that nearly half of all female scientists in the U.S. left full-time STEM careers — either for part-time work or for other industries altogether — once they'd had their first child. For fathers, the drop-out rate from full-time STEM careers was still around a quarter. Behind these statistics are stark realities about how inhospitable STEM careers can be for women, and how far technology, scientific research, and other areas need to go to support the people who want to work in these fields.

The study looked at 4,206 scientists of who identified as male or female, who'd been tracked by the Scientists and Engineers Statistical Data System between 2003 and 2006. Over 800 of them had become parents in those years, while 3,365 had not. The scientists then followed their career trajectories from 2003 through to 2010 — and found that, for women and men, parenthood had a very different impact on STEM careers.

Compared to 23 percent of men, 43 percent of women in STEM had left full-time employment once they'd had their first child. Half of the women who'd left cited 'family reasons' as their motivation for going elsewhere or cutting down hours to part-time. “STEM work is often culturally less tolerant and supportive of caregiving responsibilities than other occupations. So mothers — and fathers — may feel squeezed out of STEM work and pulled into full-time work in non-STEM fields," Dr. Erin Cech, lead author on the study, said in Nature.

Women have the right to change and shift their careers as they choose as different factors appear throughout life, including parenthood. However, the findings of this 2019 study indicate that, for women in STEM who'd like to become mothers, gender equality is still a long way off — and hasn't accelerated much in the past decade. Research from 2009 found that women in science were 35 percent less likely to enter the tenure track (the road to permanent employment in academia) and 38 percent less likely to achieve tenure than fathers, and that 50 percent of female tenured scientists have children compared to 72 percent of men. Not much appears to have changed in the past ten years.

It's something that female STEM experts have written about extensively. Motherhood, they say, compromises their career in STEM in various ways; it splits their time and makes them feel out of touch. “I remember my colleagues going home and studying up and making passion projects on iOS,” iOS developer Kathryn Rotondo told The Verge in 2017. “I was going home to my baby, and still nursing at night and being exhausted and not having the wherewithal to keep up with changing tech. That made me a less valuable person on my team, and made it harder to find work when I was out of work.”

There are a lot of ways in which STEM industries, like other industries, can be inhospitable to mothers. Working Mother reported in 2012, for example, that tenure-track jobs for research candidates are typically designed for candidates with few family links: "If a candidate wins a position, she often has to relocate for it and then devote about six years to the research, teaching, publishing and grant applications necessary to create an impressive portfolio — an intensive workload that many women don't want to take on while they're raising young children."

Dr. Rebecca Calisi Rodriguez ran up against these limitations when she returned to full-time work as a scientist after having her first child. At a conference, she discovered that the 'lactation room' they'd set up for breastfeeding mothers was a few sheets in the corner of a room. "Perhaps getting so upset about a lactation room at a conference might seem silly to some. But for me, these meager accommodations represented a much bigger problem about how women are treated in this country. They represented all the physical and mental pain and suffering I had gone through after having my children while trying to succeed in what was already an extremely competitive environment," she told Scientific American in 2018.

Calisi's experience prompted her to form a group of scientists who are working mothers to provide recommendations for reforming STEM to be more supportive. The group's recommendations were published in PNAS in 2018, and are aimed at the structural and institutional problems that prevent female scientists from attending conferences. They recommend easily available childcare, meetings being arranged around childcare-friendly dates at family-friendly venues, and social networks for conference attendees who happen to be mothers.

However, the conversation about conferences is only one aspect of the fixes STEM needs to retain women. Back in 2012, Professor Wendy Williams and Professor Stephen J. Ceci suggested a list of fixes for helping female scientists after they have their first child. They put forward ideas like "stopping tenure clocks" (the amount of time you need to 'earn' a permanent position) for primary caregivers, offering a wide range of childcare, helping new mothers extend their grants, and telling HR to "ignore family-related gaps in curricula vitae."

These ideas aren't new, but the 2019 data suggests that a lot of places, from the tech community to academic scientific institutions, haven't taken them up. Want to retain female scientists after they have children? Help them take care of their kids — and rethink structures and policies that make it harder for them to do their best work with a family.

More like this
Here’s Why Sagittarians Should Pursue A Career In Academia
By Nina Kahn
Where Is Former Bachelor Host Chris Harrison Now & What Is His Net Worth?
By Hugh McIntyre
Black Women's Equal Pay Day Highlights An Upsetting Problem
By Brandi Neal
Women Around The World Are Cutting Their Hair In Solidarity With Mahsa Amini
By Darshita Goyal
Get Even More From Bustle — Sign Up For The Newsletter