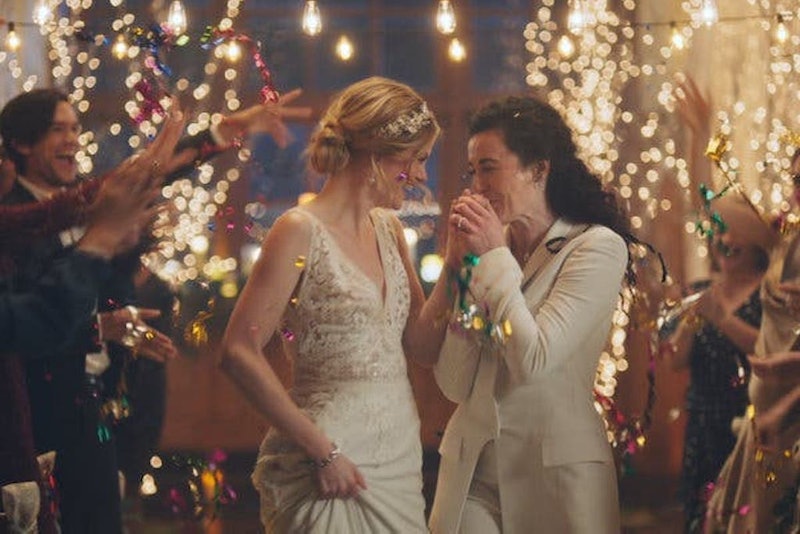 On the heels of controversy, Hallmark issued a statement about pulling ads with a same-sex couple. Over the weekend, the network pulled four TV ads from Zola, an online wedding registry service, that featured a lesbian couple after conservative group One Million Moms lodged a complaint. In one pulled commercial, two brides advertise Zola’s custom wedding website features at the altar and share a kiss. Hallmark told the New York Times that the ads were ultimately removed because the women’s “public displays of affection violated the channel’s policies.” After much backlash, Hallmark issued a statement that largely missed the mark.

Molly Biwer, senior vice president for public affairs and communications at Hallmark, said in a statement provided to various outlets, “The debate surrounding these commercials on all sides was distracting from the purpose of our network, which is to provide entertainment value.” In a separate interview, Biwer said the ads were removed to avoid network controversy, as per AP News. “The Hallmark brand is never going to be divisive,” Biwer said, as per the publication. “We’ve tried very hard to stay out of it… We just felt it was in the best interest of the brand to pull them and not continue to generate controversy.”

Zola initially submitted a total of six ads to Hallmark, and four featured a same-sex couple. When Hallmark removed the same-sex couple ads but continued to run the heterosexual-couple ads, Zola pulled all of their remaining commercials on Dec. 14. Mike Chi, chief marketing officer at Zola, told the Hollywood Reporter, “The only difference between the commercials that were flagged and the ones that were approved was that the commercials that did not meet Hallmark’s standards included a lesbian couple kissing… All kisses, couples and marriages are equal celebrations of love and we will no longer be advertising on Hallmark."

Amid the controversy, GLAAD president Sarah Kate Ellis issued a statement that read, in part, “The Hallmark Channel’s decision to remove LGBTQ families in such a blatant way is discriminatory and especially hypocritical coming from a network that claims to present family programming and also recently stated they are ‘open’ to LGBTQ holiday movies."

Hallmark’s decision to pull the ads comes after Bill Abbott, CEO of Hallmark parent company Crown Media Family Networks, said the network would be “open” to more inclusive stories onscreen, such as ones with gay leads. "We are always encouraging people to bring us stories across the board," Abbott told THR in November. "And it’s not always that simple a process where you put the word out and you get back three great scripts and three great stories.”

Abbott continued, “We put the word out that we’re doing an original series and we get 50 bad stories. So it’s not as easy as I think you’re making it sound and it’s certainly something that we do discuss consistently with our team and with our talent and with the agencies."

Meanwhile, Hallmark's attempt to avoid controversy has sparked it instead. Over the weekend, #boycotthallmark began making the rounds on Twitter as viewers called out the network for seemingly singling out the ads featuring a same-sex couple. One Twitter user, @cmclymer, wrote, "This is the lovely ad that @HallmarkChannel pulled from their broadcast after conservatives complained. A simple kiss by lesbian newlyweds. Same-sex marriage has been the law of the land for four years. LGBTQ families are beautiful." And Jon Cooper, Chairman of the Democratic Coalition tweeted, "I married my husband in 2009, and we raised 5 children together. The ⁦@hallmarkchannel⁩’s decision to cave to pressure from homophobes is very sad. Until they affirm the equality of LGBTQ families, we will #BoycottHallmark. LOVE MAKES A FAMILY."

Even the ad's director, Lauren Sick chimed in, writing, "PROUD to have directed this ad with some beautiful people and PROUD to support gay rights. #boycotthallmark."

The backlash makes one thing clear: Hallmark missed the mark with their decision to remove Zola's ad.

More like this
Ozzie’s Coming Out Scene With Kitty On 'That ’90s Show' Has Twitter Sobbing
By Brad Witter
Linda Ronstadt’s “Long Long Time” Plays A Pivotal Role In The Last Of Us
By Brad Witter
Here’s What Happens To Bill & Frank In 'The Last Of Us' Video Game
By Brad Witter
Adam Ali Hopes 'Waterloo Road' Will “Subvert” Queer Misconceptions
By Sam Ramsden
Get Even More From Bustle — Sign Up For The Newsletter
From hair trends to relationship advice, our daily newsletter has everything you need to sound like a person who’s on TikTok, even if you aren’t.