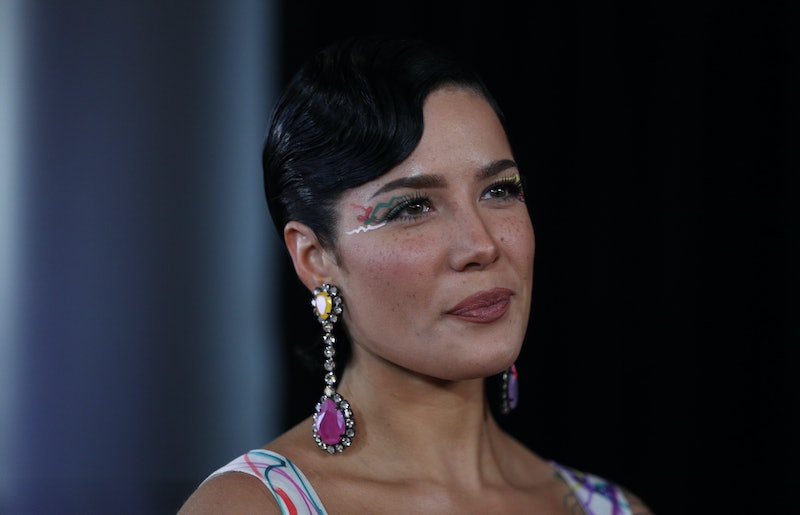 Halsey has been on the frontlines of Black Lives Matter protests, both physically and virtually, since the tragic killing of George Floyd by Minneapolis police officer Derek Chauvin. Now, she's speaking out about the horrifying things she has witnessed. Halsey called out "violence" against Black Lives Matter protesters in an Instagram post on Monday, June 1, saying that she treated several people injured by rubber bullets that were reportedly shot by police officers.

Halsey shared her experiences at Los Angeles protests in an Instagram slideshow, which included pictures of her treating a protester's wound, a snapshot of her first aid kit, and footage of armed guards shooting tear gas and rubber bullets at peaceful protesters. In one video, the singer can be heard saying “We’re standing here, we’re doing nothing and they’re still advancing," in reference to officers threatening protests.

"It’s easy from the comfort of your home to watch looting and rioting on television and condone the violent measures being taken by forces," she captioned the post. "What you don’t see is innocent peaceful protestors being shot at and tear gassed and physically assaulted relentlessly. You think it’s not happening, it’s only the 'thugs' and the 'riots', right? The police are keeping you safe right? You’re wrong. This is happening everywhere." The singer went on to explain that "innocent people exercising their rights" to protest are being forced to deal with "violence and abuse of power" from officers that are supposed to protect them, echoing the sentiments of BLM protesters across the country.

Halsey first revealed that she helped treat wounded protesters in a tweet on Sunday, although she was "not qualified" to do so. On Instagram, she described the severity of the injuries that she saw, saying that medical professionals are too "exhausted" with COVID-19 to treat protesters. "I have first hand treated men, women, and children who have been shot in the chest, the face, the back," she wrote. "Some will lose vision, some have lost fingers. I have been covered in innocent blood."

She concluded her post with a criticism of Donald Trump for his threat to use the military against U.S. protesters, and a plea to citizens for help. "With Trump’s decision today to enforce the mobilization of armed forces on our own citizens, this has escalated beyond your privilege and comfort to not care," she concluded. "Please care. We are begging you to care. This is war on Americans. This is everyone’s problem. Everyone’s."

More like this
Miss Thailand's Soda Tab Gown At The Miss Universe Pageant Had A Special Meaning
By Brad Witter
8 Charities To Donate To During Black History Month
By Alexis Morillo
Twitter Is Identifying With Sally Field & Jane Fonda’s Friendship In New Viral Video
By Jake Viswanath
Cruz Beckham Teased New Music With An Adorable Nod To Mom Victoria Beckham
By Stephanie Topacio Long
Get Even More From Bustle — Sign Up For The Newsletter
From hair trends to relationship advice, our daily newsletter has everything you need to sound like a person who’s on TikTok, even if you aren’t.