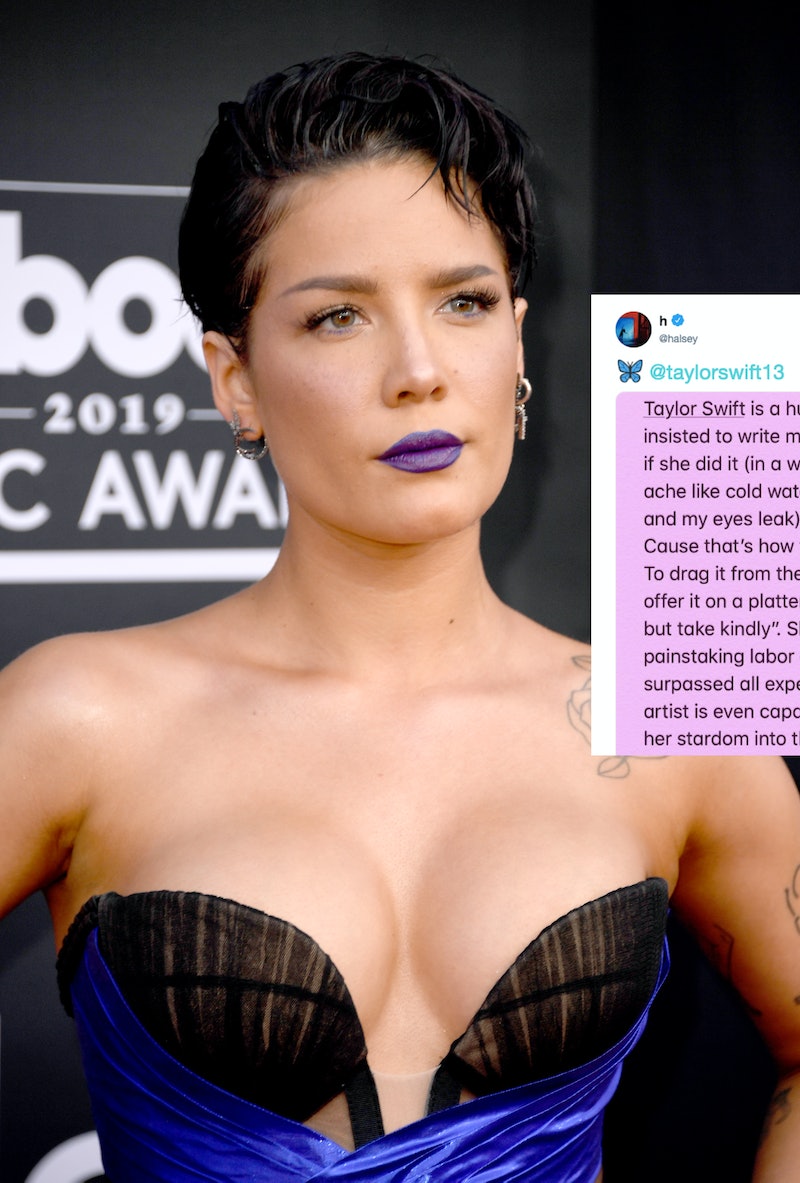 In the hours that have passed since Taylor Swift called out Scooter Braun and Big Machine Records in an impassioned blog post, one of her fellow artists is speaking up. On Sunday night, Halsey defended Swift in a tweet of her own, sharing how much the "Me!" singer has inspired her in her own career and what it means to her that Swift is speaking out for writers' rights.

The situation began unfolding earlier in the day on Sunday, when Swift took to Tumblr to update fans on what's happening with her music after it was announced that Braun had purchased Big Machine Records, the label she released her first six albums under. In her post, she claimed that Braun had made her the target of his "incessant, manipulative bullying" for years, explaining how upset she was that he would now own the master recordings of her entire catalog of music. And now, other celebrities are coming forward to share their thoughts on the subject, and it seems like Halsey supports her 100%. (Bustle previously reached out to reps for Braun and Swift for comment on the situation, but did not receive an immediate response.)

"Taylor Swift is a huge reason why I always insisted to write my own music," Halsey wrote in her tweet. "I believed if she did it (in a way that made my teeth ache like cold water and my heart swell and my eyes leak) than [sic] I should too. 'Cause that's how to make someone feel. To drag it from the pits of your heart. To offer it on a platter and say 'take some but take kindly.'"

Halsey went on to say that believes Swift deserves to own her own music — and what this deal means for the rights of songwriters everywhere, especially the ones who are women. She continued:

"She deserves to own this painstaking labor of her heart. She has surpassed all expectations of what any artist is even capable of. She catapulted her stardom into the Milky Way. And as much as it turns my guts that no matter how much power or success a woman has in this life, you are still susceptible to someone coming along and making you feel powerless out of spite. It speaks volumes to how far we have come in the music industry. The way writers are treated. How as an entertainer you are respected but as a writer you're walked all over. Even when you're both in one single body. I am standing with her."

After Swift shared her Tumblr post, Justin Bieber — who is managed by Braun and who Swift accused of bullying as well — took to Instagram to apologize and defend Braun at the same time. Scott Borchetta, the former Big Machine owner who sold to Braun, also weighed in on the situation with a post on the record label's blog, sharing his side of the story with texts that he reportedly sent to and received from Swift, along with part of the contract that was offered to her when she declined to re-sign with Big Machine, instead opting to go with Universal Music Group for her future releases.

Since sharing her initial Tumblr post, Swift has remained silent on the matter. But considering how many people are now weighing in, it seems like this discussion is only just getting started.