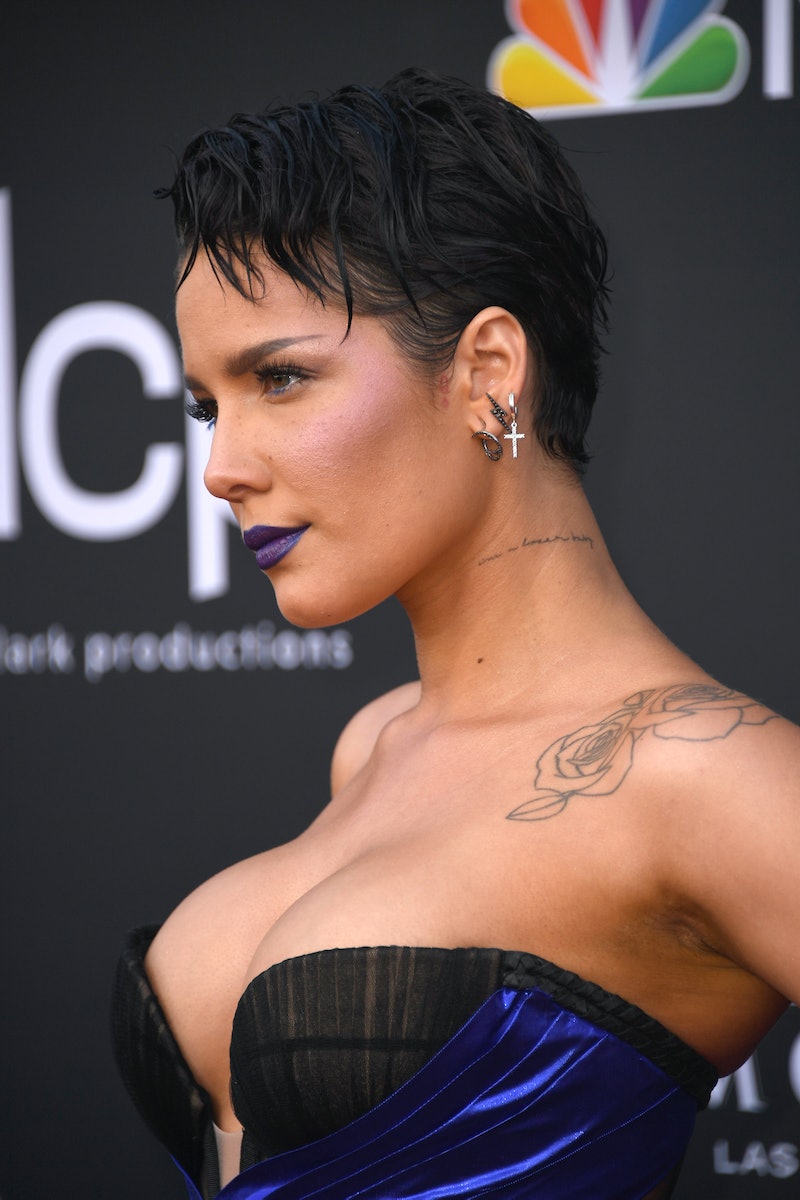 Wednesday evening's red carpet for one of the most important nights in music is well underway, and Halsey's 2019 Billboard Music Awards outfit has fans doing a double take. For this year's show, the singer wore a beautiful indigo blue and black gown — that she matched with her lipstick — complete with a thigh-high slit that exposed her left leg, strappy black pumps, and her beautiful thigh tattoo. The singer paired the look with a few simple jewels from A Little Too Much, namely a few black and silver statement earrings — which included a cross and lighting bolt — as well as stacked diamond rings on her index finger, and singles on both of her ring fingers. As for hair, Halsey opted for a sleek, tapered pixie cut with subtle side bangs, created by hairstylist Florido Basallo using Matrix products.

For her first performance of the night, Halsey switched into a red leather peplum bodysuit, with broad belts around the waist and right shoulder. Later on, Halsey hit the stage for a second time to perform the song "Boy With Luv" with hit K-pop group BTS tonight as well, and fans went wild. For this performance, the pop star wore her hair in a black bob, and a beige, oversized pantsuit.

But during last year's red carpet, the 24-year-old wore a completely different look, rocking a black, strapless, mini, bodycon dress with a fluffy tulle train, showing off her glorious arm tattoos. The singer adorned her feet with strappy, black pumps with pearl embellishments and rocked her hair in a center-parted updo, keeping out a few loose waves in the front. As for jewels, Halsey wore statement black earrings and a bold rings on each of her middle fingers.

Fashion aside, Wednesday could prove to be a big night for the singer, seeing as she is nominated for two awards this year: Top Female Artist and Top Selling Song.

Whether she takes home a statue, or not, Halsey will always be supportive of her fellow female artists, namely fellow pop singer Ariana Grande who she's up against for the Top Female Artist award. “I will say one thing about my generation of artists: We are just not f*cking having it," she told Glamour in January when asked about competition amongst women in the music industry. "If you open any of our text messages at any given time, all of us are just like, ‘Yo, I love your new record. When are you leaving for tour?’ We’re so supportive."

In terms of her taking the stage, this certainly isn't the first time the superstar was poised to captivate audiences. In 2018, Halsey was joined by the Chainsmokers to pay tribute to Avicii who tragically passed away just a month prior to last year's show. "Everyone that worked with him would agree that he was such a joy and it makes this tragedy all the more painful," she said. "And it’s a reminder to all of us to be there and to support and love all of our friends and family members who may be struggling with mental health issues.”

It's clear to see that not only does Halsey have a great fashion sense, but she also has a great heart.