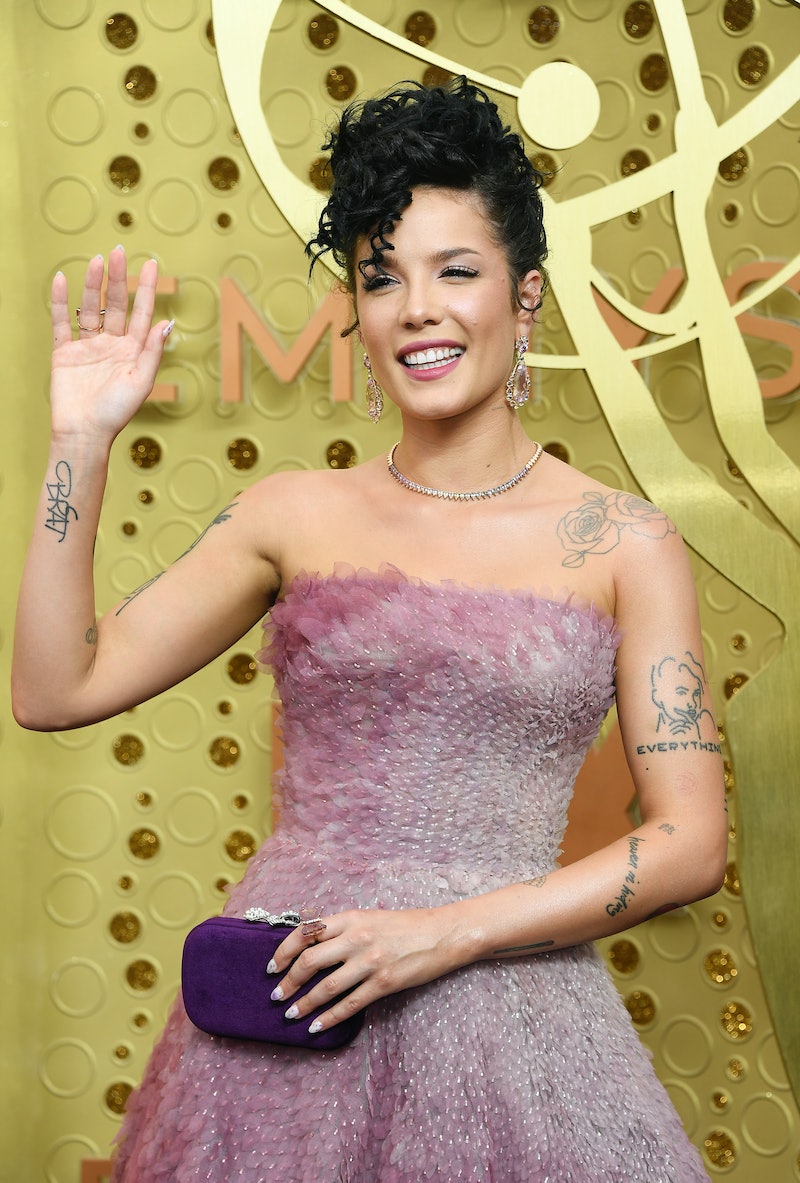 While there were plenty of contenders for Best Dressed at the 2019 Emmys, Halsey's curly hair might have cinched the award for Best 'Do. The singer will perform during the In Memoriam Tribute, and while her entire look for the occasion was fabulous (more on the dress later, I promise) Halsey's updo definitely turned heads.

The look was created by celebrity hairstylist Florido using Joico products. It definitely gives off some of the best '80s prom vibes, but looks totally modern as well. Halsey loves to play around with different hairstyles, and, until recently, we rarely get a glimpse at her natural texture. In fact, one of the first times was in 2018, when she posted a photo of her hair in its natural state. When fans commented it looked like a wig, Halsey shot back on Twitter, saying "i can’t believe I spent a whole damn year growing out my curls under those wigs for y’all to say my natural hair looks like a wig... some f*cked up sh*t lmao." Since then, Halsey's been wearing her hair out more often, but she certainly hasn't given up on switching the style around just about every time she makes an appearance. "These days we like working with our natural texture," Florido tells Bustle. "For the Emmys, after seeing the beautiful dresses, we opted to go with something a little more refined, chic, and fun."

To complement her curly locks, makeup artist Denika Bedrossian used NYX Cosmetics to give Halsey a sweet, pinky glow. In a press release, Bedrossian revealed she applied the rosy, liquid lipstick with her finger to give it a stain-like look. Makeup is another area the singer loves to experiment with, going effortlessly from girly looks like this one to Euphoria-esque green eyeshadow and everything in between.

Now, let's get back to the rest of the outfit, shall we? In keeping with that aforementioned '80s prom theme, Halsey wore a fluffy, purple, ombre gown that, from far away, seems to be made entirely of feathers. Upon closer inspection, however, it's clear that the effect comes from thousands of tiny pieces of flowy fabric. It is seriously stunning and matches perfectly with the Emmys carpet, which was also purple this year — apparently to "honor Hollywood royalty." Halsey's regular stylist Zoe Costello put the look together, finishing it off with a deep purple clutch and silver jewelry with lilac-colored stones. The teardrop earrings are SUTRA Jewels Rose Gold Kunzite New Earrings, according to the brand.

The 71st Emmys marks Halsey's first time at this specific award show, though she's no stranger to performing at other ones. For the In Memorium portion this year, Halsey performed an acoustic cover of "Time After Time" by Cyndi Lauper. She changed before going on stage: For the ceremony, she was wearing a short, black dress with a long train. While her curly hair and sparkling eye makeup appeared to remain the same as it was on the carpet, she swapped her pink lipstick for a deep, matte red. The entire ensemble was incredible striking under the spotlight.

The looks showed off Halsey's ability to rock just about any style of outfit — whether it's a fluffy, purple, cupcake of a dress, or a sleek, sheer LBD.