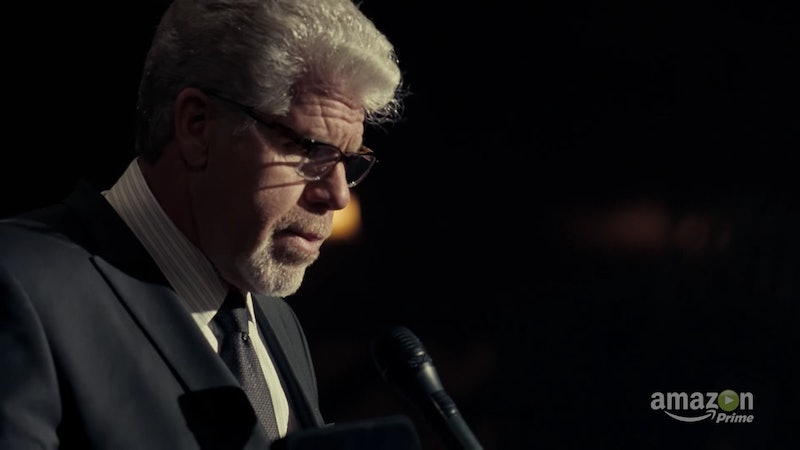 One of Amazon's first-ever original series, Hand of God, will see all of its Season 2 episodes drop on Mar. 10. Will Hand of God return for Season 3? Unfortunately, the series was cancelled by Amazon in fall 2016, right after news broke that Hand of God was renewed for Season 2. That means after the Season 2 finale, there will be no more episodes of Hand of God. Luckily, the series creators know about the cancellation before Season 2 began, so they had a chance to wrap things up in time for the finale.

Unfortunately, Hand of God didn't become a hit. It happens to all networks, including streaming ones. And the series never quite became a hit with critics, perhaps making it difficult for viewers to find the series among all of the other streaming options. But the online retailer/production company is trying out plenty of new series that could — or in some cases, already are — more successful. Here's a few series that look like they could take the place of Hand of God as your new favorite streaming series on Amazon. Between popular shows on their second or third seasons to pilots that will have their first season dropping this year, the service has plenty of other options to check out.

On the chance that you haven't watched this Amazon series, you need to check it out. It's unique not just because it's one of the few series about a transgender protagonist, but because the Pfeffermans, the family at the center of the series, is so idiosyncratic, a group of narcissists who are somehow equally as open-hearted as they are self-involved.

The upcoming series had one of the most impressionistic pilots Amazon has ever produced, based on the autobiographical novel by Chris Kraus. Directed by Jill Soloway (also behind Transparent), the series should be a meditation on femininity, desire, all that great stuff. And Kathryn Hahn is giving a performance that already dwarfs her costars (even a very entertaining Kevin Bacon as Dick, who is as macho as his name).

Mozart In The Jungle

This Golden Globe-winning series is probably going to stick around as long as it keeps being nominated for awards. And while it's incredibly corny, it's also a very fun, non-guilty guilty pleasure that's like a magical realism story where the magic is the ability to play classical music. Not unlike Hand of God's central premise.

Some of my other selections might seem a bit unconventional for a fan of Hand of God, since none of them are about justice, manly rage, or procedural. But there is Bosch, a detective series based on the series of novels by Michael Connelly that's pretty fantastic.

Similarly, this series about a petty thief and conman who adopts the identity of his former prison cellmate in order to start one of his most elaborate cons yet. The series received positive reviews when it was released earlier this year, and that's probably because of the show's wonderful cast, including Cranston and Margo Martindale.

Hand of God often attempted a kind of absurd humor, and that same dark, humorous tone is reportedly very successful in Patriot, a late-February 2017 release for Amazon. The satire centers around an unsuccessful spy whose lack of passion for spying leads him through a series of blunders and an absurd journey towards being a folk singer.

Even after Hand of God comes to an end after its second season, Amazon will continue to have plenty of offerings that make the service worth a stream.

More like this
Nicola Coughlan Shared A Lady Whistledown Excerpt From ‘Bridgerton’ Season 3
By Grace Wehniainen, Alyssa Lapid and Sam Ramsden
UK Viewers Will Have To Wait To Watch The Handmaid’s Tale S5
By Maxine Harrison
A New 'And Just Like That' Table Read Pic Confirms A Key Character's Return
By Jack Irvin and Grace Wehniainen
This Episode 6 Moment Foreshadows Viserys' Fate On 'House Of The Dragon'
By Grace Wehniainen
Get Even More From Bustle — Sign Up For The Newsletter