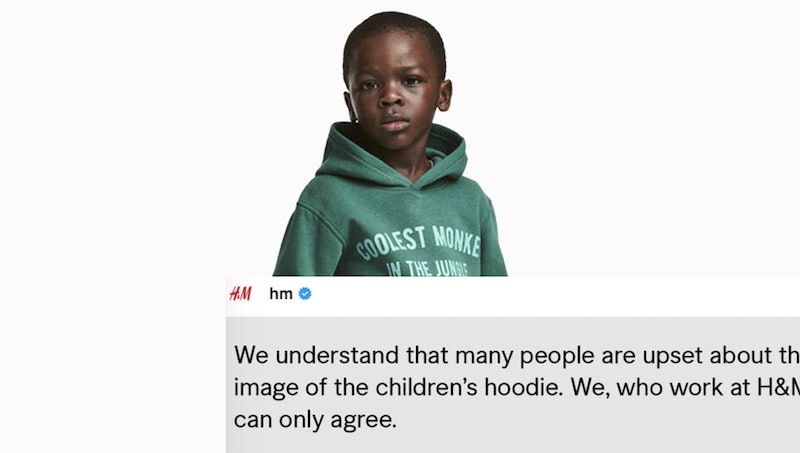 As long as there is fashion, there will be conversation around it — and sometimes those conversations are hard to have. H&M is under fire for selling a children's sweatshirt that reads, "Coolest Monkey On The Playground," which was modeled by a black child on the website. People pointed out the racist tones of the image and sweatshirt, forcing the company to apologize. The image may be pulled from H&M's site, but the conversation is far from over.

The graphics trend in clothing has allowed people to put pretty much anything on a T-shirt. There's been empowering slogans like "The Future Is Female" and not-so-empowering ones, like H&M's latest controversial sweatshirt. The sweatshirt was first brought to attention by New York Times columnist Charles M. Blow, who tweeted the photo out on Jan. 7 with the caption, “@hm, have you lost your damned minds?!?!?!”

The term "monkey" has been used as a racial slur for the black community for decades. As a Huffington Post column explains, the term can be traced back to literature and film, stating that "animalization and even bacterialization are widespread elements of racist dehumanization."

Since the sweatshirt has gone viral, people have pledged not to shop at the store, and The Weeknd, who has been featured in ads for the company, has cut all ties with the brand.

H&M didn't give a reason for why they chose the slogan or allowed it to be printed, shot, and sold on their website. Instead, they are claiming that the broken protocol is to blame.

"We understand that many people are upset about the image of the children's hoodie. We, who work at H&M, can only agree," the Instagram photo reads. "We're deeply sorry that the picture was taken, and we also regret the actual print. Therefore, we've not only removed the image from out channels, but also the garment from our product offering.

"It's obvious that our routines haven't been followed properly. This is without any doubt. We'll thoroughly investigate why this happened to prevent this type of mistake from happening again."

The post doesn't cite a single person who made the statement, rather indirectly attributes it to the brand. According to Twitter, H&M spokeswoman Anna Eriksson said, "this image has now been removed from all H&M channels and we apologize to anyone this may have offended."

Twitter users have pointed out that the fact that this shirt was not vetoed by someone means not enough diversity and critical thinking is in the design approval process of the fast fashion brand.

Since the shirt has gone viral, people of color have spoken out about the brands problem in the past and other have shown their concern about a major brand making this type of mistake.

It's a racist term, and people are seeing it as just that.

There's more to the story than just a slogan, sweatshirt, or photo. It's an institutional problem.

Some users are saying the sweatshirt will change their shopping habits.

The more you know. Please allow this kid to give you a refresher on why this is a problem — intentional or not.

There's an easy way to make sure this doesn't happen again — add more black creatives in the mix.

It's up to H&M to decide where they will go from here, but it's also on the consumer to make a choice about where they shop. And it seems many people of color have already made up their minds.