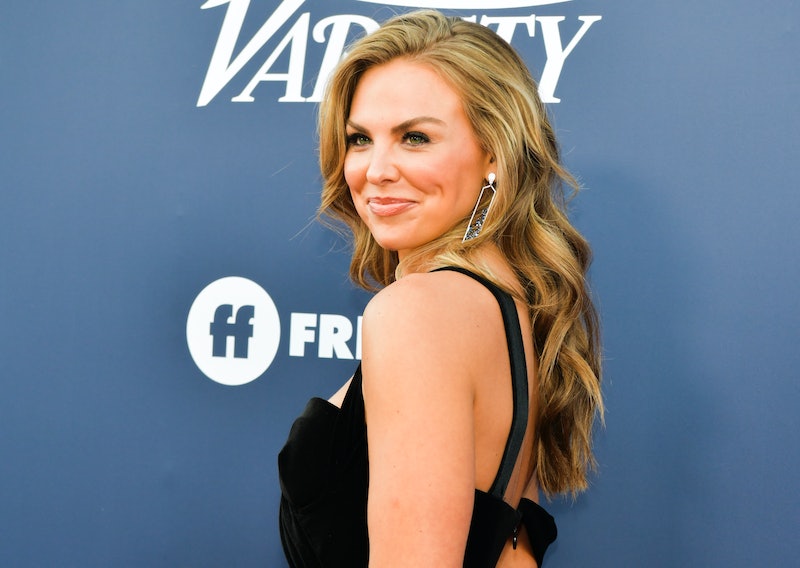 It feels like everyone is talking about how Bachelorette star Hannah Brown might feel about the news of Tyler Cameron's romance with supermodel Gigi Hadid. Bachelor in Paradise alum Krystal Nielson told Entertainment Tonight that she talked to Hannah about it the day after the story broke — and Krystal had encouraging words for Hannah about the Tyler and Gigi situation.

The newlywed said Hannah "felt a little hurt with Tyler." Her husband Chris Randone jumped in with "and still hurt with Jed [Wyatt]." Hannah got engaged to Jed during the pre-taped portion of her Bachelorette season finale, but she broke it off with him after she found out he was in a relationship during filming of her season.

During the live portion of the episode, Hannah asked Tyler out for drinks, which he did agree to. He was even reportedly spotted leaving her new Los Angeles apartment the next morning, as reported by People and many other media outlets. It seemed like there might have been hope for a Tannah resurrection, but then he was seen out and about with Gigi just a couple days later. Many times over.

Krystal told Entertainment Tonight, "We had a big talk with her, and one thing that I realized in hanging out with Hannah is that everyone who would come up to her would just talk to her, but no one was asking her questions."

In addition to telling the Alabama native that it "it's not easy," Krystal had more to say. According to ET, she let Hannah know, "You don't need to be perfect. You don't need to be a strong woman to get through this with Tyler. It's OK to open up your heart and share you're hurt and struggling."

Krystal continued, "I go, 'You've been a strong, amazing lead because of your vulnerability and your willingness to show your imperfections and embrace them and love yourself. And that's why America loves you. So, don't forget that throughout this process."

That is so true. Both on the show and off, Hannah has been very open about her feelings. On Aug. 12, Hannah shared a photo of herself standing in front of the waves with the caption "crash and burn." When an Instagram follower commented, "this is how your season went," Hannah agreed and wrote "yep."

The next day, Hannah poured her heart out in a very emotional Instagram post, where she admitted, "I'm struggling."

Still, Hannah made sure to emphasize, "I am not complaining about this past year of adventures." She said she has gained a lot from her time in the spotlight, even with the heartbreak. Hannah declared, "The woman who has emerged would shock the mirror-image young girl from a year ago."

She even wrote, "Maybe I needed write this out to remind myself I’m human and it’s okay to be overwhelmed. And maybe, I just needed to remind you guys too." And that is why she is such a beloved Bachelorette. Who cannot relate to that sentiment?

Hannah has grown so much in such a short period of time. Luckily she has a positive support system and a strong sense of self to help her navigate this new life.