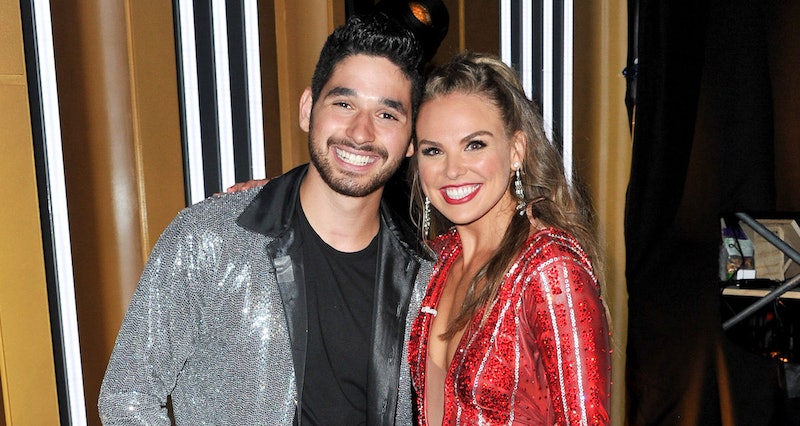 Hannah Brown's Alabama Hannah moniker has resurrected on Dancing With the Stars. Hannah responded to rumors that she’s dating her DWTS partner Alan Bersten with a major callback to her time on the Bachelorette. She departed Season 15 of Bachelorette in July sans partner and has since joined Season 28 of DWTS. Hannah and Bersten have since become the subject of dating rumors due the couple’s onstage chemistry. During an Instagram Q&A on Bersten’s Instagram Story on Sunday, Sept. 29, the two finally set the record straight.

While at dinner with Brown, Bersten fielded a series of questions from fans that range from snack preferences to whether or not his partner gets “hangry.” When the two get to the question in regard to romance rumors (“are y’all a thing ??”), she looked into the camera and joked, “Yeah, we’re a thing. Team Alabama Hannah!”

Brown, of course, received her Alabama Hannah moniker during her introductory stint on the Bachelor franchise. She first appeared in Season 23 of the Bachelor opposite Colton Underwood in 2019. Due to her country girl roots and hometown of Tuscaloosa, Alabama, fans dubbed her Alabama Hannah. She last appeared in Season 15 of Bachelorette in July, where she left the series alone after breaking it off with Jed Wyatt for his lack of transparency over a past relationship.

Former Bachelor alum Demi Burnett has also weighed in on the possible romance between Brown and Bersten. During an interview with former Bachelor star Nick Viall on his podcast Viall Files on Sept. 26, Burnett discussed her life after Bachelor in Paradise and shared the explicit DWTS advice she bestowed upon the Bachelor Nation alum. When Viall asked Burnett about Brown and Bersten’s rumored romance, she said, “I don’t know. I told her, ‘Don’t sh*t where you eat.”

“I don’t know if there’s any chemistry,” Burnett continued. “I don’t want anyone putting all that pressure on her.” She didn't rule out the possibility of the two becoming an item as the season progresses, though.

“That would be a dream. It would look so amazing for ABC,” Burnett said. “The Bachelorette, we accidentally gave her a really crappy fiancé so let’s give her a hot and single dance partner on Dancing With the Stars.”

Whether the rumors are fact or fiction, Brown has also spoken on the possibility of romance prior to DWTS’ Season 28 premiere. In an interview with Entertainment Tonight prior to the Sept. 16 premiere, Brown revealed she wasn’t focused on her “love life right now at all.” Speaking about how the dances make her feel “confident” and “sexy,” she said at the time, “I’m not really thinking about [a potential partner] when it comes to confidence and feeling sexy. I think that’s more for myself to know that I’m all those things.”

“It's a lot more than just dancing, this whole journey,” Brown told ET. “I definitely learned that it’s really about the journey of self-exploration and discovery and becoming a more full, whole woman.”

While Brown and Bersten's romance status isn't as transparent, one thing is clear: Alabama Hannah is back — this time with dancing shoes.