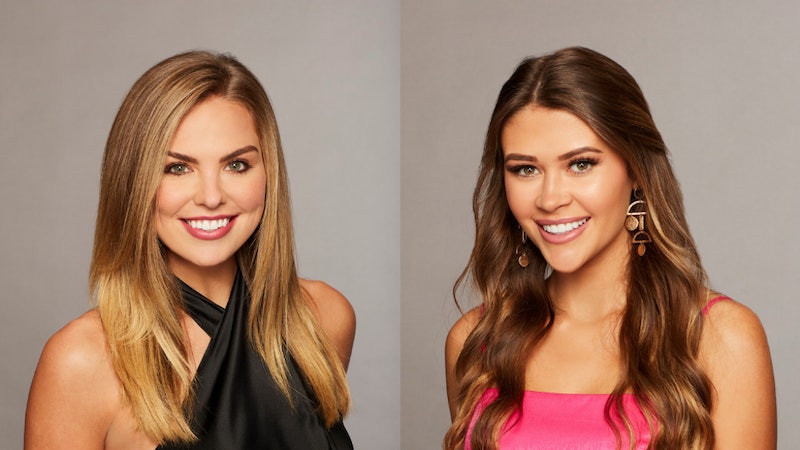 As soon as it was announced two of the newest Bachelor contestants were pageant players who competed in the Miss USA pageant together, viewers knew that it could have gone either of two ways — these women were going to love each other, or they were going to hate each other. Turns out, it's both! Caelynn and Hannah B., the former Miss North Carolina and Miss Alabama, respectively, used to be friends, and now they're not. Then, Hannah B. told Colton on The Bachelor all about their pageant days, and it was the rookiest of all rookie mistakes that a person can make on the show. Doesn't she know that even on The Bachelor, the snitches get stitches, so to speak?

Hannah B. maintains that her friendship with Caelynn got ugly after they were done competing, mostly because Caelynn was allegedly manipulative and mean and a whole bunch of other words to Hannah B. Hannah B. doesn't trust Caelynn in this process, so you know what she thought she had to do. Although millions of Bachelor fans screamed, "No, Hannah B., you have so much more to live for," Hannah B. opted to talk to Colton to tell him all about that time that Caelynn was mean to her, thus tattling on Caelynn and breaking one of the strongest rules on The Bachelor.

This show has pushed its own boundaries in recent years, but one thing has not changed — the woman or man who rats out a fellow contestant is the one that gets sent packing. It's never the person being spoken about. Hannah B. has grown up with The Bachelor on the air, so she should have known this rule. And fans thought so, too.

They Had To Watch The Car Crash

You just can't look away.

They Were Immediately Dismayed By Hannah B.'s Chances

The odds are not in her favor.

Hannah B. saw that backfire.

They Thought Caelynn Needed To Cool It In Her Faux Grief

Hannah B. told on Caelynn, Colton was all, "huh, what," and then he turned right around and gave Caelynn the group date rose. Caelynn cried the whole time after, which, whatever, but, honestly, Hannah B. should have known she would be the one who would look bad after that conversation. Tattling rarely benefits the tattler, and this is way too early in the game for anyone to bring this dirt up. Caelynn says that Hannah B. is lying, Hannah B. just announced that she's a "beast" and she's ready to go toe-to-toe with Caelynn, and guys, this is all just too soon.

It's hard to say if Hannah B. or Caelynn will end up going home next week because if producers really knew what was good for them, they would set up the best two-on-one date of all time. Leave someone on an island! That's the kind of pageant drama Bachelor fans want and need.