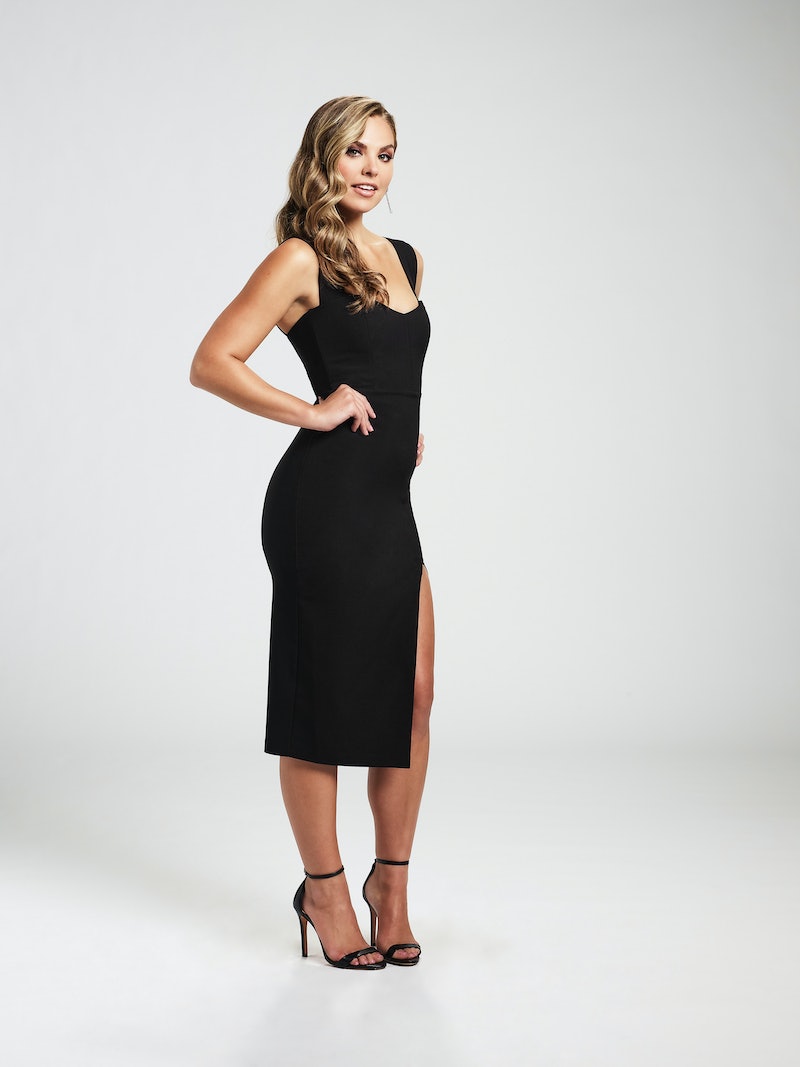 Because her relationship on The Bachelorette didn't fare as well as she wished, Hannah Brown's Dancing With The Stars partner may be just the kind of companion she needs right now. She's been through quite the chaotic journey over the last year, and now, it's time for her and a new friend to dance it all out like everyone's watching, because they totally are. And hopefully, they'll do well enough to take home the coveted mirrorball.

The pair have already begun rehearsing together, per Brown's Instagram, but no one knows who she's been practicing with just yet. The big reveal will take place during the season premiere on Monday, September 16. However, on September 10, Entertainment Tonight published footage of the moments that led up to their introduction.

It took place in a familiar spot for Hannah, The Bachelorette mansion. And in true Bachelorette style, her partner stepped out of a limo to reveal his identity. But first, Chris Harrison appeared — not to be her dance partner, but to give her one of his infamous pep talks.

"You know how I always say, 'Break a leg?' Don't do that this time," Harrison told her. "Let the journey begin." Footage of a foot stepping out of the limo is all viewers get to see of her partner. Hannah greeted him with a coy, "Hi!" She said she hopes this relationship and this reality TV stint end "a lot better than the last time." She added that she's ready to move on with her life, and she's hoping that focusing on dancing will help. "I need to focus on the sparkles right now and me," she said. "I need to fill my cup back up, I think."

Keeping her partner's identity on lock is a challenge she's been primed for with her Bachelorette season's dramatic ending. "Keeping the ending of The Bachelorette a secret [was harder than keeping my partner a secret]," she told ET. "Especially with how it ended, when I just wanted to... cry, scream, hit someone." Hopefully, that won't be the case by the DWTS season's end.

As previously mentioned, Brown has already shared a few small clips from behind-the-scenes. According to People, she posted a video of her twirling and clapping in a white circle skirt and heels. “Being a boss(y) a$$ b*tch in rehearsals," she wrote. In another clip, she balanced, on her chest, on top of a stand with wheels as if she was flying mid-air. “‘Hannah, practice the dance while I look over something,'” she wrote, likely quoting her partner. She responded to her own caption by writing, "'Sure, sure, sure.'" The teeniest corner of a male face is visible in the clip, and could have been an accidental partner reveal, but it's difficult to identify who it might be.

Among the professional partners available are Alan Bersten, Brandon Armstrong, Gleb Savchenko, Keo Motsepe, Sasha Farber, Val Chmerkovskiy, and Pasha Pashkov, according to Us Weekly. The fella in the clip appears to be dark-haired and dark-eyed, but that doesn't necessarily narrow it down, as many of the contenders boast those qualities. So fans will have to watch the premiere to find out which lucky guy gets her final rose — err — dance?