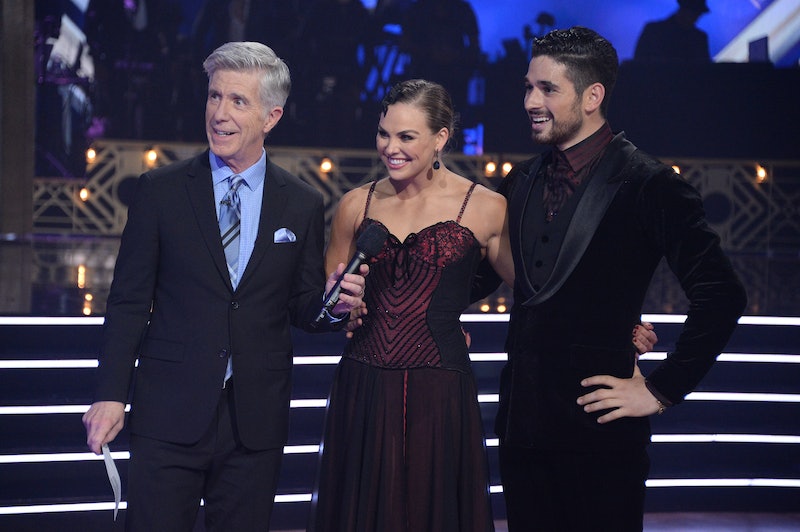 The race for the Mirror Ball is on once again in Season 28 of Dancing with the Stars, and this time, former Bachelorette Hannah Brown is taking the stage with her partner Alan Bersten. This week saw Hannah struggle with some rib pain, win a People's Choice Award, and officially advance to the semifinals. Read on to find out about everything that happened in the week leading up to this performance in Hannah's DWTS diary.

We're doing a tango and a salsa this week, so Alan is up early choreographing our dances. I have my master interview first, where I discuss how I feel about my scores last night and how I feel going into this week. We did a salsa for our dance-off, which was really fun, and now we're going to be doing a salsa again. The only problem is that my ribs are kind of hurting.

We start with the tango, which I haven't done yet. I really like it — I like anything that's in frame — and this one is a little more aggressive. We're doing it to a BTS song. I'm not all the way into K-pop, but everybody knows BTS, and the song is actually pretty good. I really like the dance, and I learned it all in one practice. We still need to clean up some things, of course, but we'll work on the salsa tomorrow.

I have some interviews later on in the week, so I also had a styling appointment for those after practice. Then I ate half a sandwich that I got from Erewhon and went to bed. Nothing exciting, really!

Today I had some meetings with people I'd like to work with on some upcoming projects. They went really well, and I'm excited about all the opportunities that are coming to me, so stay tuned!

Then I went to practice. Learning the salsa is going pretty well, although my ribs are still kind of hurting. It wasn't during a trick, but after a trick, I started getting these really sharp pains. We ended up stopping practice because I couldn't walk and went to urgent care. Thankfully, my ribs aren't broken, but the muscles underneath them have tears in them and are all fudged up. I got a steroid pack and a shot of some sort and it helped, and we went back to practice because we had to. We just learned the steps but didn't do much so I could take it easy.

Then I went home and went to bed really early, because I was in pain.

I have a few different interview segments today, which meant I had to wake up at 5:30 this morning to start in hair and makeup. It was rough, especially when I have no coffee. A travesty!

First up was an interview with Ryan Seacrest. I found out that we share a love of chicken livers, except that I like mine fried and he likes his the healthy way. Then I went to E! News, where I kind of gave them the inside look at my fitting for the People's Choice Awards. I didn't end up wearing any of the outfits they saw, but I did have my real fitting in one of the wardrobe rooms at E! News because my day is so packed that I don't even have time to do that somewhere else. I'm going to the CMAs next week, too, so I tried on dresses for that too.

My People's Choice Awards dress is really sassy and sexy and fun, so I'm feeling confident about that outfit:

Then I met Alan at Access Daily, where we did an interview with Mario Lopez. Then we went from there straight to practice. Right now, because my ribs hurt, we're not doing the tricks. We still have them in the dance, but we're not practicing them at the moment, so that's hard, because I like to practice everything as much as possible.

I'm getting frustrated because I'm in a lot of pain, but also know I need to do the dance as well as possible. I think Alan feels for me, but he has to do his job and we have to be our best, so we're working through it. After practice Alan and I went and got Tender Greens and just chilled for a little bit, and then I went to physical therapy for two hours. My ribs are really swollen and hurt pretty badly, but at least I got some exercises to help with that.

Alan and I have gotten a lot better at communicating, but we still sometimes get in these little tiffs. Today we had one and Alan told me to leave, so I just left. But then I forgot I had a mic pack on so he caught up to me and apologized. So then we went back and danced, and I danced the dance really bomb.

This is a very high pressure environment that I'm in. It's hard because I know we can do so great, but when I don't get things and I'm being silly and Alan is stressed, or when I'm stressed and Alan's being silly, we take it out on each other. I guess that's our partnership, but we always end up being OK. At least we ended up feeling really good about the dance.

Practice again! This time is a bigger practice, because we have camera blocking on Sunday. I just have to suck it up today. I'm basically in so much pain that I'm at the point of tears. The guys came in that are in my salsa dance and I tried to really perform it for them, but I'm hurting so so badly. Rib pain is some of the worst pain, and I'm really struggling and am scared about this week.

I tried on my outfits, and they're good, but one is really small and I don't know how it's going to stay on. It's time to bring my A-game, and it is hard to do that when it hurts to move side to side and even walk. But I'll figure it out.

Today is a big day. I have practice early in the morning, and I'm really hurting. It's been hard to sleep, but I got up and we did a few passes of each dance. I went all out with the salsa just to make sure I could hit the tricks, since we haven't really done them earlier this week. I think we're gonna be OK.

The tango went great, and we have a doctor on site who looked at my ribs and was able to give me some shots of steroids for the pain. We also learned the opening number and it's very Beyoncé, which was really fun. This is the first time the stars are dancing in the opening number, and I'm excited. But I have to leave straight from practice to get ready for the People's Choice Awards!

It was very crazy trying to get ready, but I did get to the carpet in time. I freaking hung out with Jimmy Fallon and met Pink! I even hung out with Adam Sandler and tried to find a way for him to introduce me to Jennifer Aniston, but sadly he didn't.

At the show, I'm sitting with all my ex-boyfriends, so that was really cool.... I joke. It was fine. More importantly, I can't believe that I won something at my first award show! How am I even at an award show? I'm sitting two tables away from the Kardashians and Zendaya is across from me (not at my table, of course). My life is so bizarre.

When I got on stage, I thought I'd just wing it and speak from the heart. It was a little scary, but really cool. I left soon after and went to bed.

I thought I set my alarm yesterday, but I didn't, so I woke up literally at the time my driver was here to pick me up. All I did was brush my teeth and wash my face and get in the car — thank goodness I had packed my stuff up before. Our show day rehearsal went pretty well.

My outfits were fine in the dress rehearsal, but during the show I had self-tanner on so my salsa dress wasn't sticking to my chest, and I was worried about a serious wardrobe malfunction. I don't think I performed the dance as best I could as a result, but it was still pretty good regardless of what the judges said. I've decided to just take their scores with a grain of salt. They obviously know what they're talking about, and I take every critique as an opportunity try to get better, but we just have to focus on Alan and I improving as a partnership each week.

The tango, though, was amazing. I was so excited to perform that dance, and Alan and I really performed it well together. I think we always know it's going to be a good dance when we kind of black out when we're dancing and don't have to think. We got three 10s and a 9 from Len. One day he's gonna give me that 10. It was a good night, and regardless of score I feel like we did a good job. We're so excited to be going to the semifinals!

Watch Hannah and Alan's salsa and tango below:

More like this
Hannah Ann Got Engaged 3 Years After 'The Bachelor' & The Proposal Was Dreamy
By Grace Wehniainen
Airris From 'MAFS' Says He Doesn’t Regret Going To Decision Day With Jasmine
By Brad Witter
Shaq Might've Spoiled His Relationship Status With Kirsten After 'MAFS'
By Brad Witter
RHOP’s Robyn Dixon Explained Why Juan Paid For Another Woman's Hotel Room
By Brad Witter
Get Even More From Bustle — Sign Up For The Newsletter
From hair trends to relationship advice, our daily newsletter has everything you need to sound like a person who’s on TikTok, even if you aren’t.