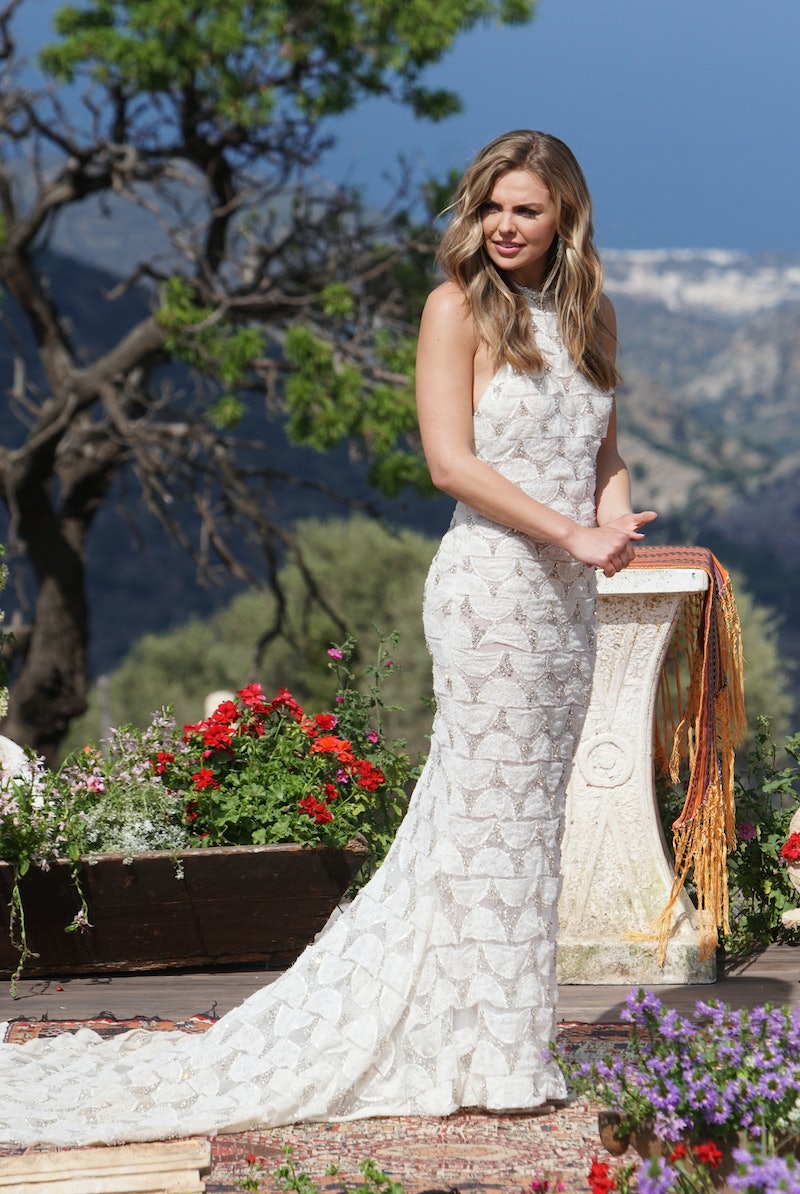 Hannah didn't get a hometown date on Colton's Bachelor season, so her Bachelorette finale marks the first time fans will get to meet her family. And while Hannah B. 's parents Sue and Robert are supportive of the Bachelorette star, they're also not afraid to get real with her. In fact, they've had a few negative opinions about her choices throughout the season.

For one, they loved Mike and didn't want to see him go home, according to Us Weekly. The outlet reported that a fan voiced disappointment over that choice on Hannah's Instagram, writing, "My grandma was crazy upset you sent Mike home," to which Hannah responded, "My parents were upset too." But they weren't just sad about one contestant going home, they also weren't thrilled about another guy who kept sticking around: Luke P.

Hannah was watching an episode live with her parents when she started tweeting about their reactions. "My parents are giving me the look you are all giving me right now," she tweeted. It was the episode in which she kept Luke over Garrett, and clearly Mama and Papa Brown weren't thrilled. Later Hannah also tweeted, "When mom starts off with 'I don’t want to make you feel bad but…' it’s not good."

Speaking of Hannah's parents' thoughts about Luke P., her mom made it clear she didn't like Luke after hearing him say on The Men Tell All that he thought he'd had the final rose "in the bag." According to Us Weekly, her mom posted a now-deleted photo of Luke on Instagram and captioned it, "In the bag!!! You would not have made it pass me you are a Ass!!!" Hannah saw the post and quickly wrote, "Mother. Delete. And never use social media again. I love you though (and you're right)."

But whether or not they agreed with all of Hannah's decisions on the show, Hannah's parents have her back. In a promo for the family portion of the finale, Hannah's dad told her he just didn't want her to settle, and Hannah's mom said she wanted Hannah to find the love she deserved.

The Browns have long been champions for their daughter, all the way back to her early pageant days. Here they are in 2012, standing by Hannah who was newly crowned Miss Tuscaloosa.

Her mom also came to support her even in the cold weather when Hannah appeared at the Homecoming Parade later that year for her pageant work. And both her parents showed up when she had a pageant press party at the mall in 2014. In 2015, her mom also attended the Miss Alabama Gala with Hannah.

In 2018, Hannah's dad told the Tuscaloosa News that he was always proud of Hannah for following her dreams in the pageant world. "She's just so comfortable in her own skin," he said. "We're just so proud of her."

Hannah told Tyler during a one-on-one date that her parents have also served as a road map for her in knowing what she wants (and doesn't want) out of a relationship.

Hannah loves her parents, and they clearly love and support her as well. So as long as Hannah picks a partner who does communicate and who in't Luke P. (thankfully that ship has sailed), she should have her parents' support going forward. Of course, that all depends on what they think of Hannah's remaining men during the finale. Fortunately, as Hannah's Twitter comments about them show, they're willing to speak up if they think she's making a mistake. That should make for both good TV for fans and perhaps also a better choice for Hannah in the end.

More like this
Rachel & Aven’s Fight In ‘The Bachelorette’ Finale Has Fans On Team Aven
By Grace Wehniainen
All The Clues About Gabby & Erich's Relationship After 'The Bachelorette' Finale
By Kadin Burnett
Here's The Full List Of Zach's Confirmed & Potential 'Bachelor' Contestants
By Kadin Burnett and Grace Wehniainen
Clayton & Susie Broke Up, Citing "A Significant Amount Of Pain" After 'The Bachelor'
By Jordyn Tilchen
Get Even More From Bustle — Sign Up For The Newsletter