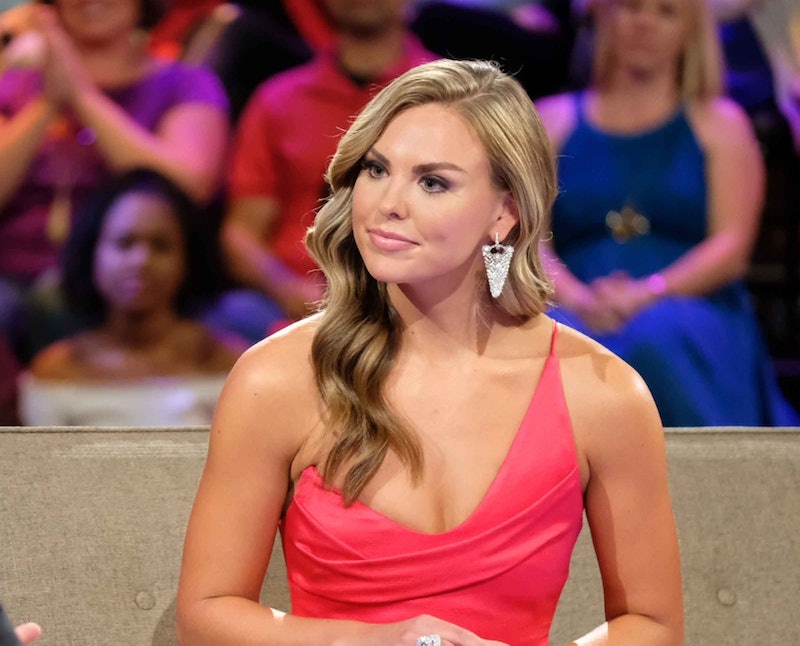 Hannah Brown's engagement to Jed Wyatt on The Bachelorette was very short-lived. Hannah (and the rest of the country) found out about his girlfriend Haley Stevens. Hannah confronted him, and said goodbye during Part 2 of the finale. Recently, Hannah shared a message for Jed's ex Haley during an interview with People.

Hannah said, "I would tell Haley that I'm sorry this happened to her as well." The Bachelorette star added, "I'm sorry that she had that happen to her and she was heartbroken as well. So, I hope she knows her worth and knows what she deserves too." In regard to Jed, Hannah said, "I think Jed realizes that you have to be very careful about the words you choose to say to someone and the way that you play with somebody's feelings." Does he really though? Let's hope so.

As sad as the split has been, Hannah believes that everything happens for a reason. She theorized, "I do feel like this was in my plan. Even though I sometimes don't understand why I had to go through some of the pain that I had been through the past few months, I learned a lot."

In that same interview, Hannah confessed, "It's hard for anybody to end what you thought was going to be forever, but I learned so much about who I am and what I define as love."

Now, Hannah has a whole new lease on life. She declared, "I love myself and know my worth. It was a huge moment for me to be able to step away from that relationship and know my strength from that."

As tough as the experience was, Hannah concluded, "I think it was supposed to be this way."

Now that Hannah is addressing questions about Haley, Haley is speaking out again to address the situation. In a July 31 interview with People, she claimed that she has "thought about Hannah every single day" after "letting" her then-boyfriend Jed go on the show to deceive Hannah with hopes to advance his music career.

She continued, "I’ve had the opportunity to take ownership for what I did wrong. I should have had a higher standard for the things I wanted. And if I had known this would go so far, I would have said, this is unacceptable. This was supposed to be Hannah’s love story."

Even though Haley was initially in on the plan, she still said, "I don’t know if there is anyone in the country who can sympathize with her like I can." Haley shared, "I know how it feels to be blindsided. And I will never be in that situation again." What situation? Will she just not date another aspiring singer who wants to deceive another woman on reality TV?

It's great that Haley has taken ownership over her role in this whole thing, but she was a part of it for some time. As for Jed, he fumbled during his talk with Hannah during Part 2 of the finale. Outside of the show, Jed has stayed quite on the topic, for the most part. On July 8, Jed told his Instagram followers that he will say more when the season ends.

Hannah has spoken. Haley has spoken. Now social media users have their eyes peeled waiting to see what Jed shares next or if he does a post-show interview. Let's just hope he doesn't whip out his guitar and sing his side of the story. No thank you, Mr. Wrong... girl.