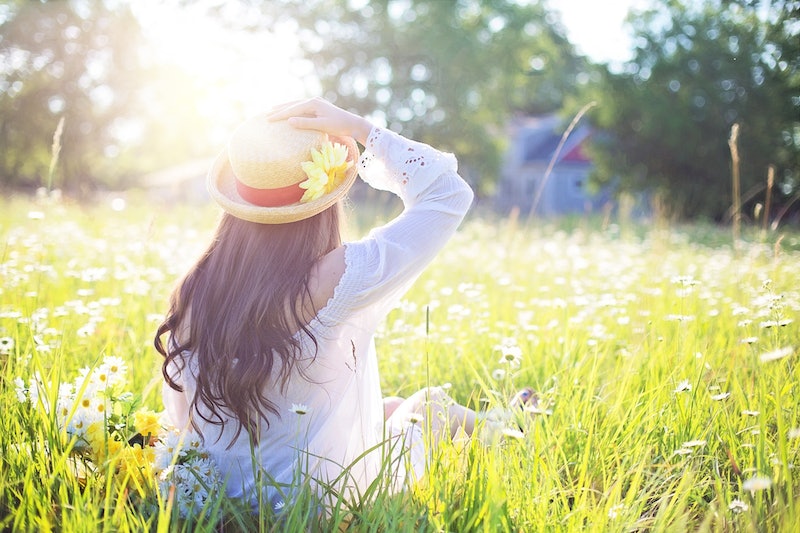 When you're having a bad day — the kind that begins with spilled coffee, ends in spilled Merlot, and somewhere in between random dudes keep telling you to smile — the last thing you want to hear is to focus on the bright side. It may not accomplish much, but nothing is as satisfying as a good wallow on your couch. If you actually want to feel better, though, remembering happy memories are a better coping mechanism than venting about everything wrong with your life.

In a paper published in Nature Human Behavior in April, researchers conducted two studies looking at the physiological and psychological effects of remembering happier days when you're stressed out. Naturally, this meant stressing people out, which researchers accomplished by sticking participants' hands in ice-cold water while recording their reactions. Afterward, some volunteers had to spend 14 seconds recalling happy memories, while the rest thought of neutral ones.

Here's the cool part: Overall, the happy-memory group was in a better mood than the neutral one after the experiment. This could even be seen on a physical level; the happy group's cortisol levels rose to just 15 percent (on average) of the spike in the neutral group, even though they were exposed to the same stressful situation.

In the second study, researchers repeated their method of inducing stress, but this time, they scanned participants' brains during the reminiscing phase. According to the fMRI data, people focusing on a positive memory showed more activity in parts of the brain associated with "reward processing and emotion regulation." As the BPS Research Digest points out, activity in these same areas are usually suppressed during stressful situations. As a result, researchers concluded that happy memories restrain your body's response to stress.

Fight or flight mode is important in survival situations, but it's not quite so useful when you're stressed about modern problems, like paying for college or finding a job. Research indicates that when your body is constantly on high alert, it can have serious consequences for your physical and mental health. A 2014 study suggested that chronic stress is associated with mental illness later in life, and the Mayo Clinic warns that high cortisol levels can increase your risk for problems like weight gain or heart disease.

On the other hand, studies have also found a link between optimism and longevity and general wellbeing. To be fair, negative thoughts aren't always a bad thing — ups and downs are part of being human. But if you've noticed your inner voice sounds like Eeyore, maybe start looking on the bright side. It looks like it's a cliché for a reason.

More like this
The 8 Best Crystals For Meditation, According To A Healing Energy Practitioner & Meditation Teacher
By Lauren Moison
Savannah Guthrie Got Her First-Ever Tattoo With This Former Wild Child
By Suzanne Zuckerman
11 Super Bowl Instagram Captions To Use On Game Day — Even If You Don’t Like Sports
By Alexis Morillo
February's Full Snow Moon Will Breeze Right By These 3 Zodiac Signs
By Brittany Beringer
Get Even More From Bustle — Sign Up For The Newsletter
From hair trends to relationship advice, our daily newsletter has everything you need to sound like a person who’s on TikTok, even if you aren’t.