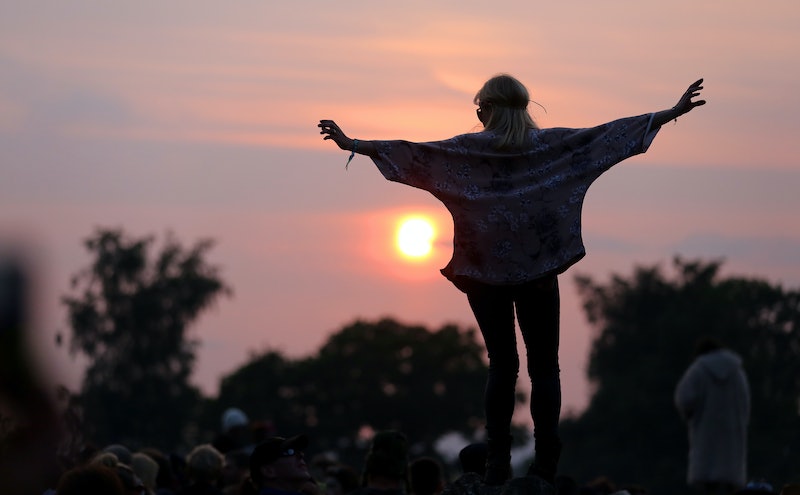 Music festivals should be fun, carefree, slightly hazy, sleep-deprived affairs. I think that's what most people are hoping for when they stuff their rucksack full to the brim with glitter, seriously short shorts, and cans of cider. But unfortunately that's not the reality for a lot of women, who are facing "shocking" levels of harassment at music festivals.

A YouGov survey released last week suggested that 43 percent of female attendees under 40 have been the victim of sexual harassment at a music festival. The poll of 1,118 festival-goers found that overall 22 percent had faced unwanted sexual behaviour, with the figure rising to 30 percent of all women asked.

But despite the high level of those encountering unwanted sexual behaviour, only two percent of the incidents were reported to the police. Meanwhile a far greater number of men (19 percent) felt able to report experiences of harassment to festival staff than women (one percent).

Unfortunately, the general advice and response to the under-reporting of sexual harassment and assault, is often just an instruction to report. Chief executive of the Association of Independent Festivals Paul Reed, did just that in his statement about the research.

Despite saying that festivals “have a duty to make their events as safe and secure and enjoyable” as possible, he went on to encourage festival-goers to report incidents if they witnessed them.

“If people don’t intervene, then this behaviour becomes normalised,” he said. “People shouldn’t feel that they need to tolerate [at festivals] the type of behaviour that they wouldn’t tolerate in the street.”

No, people shouldn't. But that doesn't exactly tackle the root of the issue. Plus, the data suggests that women do seem to endure more in those spaces than they would on the street. One wonders if female harassment victims feel they won't be taken seriously if they share what's happened to them.

Jen Calleja, a co-director of the Good Night Out Campaign, told The Telegraph that the findings were "shocking but not surprising", and added that the research "helps prove what we already know through anecdotal evidence. The idea we want to put forward is that harassment is everybody's problem, it's not just the person who is being assaulted."

Under-reporting is a symptom of sexual harassment, not the cause. So zeroing in on improving it is a distraction that excuses festivals from doing any heavy lifting when it comes to tackling the root of the issue. Organisers can and should make reporting easier, but they also need to focus on making their festivals safer and more respectful of women more generally.

That means ensuring sure all festival staff — including everyone from the team behind the bar, to car park wardens and on site security — are briefed on how to properly handle reports of harassment and assault. Also important are schemes like the Association of Independent Festival's Safe Spaces initiative. But women at festivals must be made aware of them, they can't just be a gimmick to put critics off the scent. The message needs to be loud and clear. That might look like zero tolerance messages on festival literature and screens on the side of stages, or it might look like festival goers having to sign an anti-harassment pledge before they can buy a ticket.

It also needs to start at the top. Can women really believe festival organisers value them when they're still left out of line-ups? In January, Wireless memorably released an early 2018 line-up with just three female acts included, and in 2017, only 26 percent of headliners were women or female groups, according to PRS Foundation CEO Vanessa Reed and as reported by the BBC.

Earlier this year 45 festivals acknowledged the problem and vowed to have 50/50 representation in their line-ups by 2020. But as NME's Helen Meriel Thomas asked in a piece on the issue, why do they need four years to find female musicians when it's something that could be googled in about four seconds? Women shouldn't have to wait four years for confirmation that they are just as deserving of the festival spotlight as men.

To be fair to festivals, they aren't the only ones at fault. When it comes to harassment, the government still isn't taking is seriously enough either, as this past week has proved. After she was the victim of "upskirting" at a music festival, Gina Martin started a campaign to have the intrusive act made a criminal offence. The bill that would have set the changes to the law in motion was supported by the government and looked to be heading straight through parliament, that was until a couple of male Conservative MPs decided to block its progress on a point of parliamentary principle, despite reportedly "agreeing" with the contents of the bill. There aren't enough sighs in the world.

So festivals need to do more, that much is clear. Here's hoping that during this summer (or next at a push — I'm not waiting till 2020) they can put the government to shame by taking harassment seriously.