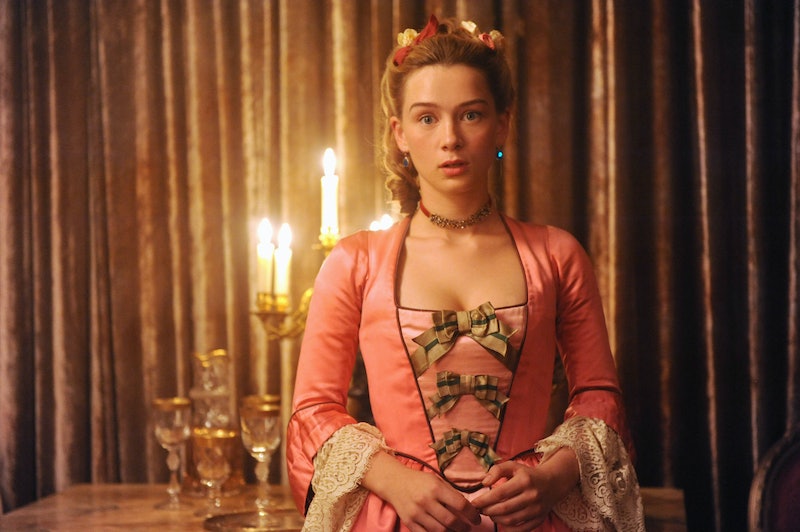 Hulu's new series Harlots may teach audiences, especially American audiences, a lot of things about Georgian England that we may not know or remember from history class. That said, the show certainly doesn't feel like any other period drama in kind of the best way. In an interview with Bustle, co-creator Moira Buffini explains what makes Harlots a contemporary series, and a compelling one at that.

"First and foremost," says Buffini, "we wanted to write a drama about the sex industry." The action drew her to this story and this world as well. "It's like an adventure story for girls," she laughs, "but with whores." Setting the story in the past has allowed them to develop this world, and find bridges to modern themes.

"This particular story is set in 1763, but it's about things that are still happening to women now."

Did you know that women in the 18th century used contraception? Did you know that syphilis was called the "French pox" back then? I barely got sex education at all in school, and there was certainly no history component.

"This is a story that never changes," Buffini says. "This is a story about the oldest profession. It never changes. This particular story is set in 1763, but it's about things that are still happening to women now. It's about the dangers of having no economic freedom whatsoever. It's about a really brutal economy, and there are some cities in the world where women still have the narrow choices that the women in our drama had in 1763."

"That's what our women are. They're outlaws."

When Buffini and Alison Newman, her writing partner and co-creator, went into the writers room to develop the show, they didn't use other costume dramas as a guide at all. "We took in The Wire," Buffini remembers, "and The Sopranos, and Breaking Bad, and other dramas that are about contemporary society, and about crime and outlaws in contemporary society. We thought that's what our women are. They're outlaws."

That's one of the reasons that the show uses modern music, which Buffini compares to the divisive condiment Marmite. Either you love the choice or hate it, but it's an essential part of the fabric of the show. "The word 'punk' is a Shakespearean word," she reminds us. "It's a really old English word [and] it describes a certain kind of disreputable person." The first recorded use of the word is in All's Well That Ends Well, in which the phrase "taffety punk" actually refers to a sex worker.

There is some music in the series that's accurate to the time, which is often sung by a character in the episode and then covered at the end by a modern band. "We thought musically rather than going for the Bach and Handel finesse," Buffini says, "we'd go for the much more earthy raw kind of music of the time and then make it a bridge into modern times. But we wanted it to have that energy, that wild energy..."

Harlots definitely has a wild energy, with humor and surprises around every corner. Its contemporary feel makes it not only an important feminist series, but an entertaining one as well.