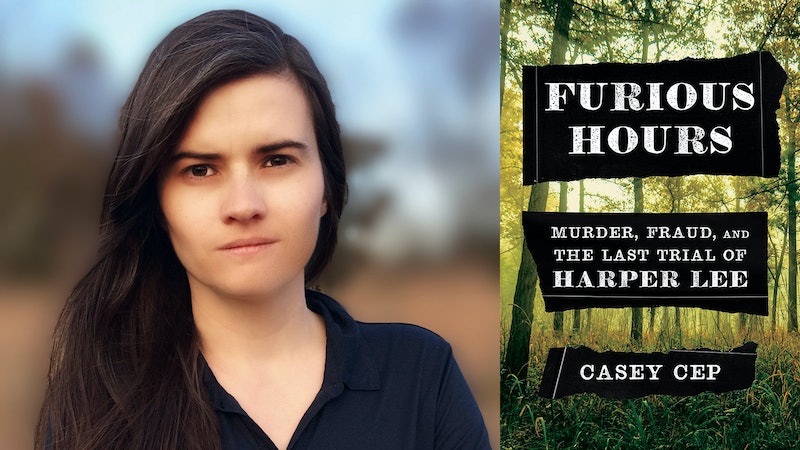 On a hot Saturday in June 1977, Reverend Willie Maxwell was killed at the funeral of his 16-year-old stepdaughter, Shirley Ann Ellington. Moments before being shot in the head, a woman in a pew nearby shouted at the Reverend, "You killed my sister and now you gonna pay for it!" Hundreds of people witnessed Ellington's uncle, Robert Lewis Burns, fire his gun at Maxwell, and yet he was found not-guilty of murder. Instead, Burns became something of a vigilante hero to local residents, who were thankful to be rid of Maxwell, a man five times accused of murdering his own family for the insurance money, and five times found innocent. It's a case that fascinated — and terrified — the town, and drew the attention of one of the most famous writers in the country, To Kill A Mockingbird author Harper Lee.

"In the way I think most people do when they hear about this case, it just felt kind of unbelievable," Casey Cep, the author of Furious Hours: Murder, Fraud, and the Last Trial of Harper Lee, tells Bustle. "A rural minister accused of killing five family members for the insurance money was gunned down at the funeral of his last victim? Maybe he was a practitioner of voodoo? It just doesn't quite feel real."

Cep's new book tells the story of the unbelievable true crime through the experiences of three key players: Willie Maxwell, the accused murderer and eventual murder victim; Tom Radney, the lawyer who successfully defended the Reverend and, later, the man who shot the Reverend; and celebrated author Harper Lee, who traveled to Alexander City to write a book about the case.

Cep first learned about the Maxwell case in 2015, when she traveled to Alabama to report on the publication of Harper Lee's Go Set a Watchman. That March, she wrote a piece in the New Yorker titled "Harper Lee's Abandoned True-Crime Novel." It detailed the murder of Reverend Willie Maxwell, the crimes he was accused and acquitted of before his death, and Lee's plans to write a true crime book about the case, tentatively titled The Reverend. After the article's publication, Cep heard from more people: Alexander City residents who met Lee when she was working on the story, shop owners whose stores were near the funeral home where Maxwell was murdered, and now adult children whose parents had some kind of investigative role in the case. It was then she realized she had more than enough material to write a book.

“I can’t remember the exact moment I thought, 'This is a book, and more importantly, this is a book I want to write,'" says Cep. "But definitely it seemed like the three main characters were the chance to write three very different versions of small town Southern lives, and three very different versions of how we make sense of the world. That is, religion, law, and literature, and I am interested in all three.”

"One way I talk about it is tracking down every noun in the book."

In writing Furious Hours, Cep conducted intensive research. She spent hours and hours looking up marriage and death certificates, newspaper articles, local and state archives, and other documents relating to the Maxwell case. “One way I talk about it is tracking down every noun in the book," Cep says. "When someone says, well Reverend Maxwell was also a pulpwooder, you write down the world pulpwood and read everything you can about the temper industry in Alabama. You realize the story involves insurance fraud, and you say, 'Okay I have to figure out how life insurance works, and how it is someone could manipulate that system.'"

Cep also traveled to Alexander City and Monroeville, Lee's Alabama hometown, and interviewed anyone who would talk to her about the Reverend, the case, or Lee's reporting on it. Unfortunately, some of the most important sources — Maxwell, Radney, and Lee — died before Cep ever became interested in the story, but there were many others who were willing to talk.

"...hopefully the experience for a lot of people is realizing how brilliant and cosmopolitan and ambitious Lee was."

"I think this is a story that was experienced very differently by very different people, and it is important to note that not everyone did cooperate," Cep says. "For those who did, I think it is pretty exciting, because there is this incongruity of the story of the Maxwell case. People who loved Harper Lee, kind of the general public, didn’t know about her work in Alex City, but the people in Alex City really did know how seriously she worked on this book, and they’ve been waiting for it for a very long time. In particular, people who knew Harper Lee who have lived to some extent like she did with the underestimation of her intellect and her abilities as a writer and the kind of tragic story of her life post-Mockingbird — I think some of those people are excited, too, because hopefully the experience for a lot of people is realizing how brilliant and cosmopolitan and ambitious Lee was."

It is easy to dismiss Lee as the author of a classic novel who was unable to reproduce the success of her debut. But to those who knew her, Lee was a brilliant writer, an intrepid reporter, and a fierce intellect. She held strong opinions about Southern politics and the country's race relations, but she was also firm in her beliefs about writing, literature, and the truth — beliefs that veered wildly away from those of her friend and true crime author, Truman Capote.

"I was happy in the book to get to use Harper Lee’s opinions as a way to talk about the true crime genre, and to think more carefully and structurally and historically about it," Cep says. "We have this three hundred year history in the Americas, but there are the Greek trials and the Gospel. Crime has always been a part of culture, and therefore always a part of writing."

It's when writers wade into the waters of true crime that things start to get tricky, according to Cep. The most famous example is, of course, In Cold Blood, a book that took its inspiration from a true crime, but that also took a lot of liberties with the truth. At least, that is what Lee, who helped Capote write the book, thought. Capote always denied his novel was anything but factual material written with the same techniques of a novel.

"I think what has happened since then is that boundaries continue to be porous," says Cep. "Capote really did disrupt it, but in the years since then, it’s just been a little more porous a boundary between what is true and what is not and how subjectively you can tell a story or how objectively we can interpret the truth of what happened. There are people like Harper Lee who find some of what's presented today as true crime to be transgressive, and to violate the boundaries between fact and fiction or speculation and subjectivity. I think that it’s tricky because people are meeting the needs of different audiences and holding themselves to different standards."

"The deep and most abiding question at the heart of the Maxwell case is the interaction between vigilantism and justice."

Lee, it seemed, always held herself to the highest journalistic standards, which is why she spent a year reporting the Maxwell case. The story, at its center, is one about race, class, and Southern politics. “I think the things that interested Lee in the Maxwell case are part of what makes it so relevant today," says Cep. "This case has very complicated racial and social elements to it, and the issues around policing and the ability of the criminal justice system to protect all vulnerable people in every community is again something we are still struggling with today. I think the aspects of the original investigations and the criminal trials are completely relevant.”

But questions of racial and social justice aren't the only ones Lee, and for that matter Cep, is interested in. "The deep and most abiding question at the heart of the Maxwell case is the interaction between vigilantism and justice," says Cep. "That’s where it is very clear to me the echoes that the Maxwell case has with Mockingbird. I think a forgotten part of the novel is the decisions Sheriff Tate and Atticus Finch make about Boo Radley and what he has done to Bob Ewell. It seems to me that interest in the absolute confusion of safety and justice and our muddled moral intuitions about how people should be held responsible for their crimes, or how we decide who is a menace to society and who is a hero, those are the things that brought her to the Maxwell case."

At the heart of Furious Hours is the story of Lee's contentious relationship with fame post-Mockingbird, and the struggles she faced for the rest of her career as a writer weighed down by her own success and legacy. It is as much a book about the crime that brought Lee to town as it is a book about the intensive reporting the author did while she was there, and what she was never able to do with it once she left.

Lee spent years reporting and writing her own true crime version of the story, but unlike Capote's In Cold Blood, it never became a classic. It was never even published. Depending on who you ask, Lee may never have written it at all.

"I woke up some days convinced I would get the phone call that it was getting published tomorrow.

One woman in Tuscaloosa told Cep she was sure the book existed, and her father had seen it with his own eyes. Another friend of the author said Lee's ongoing battle with depression and her fondness for alcohol prevented the author from finishing much of the book at all. One couple said the manuscript did exist, but Lee burned all 300 pages of it.

"The wild changeability of who is right, who has more information, whose opinion is more than opinion. It’s just, 'Oh my gosh!'" says Cep. "I woke up some days convinced I would get the phone call that it was getting published tomorrow. Then, some days, I woke up thinking, 'Lee really couldn’t get it together and it’s just a few pages of prose that's not very good or not even connected to an outline or plan for a book.' So what do I think today? If you called me yesterday or if you called me tomorrow, I think I would say something different. But the quote is this: Nobody will be more excited to read it than Casey Cep, and I hope it does exist.”