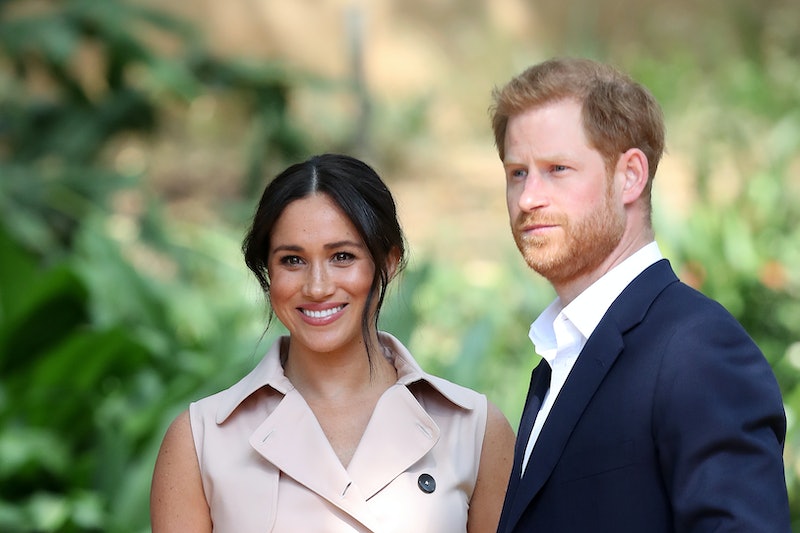 The latest royal news may come as a disappointment to any fans hoping to create a Sussex Royal slogan t-shirt. Recently published documents from the Intellectual Property Office (IPO) show that Prince Harry and Meghan Markle have filed trademarks for two specific terms: Sussex Royal and Sussex Royal The Foundation of the Duke and Duchess of Sussex.

Officially filed on June 21, 2019, both trademarks remain in application stage. If they become fully registered, it will be illegal for anyone else to brand items such as calendars, notebooks, shoes, and pyjamas (the full list features more than 100 items, according to the Daily Mail) with either term. Unsurprisingly, the Duke and Duchess have also applied to trademark their name for charitable endeavours including campaigning, fundraising, education, and social care services such as counselling.

This doesn't mean that Harry and Meghan are preparing to launch a clothing line or branded diaries and notebooks. It's simply a way of ensuring they control any item that bears the name of their foundation. And they're not the only royals to do it. Princess Anne has a trademark for The Princess Royal Trust for Carers and Prince Charles has one for The Prince's Trust and several of its offshoot organisations and events. The Queen actually has a trademark on her titles, Queen Elizabeth and Queen Elizabeth II.

A few days after Harry and Meghan filed, Prince William, Duke of Cambridge and Kate, Duchess of Cambridge applied for their very own trademark.

Unlike his brother, William's trademark for The Royal Foundation of the Duke and Duchess of Cambridge has been registered. It's not quite as expansive as the Sussexes', though. William and Kate's covers clothing, footwear, and headgear along with charitable fundraising, campaigning educational activities, and publishing.

It's not a surprising move from both royal couples. In June 2019, per Sky News, Harry and Meghan announced they were leaving the joint charity they had helmed with William and Kate. The Royal Foundation, reports Town & Country, was founded in 2009 by the two brothers. It has now been renamed The Royal Foundation of the Duke and Duchess of Cambridge while Harry and Meghan's soon-to-be-launched foundation bears the name Sussex Royal.

Time will tell which causes the Duke and Duchess of Sussex will lend their efforts to.