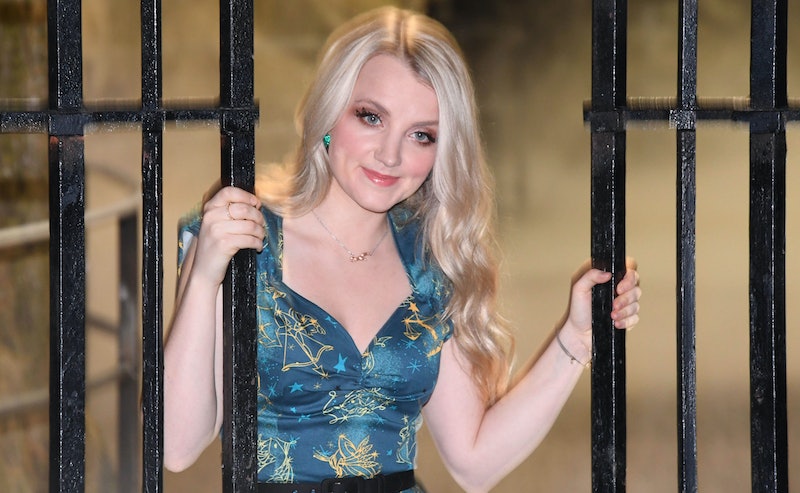 If one thing's clear, it's that the world is still obsessed with Harry Potter. But it's not just the films and books that everyone can't get enough of. It's the lives of the actors and actresses too. Obviously, Daniel Radcliffe, Rupert Grint, and Emma Watson get the lion's share of the attention, but the likes of Harry Potter star Evanna Lynch (aka Luna Lovegood) have a huge fanbase too. And personally, I'm glad to see she's using her platform for the greater good — in case you didn't know, she's actually in the process of launching a cruelty-free beauty box. What a legend.

Lynch unveiled her latest venture via Instagram on Friday with a short video, in which she revealed that the beauty box will be available later this year. Although specific details are yet to be announced, she did reveal that the project will be a collaboration with an unknown brand or individual. Oh, and she needs your help to do it.

She explained in the clip: "Basically, as most of you know by now, I am very passionate about animals and I also love make-up, and I do not believe that the two should intersect. I don't think that you should need to use animals for make-up. However, that is the way the industry is at the moment so that is something we're trying to change."

Lynch is now asking every person interested to fill out a quick survey detailing what kind of products they would like to see in the box; whether they would like full-sized or sample items, and how much money they would be willing to spend on it.

As for the profits of this business venture? While it would have been easy for Lynch to cash in, she is planning to donate a percentage of the proceeds from each box to animal rights charities.

Of course, this isn't the first time Lynch has fought for veganism. On social media, she is renowned for educating others about the highs and lows of a fully vegan lifestyle, and standing up for the rights of animals. A pretty similar life to her Harry Potter character, wouldn't you agree?

As previously mentioned, Lynch has been pretty quiet on the acting front lately. However, she has been busy hosting a podcast called The Chickpeeps which sets out to "explore, discuss, and unpick the dilemmas faced by vegans in our quest to be more compassionate towards animals."

In April, she also starred in an eye-opening PETA video which documented the horrors faced by animals that are tested on by the beauty industry. In the "make-up tutorial video with a bit of a twist", Lynch explains how cruelty-free make-up is still sometimes tested on animals She then faces the same tests that PETA reports animals living in a lab undergo, including having skin-burning chemicals smeared on her face and in her eyes and being force-fed a sludge-like substance. (Note: This experiment is obviously fake but highlights how living creatures are being used by cosmetics brands.)

But back to Lynch's beauty box proposal. The beauty box industry has exploded in recent years. A survey carried out by McKinsey found that the subscription market has grown by over 100 percent every year for the past five years with big companies making almost £2 billion in sales in 2016.

While there are a few cruelty-free options available, Lynch's curated box is set to be the most high-profile. In the past, she has expressed a desire for natural beauty. "I love beauty and I love celebrating the aesthetic side of things, but I just hate when girls reduce themselves to that, when they define their worth by how they look," she told Plant Based News, adding: "[Beauty is] not the most important thing. You are so much more than your face and your looks."

So expect to see plenty of natural products that aim to enhance your face, rather than change your appearance entirely. And if you'd like to have your say on what goes in each beauty box, don't forget to give Lynch your unbridled opinion.