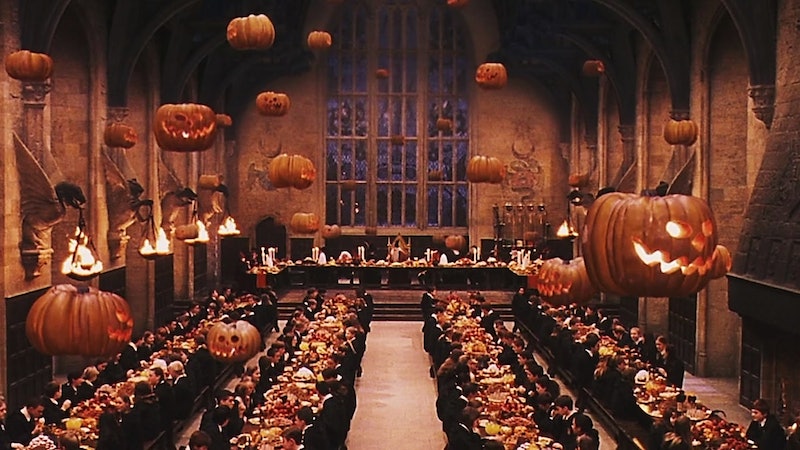 Something is brewing. No, not rain and smog. Hell no. Well, yes rain and smog, but also you guys: magic. Halloween feels like a long time away, but the annual spooktacular is actually only around the corner. And for serious Halloween fans, planning is absolutely key when it comes to costume choice, yes, but also when it comes to the sort of soirées worth attending. Those who love all things magical should get polishing their wands because Harry Potter fans can spend Halloween 2019 at Hogwarts.

Shut the front door with a spell because this is actually happening, you guys. The team over at Warner Bros Studios in Watford have taken things to the next level for this year's witching season. Sounds like good old fashioned family fun, right? Well guys, leave the kids at home for this one because it's 18 and over only and it's about to be seriously lit. Or should I say seriously lumos.

The events will be held over three nights in October — the 24, 25, and 26. And when you hear about all of the magical and wonderful events going on you will understand the £240 price tag. I know it sounds hefty, but just bare with, it's totally worth it.

So the night kicks off at 7p.m. when you'll be greeted with a big old red carpet and some tasty AF canapés. You'll stroll through into the Great Hall which will be totally decked out for the Halloween spooktacular.

According to a statement on the Warner Bros studio tour website: "The Great Hall will be decorated with over 100 floating pumpkins, as seen on screen in Harry Potter and the Philosopher's Stone while the long tables will be laden with a Halloween feast of red apples, pumpkins and cauldrons of lollipops."

So you'll mooch into a hall adorned with all of the sweets and decorations and feel 100 percent like you're actually a Hogwarts student. Or should I say alum, because I don't think students are old enough to get quite as lit as this is. Once you've sat down you'll be able to snarf a two course meal with drinks, surrounded not only by the amazing sets but also by actual death eaters doing the rounds wearing costumes that featured in the damn film.

After all the food and sweets, you better still have room for pud. Arachnophobic people look away right now, because the next part of the big event might just scare the living daylights out of you.

According to the website, next on the agenda is: "Grabbing a lantern and following the spiders into the Forbidden Forest where dessert will be served in the company of magical creatures such as Buckbeak the Hippogriff and Aragog the Acromantula."

After that, guests will be able to take a closer look at the studio tour. The lights will be slightly dimmer and the death eaters will still be on patrol, meaning the atmosphere will be decidedly foreboding.

Guests will also have a chance to talk to prop makers and learn all about the tricks of the trade. And to top it all off, there'll be an opportunity to learn how to engage in wand combat from actual wand choreographer, Paul Harris.

Yikes. This almost too magical to imagine. Luckily you don't have to imagine it as tickets are still available to buy via the website.

Go on and accio all the magic you deserve this Halloween.