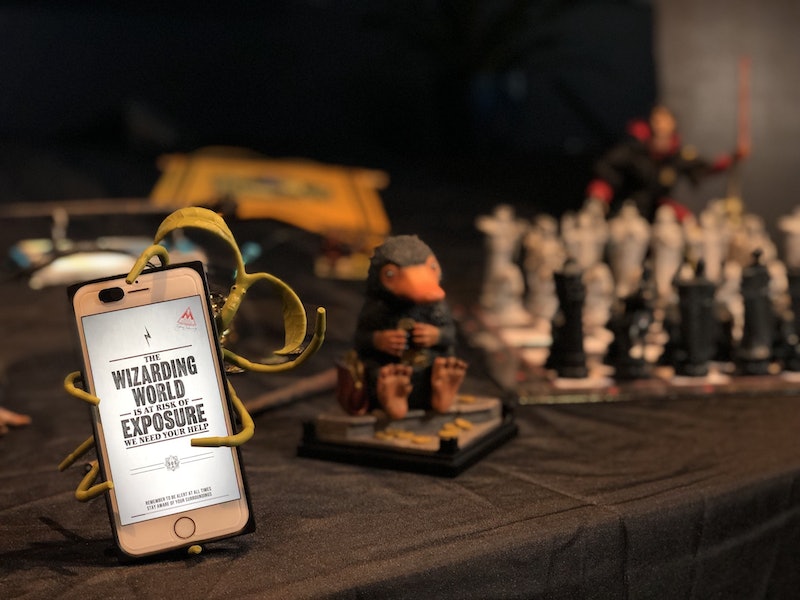 It may not seem that long ago, but it's been three years since Pokémon Go took over the world's phone screens. Mad, right? Well, hold onto your broomsticks because there's another AR-centric app on the horizon and this time it's *magic*. From one of the world's biggest franchises to another, Harry Potter: Wizards Unite is the next adventure Niantic have up their sleeves and is set to take over the lives of Potter fans across the globe.

For reasons unknown to the Ministry of Magic, "artefacts, beasts, people and even memories of the wizarding world" are popping up across the world, leaving the secretive lives of witches, wizards, and half-bloods in danger, as detailed by the Pottermore news team. As a member of the Ministry's Statute of Secrecy, it's your duty to "investigate and contain" the calamity by discovering the 'Foundables' around you, freeing them, and returning them to the wizarding world.

At the moment, only Potter fans in New Zealand and Australia have access to the Beta version of the app, which was made available in April and May respectively. As Niantic recently announced, the beta is set to be released tomorrow (June 21) for the UK and U.S., and will then be rolled out worldwide via a "regional roll-out" as WB Games executive producer Mary Casey told Eurogamer. The app is free to download, and while it will contain some micro-transactions they'll only speed up some of the processes of things like making potions.

As Wizards Unite is developed by Niantic (in collaboration with WB Games and Portkey Games), it's built upon the same foundations as Pokémon Go. But don't expect Pikachu to randomly pop up while you're out gathering ingredients or finding 'Foundables', as this game introduces a variety of new gameplay mechanics while also tweaking ones that Pokémon Go players will be familiar with. For instance, instead of PokéStops and Gyms, players of Wizards Unite will visit "[c]uisine-serving inns" to replenish energy and greenhouses that "provide energy for potion brewing," as TechRadar reports.

In terms of combat, instead of Pokémon battles, players can expect to be faced with a variety of foes protecting the 'Foundables' that have to be defeated to collect them. As the game is currently in its beta form, there's obviously room for additional features in the future, but for now, this is what players can expect when they open the app for the first time.

If you can't wait until tomorrow to discover what Wizards Unite has to offer, thankfully some players down under have uploaded snippets of gameplay. Gaming channel ZoëTwoDots has a very detailed video on what you can expect from the get-go, like the inclusion of some very familiar faces (and voices), and how the Pokémon catching mechanic has changed to spellcasting.

From her footage, it seems that the story featured in Wizards Unite is easy enough to follow, which was a major goal for WB games in development. "Harry Potter is a complex, interesting, wonderful franchise — and it means different things to different people, and those storylines are not all simple, they're not all straightforward or always clear," Casey explained to Eurogamer. She added: