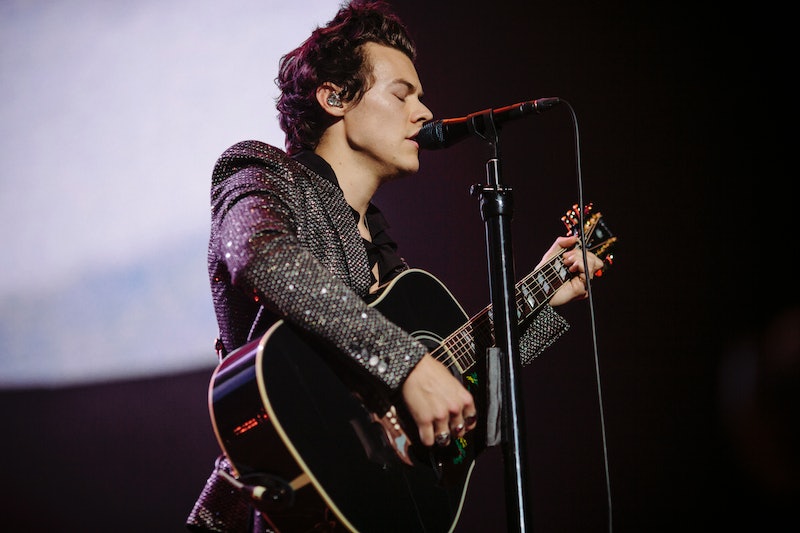 Harry Styles fans are willing to do the most to make sure they don't miss a beat of his career, including missing out on necessary doctor's appointments. But the One Direction alum is making one thing clear: his fans' mental health comes before his comeback. Which is why Harry Styles encouraged fans to go to therapy in a tweet on Thursday, Oct. 9, all while also teasing that new music is imminent.

There's a huge buzz in the air that Styles is about to return with his highly anticipated sophomore solo album at any moment now, thanks to an encouraging website (literally) and some mysterious "Do You Know Who You Are?" billboards that have popped up in a couple different locales. In the midst of excitement over these recent developments, Styles stan @harrysenigma joked that she should miss an important appointment in case anything else of note happened, writing on Twitter, "I guess therapy can wait... HS2 and tour can’t." (HS2, of course, meaning Harry Styles' second album.)

Styles himself happened to see the Tweet — a momentous feat given how he doesn't use social media that often – and responded to the fan directly, asking her not to miss out on therapy for him. "Go to therapy, it’s important. I’ll wait for you," he told her, ending his tweet with the #WorldMentalHealth hashtag, in honor of World Mental Health Day, which also falls on October 10.

Not only is this a great reminder for World Mental Health Day, it's also the closest to official confirmation fans have received from the singer that new music is arriving soon. Speculation started earlier this week when fans spotted billboards around London and New York that read "Do You Know Who You Are?" in stark capital letters, but the star himself had yet to confirm any involvement.

While the posters don't mention Styles by name, they feature the logo of his label, Columbia Records, and the acronym TPWK, which stands for Treat People With Kindness. It's a phrase Styles has used in the past, he even created merch with the motivational saying for his last tour, which is still currently being sold on his website. Additionally, on Saturday, Oct. 5, Styles tweeted the word "Do," making fans attempt to figure out what exactly it means.

The billboards led fans to discover doyouknowwhoyouare.com, a website which generates positive and encouraging messages for users — another useful tool on World Mental Health Day. When you type in a name, fans will get one of various responses, telling users they are "honest," "patient," "ambitious," and even "a bit needy but that's okay." Each message is signed with "Love, H" — his typical salutation often used on social media — and also bears the TPWK acronym, all but confirming that it has to do with Styles' upcoming era.

Immediately, fans started posting their responses online and spreading positive words to each other, making #DoYouKnowWhoYouAre one of the top trends on Twitter.

Some fans have also started to have a little too much fun with the site, creating memes and hilarious jokes, one even involving a hilarious quote from The Good Place.

Styles previously confirmed to Rolling Stone that his long-awaited second solo album was in the works, but given these signs, it may be coming sooner than fans initially thought. But regardless of when new music actually arrives, Styles has made it clear that as much as he wants fans to listen to his music, he wants them to make their mental health a priority first, and it's only going to make fans love him even more.