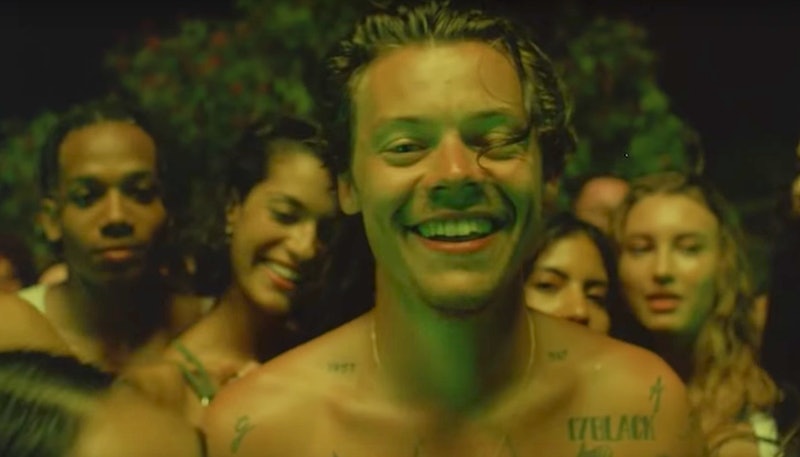 Unless you've been living under a rock you'll know that One Direction heartthrob Harry Styles has released a new song Lights Up. This is Styles' first single for a while and it's fair to say that the track was highly anticipated. Naturally, fans have been been thinking of all sorts of theories when it comes to the meaning behind the track. So, to clear things up, Harry Styles explained Lights Up during an interview with Capital, and now we can put our minds at rest.

Styles was a guest on the Capital Breakfast Show with hosts Roman Kemp, Vick Hope and Sonny Jay, where he appeared on FaceTime wearing a fluffy lilac dressing gown. It was early in the morning, after all, and he admitted to the presenters that this wasn't a usual wake up time saying "I'm up very early indeed."

When asked about Lights Up and the inspiration behind it, the singer said:

"For me, the song is about freedom. It’s about self-reflection and self-discovery and just, like freedom. It feels like very free to me. A couple things that I’ve thought about and I guess wrestle with a little bit over the last couple years. It’s kind of like just accepting all of those things. It’s a very positive song to me."

Speaking to another station, Hits Radio, Styles said: "For me it’s a very uplifting song. And I think in places it’s kind of dark. It’s very liberating."

If you've seen the video for Lights Up and were wondering how he got so oiled up, Styles explained that during his Capital interview, too. "I think it was aloe vera actually, because I got a little sunburnt while I was there… it was a little more healing. So it wasn’t a clicky thing, I think it was just hot — I mean heat hot, not like ‘it was so hot’." We hear you, Harry.

Styles also teased the news of a potential tour in 2020, saying that one of the reasons he didn't take the role of Prince Eric in the upcoming Little Mermaid film was because they "shoot for so long." He continued "and I want to tour next year. Maybe. Don't know, that's potentially... Maybe not. Haven't announced that yet... But maybe."

So keep your eyes peeled, guys.