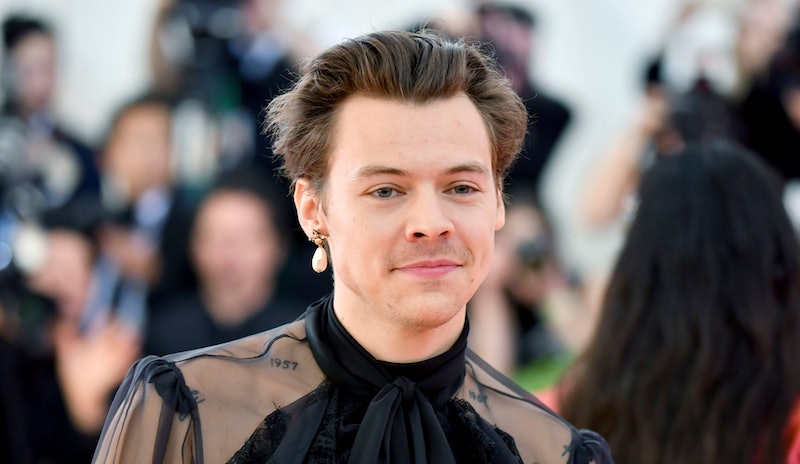 Charles Sykes/Invision/AP/Shutterstock
By Rebecca Fearn
May 7, 2019

The Met Gala always brings with it a series of bold, avant garde fashion choices, and this year was no different. The theme, which was 'Camp: Notes on Fashion,' inspired a whole range of outfits, from co-host Lady Gaga's four outfit changes to Kim Kardashian's wet-look hair and corset ensemble. But IMO the real winner of the night was Harry Styles, who rocked an all-over Gucci look, complete with a sheer black blouse, and finished with a single droplet earring. So let's discuss Harry Styles' pearl earring, and how to dupe it.

Speaking to Miss Vogue, Harry Lambert, who collaborated with Styles to create this look, explained that the outfit was perhaps a little unexpected:

"I think everyone was expecting Harry to be in sequins, bright colours and a crown, but we decided on a different type of 'camp' that hopefully would surprise," Lambert told the publication. He continued:

"After such a colourful tour wardrobe it is nice to do something a little unexpected. This look is about taking traditionally feminine elements like the frills, heeled boots, sheer fabric and the pearl earring, but then rephrasing them as masculine pieces set against the high-waisted tailored trousers and his tattoos. The look, I feel, is elegant. It's camp, but still Harry."

Vogue notes that the look uses references from the "New Romantic movement to the Victorian era, while sticking to the camp theme of the evening," summing up the ensemble pretty well.

And then there was the single pearl earring, a last-minute addition that resulted in Styles piercing his ears especially for the Gala.

“It was the perfect final touch for the outfit," explained Lambert.

"About four days ago, the day before I left to travel to New York, I was on Gucci’s website and saw these pearl earrings. Harry and I have discussed previously piercing his ears, and this was the perfect time. I text him and he replied, saying ‘Let’s do it.’”

As pretty as they are, most of us can't afford to drop £300 on a pair of earrings. Luckily for you, I've found some awesome pearly alternatives if you fancy pulling a Harry at your next boujee event (they also work for everyday wear, too!).

If you love a hoop, these are the perfect pearly design for you. I love the unique shape of the pearl detail.

I love the multiple pearls and cute double hoop vibe these have going on. A perfect alternative to a single statement dangling pearl.

I reckon these are most similar to Harry's Gucci style. Sold as a single, it's the ideal design to make a statement, a la Styles.

These gorgeous oversized hoops are totally worth the money, if you ask me. The baroque nature of the pearls makes them authentic and every pair unique.

Nail two summer trends at once with these pearl and shell earrings, which will look great on your beach holiday.