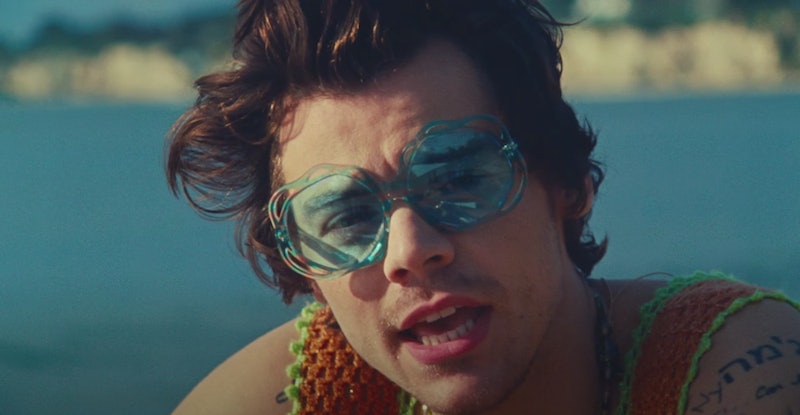 We might not be allowed to party on beaches or frolic by the pool this summer, but that doesn't mean 2020 won't have a song of the summer. On Monday, Harry Styles premiered the music video for "Watermelon Sugar," and it will make fans nostalgic for days pre-quarantine beach days — and also probably a little hot and bothered. Filmed before the COVID-19 pandemic, the sun-filled video shows the singer frolicking on the beach as part of a vibrant summer-love fantasy sequence.

Styles' music video premiere began with the message "This video is dedicated to touching - May 18, 2020." The dedication appeared to be a nod to our current socially-distant situations, as the video then proceeded to tease us lonely people with all kinds of physical affection, including kissing, hugging dancing, caressing, and sharing food. Much like the music video for "Lights Up," the video is a joyful tangle of people and touch, just on the beach and, of course, with plenty of watermelon.

Directors Bradley & Pablo captured plenty of sun-soaked shots for the song, filming the singer dining on watermelon in blue sunglasses that match the seaside backdrop. Then, Styles poses for an intimate snapshots with the group of models and the whole crew does some generally joyful splashing in the ocean.

Styles has been teasing the "Watermelon Sugar" video for the past week, keeping the fandom on their toes. They even had the song trending on Twitter for several days before the premiere. On Sunday, Styles posted a teaser for the music video, showing minute-long clip of a table set for one in front of an ocean. In the final seconds, Styles appears with a plated slice of watermelon, and sits down to dine. The music video picked up where that teaser left off, and, truly, the images of Styles getting ready to eat watermelon will live on forever in the hearts and minds — and dreams — of fans everywhere.

The music video did seem to confirm what fans have thought all along about the meaning of "Watermelon Sugar." In Nov. of 2019, Zane Lowe asked Styles about "Watermelon Sugar" during an interview, noting that listeners had come to the conclusion the song was about, "the joys of mutually appreciated oral pleasure." Styles would neither confirm nor deny that interpretation of the song's meaning, but did confirm that he wanted to the track to feel, "less guarded, a lot freer, more joyful, and honest."

More like this
Harry Styles Just Split His Pants In Jennifer Aniston’s Face
By Sam Ramsden
Cruz Beckham Teased New Music With An Adorable Nod To Mom Victoria Beckham
By Stephanie Topacio Long
"Lavender Haze" Star Laith Ashley Breaks Down Filming With Taylor Swift
By Jake Viswanath
Twitter Is In Awe Of Taylor Swift’s “Lavender Haze” Music Video
By Jake Viswanath
Get Even More From Bustle — Sign Up For The Newsletter
From hair trends to relationship advice, our daily newsletter has everything you need to sound like a person who’s on TikTok, even if you aren’t.