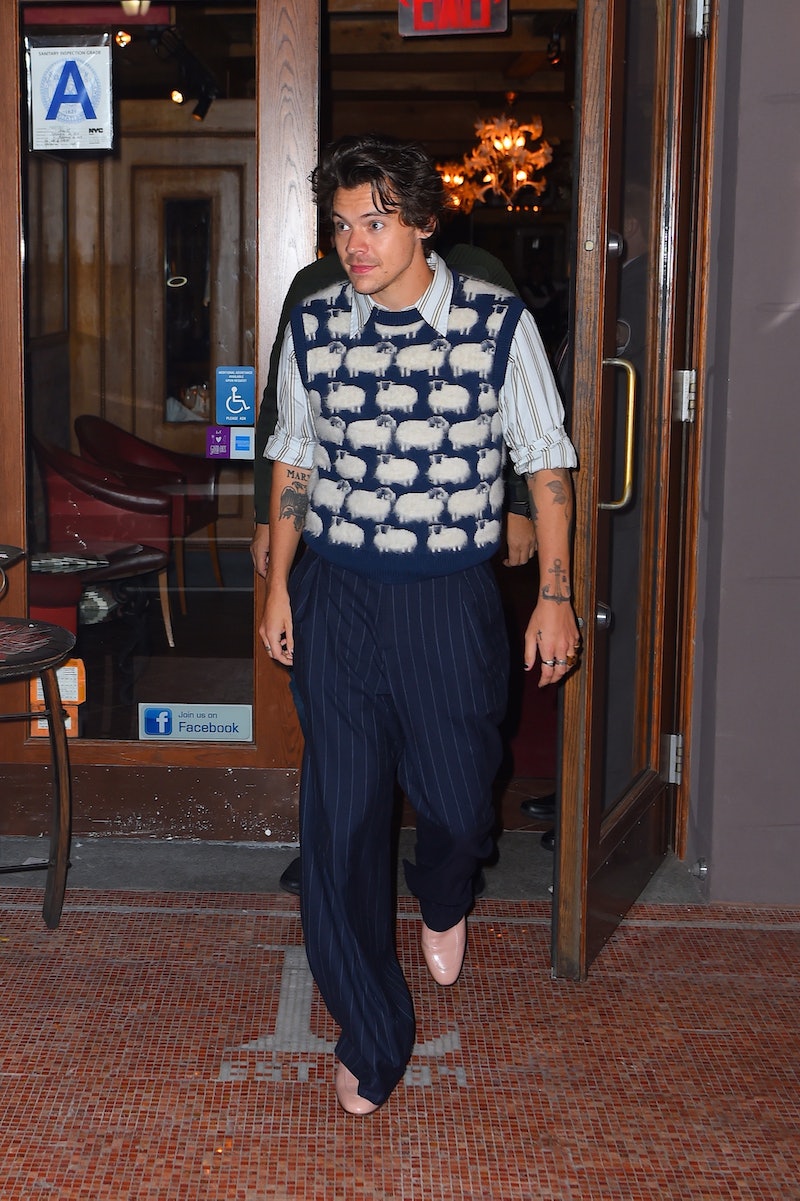 Meghan Markle and Kate Middleton channel their mother-in-law Princess Diana often, from wearing her jewelry to donning similar styles. But as it turns out, Harry Styles is also a style fan of the late princess. According to Harper's Bazaar, Harry Styles wore a sheep sweater when he stepped out in New York prior to hosting Saturday Night Live on Nov. 16. And surprise — that cozy sweater is a full-on Princess Diana style moment. The magazine credited Rachel Seville Tashjian for calling out the potential inspiration behind Styles' sweater, and the look definitely appears to be a twinning moment with the late royal.

The magazine reports that Princess Diana wore a long sleeved sweater with a similar design to a polo match in 1981. While Styles' look doesn't feature the subtle addition of a black sleep the way Princess Diana's jumper did, the two pieces are difficult to look at together and not see similarities. As for the mind behind Styles' sweater, Vogue reports that the piece is from Lanvin, and no, the label didn't also create Princess Diana's. According to an archived People piece, her black sheep sweater was by Sally Muir and Joanna Osborne.

According to People, Harry Styles fashion account, Harry Styles Fashion Lookbook, lists the singer's sweater as costing a cool $1,190. That's if you can even get your hands on it given that the piece is part of the label's Spring 2020 collection.

While Princess Diana's sweater is obviously no longer available, there is some good news for fans of her '80s look. Muir and Osbourne are still designing knitwear in London.

While it's been over 35 years since Princess Diana wore one of their pieces, Muir and Osbourne still offer animal-themed knits. Now, their focus just appears to be on dogs. The pair have an entire section of their site dedicated to dogs on sweaters, and yes, they are are cute as they sound. Plus, the pieces won't cost you near $1,200. The Muir and Osbourne dog sweaters retail for around $160-$192 depending on the style, and they do offer international shipping.

Harry Styles isn't the only Princess Diana style imitator outside the royal family. Back in Aug, Hailey Baldwin channeled Prince Diana's iconic athleisure style from the '90s donning oversized sweatshirts, baseball caps, and bike shorts for a spread in French Vogue. But she wasn't done there. According to Teen Vogue, Baldwin has continued to channel the late royal in her personal style as well. On Nov. 13, the same day Styles' sweater made headlines, Baldwin donned yet another Princess Diana-inspired athleisure look when she headed to the gym.

While Styles may be fashion star in his own right (he did host the Met Gala), Princess Diana's style is still clearly one of the most enviable.

More like this
5 Striking Parallels Between Princess Diana & Prince Harry’s TV Interviews
By Catharina Cheung
The Biggest Fashion Moments Of Paris Couture Week 2023
By Dominique Norman
10 Times Haley Lu Richardson Dressed Just Like Portia
By Dominique Norman
Twitter Memed Doja Cat's Red Schiaparelli Look & I Am Cackling
By Dominique Norman and Kelsey Stiegman
Get Even More From Bustle — Sign Up For The Newsletter
From hair trends to relationship advice, our daily newsletter has everything you need to sound like a person who’s on TikTok, even if you aren’t.