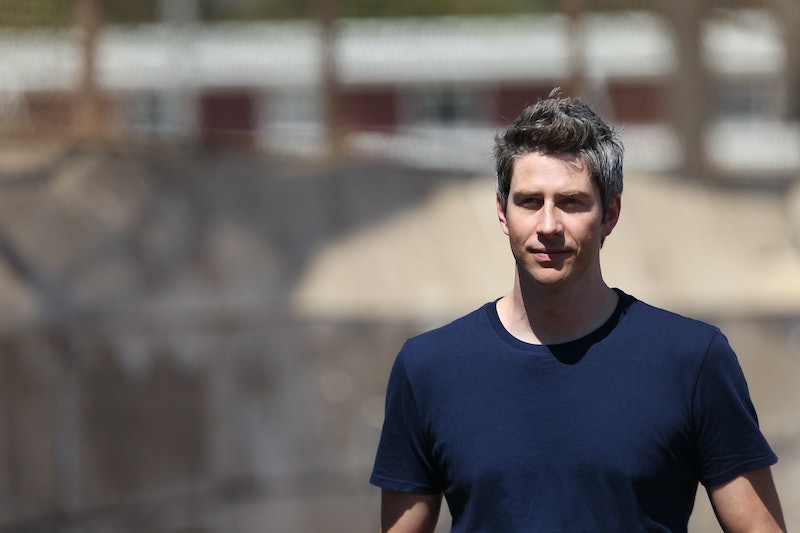 Arie's season isn't the first time that a Bachelor has told two women on the show that he loved them. Ben Higgins most famously created drama on his season by telling both JoJo and Lauren B. that he loved them before breaking JoJo's heart. And this season, another Lauren B. is competing for the love of a Bachelor, this time against Becca K. Arie told both Becca and Lauren that he loved them during Fantasy Suites, but Monday's finale will find him choosing between the two — after all, he can only get down on one knee for one woman. But, rumors abound that Arie will propose to one woman on the season finale, only to dump her later in exchange for the runner-up. If this is true, it's worth asking: Has a Bachelor ever changed his mind before?

The short answer? Yes. One incredibly famous, headline-grabbing time. In 2009, then-Bachelor Jason Mesnick gave viewers a fairytale ending when he proposed to Melissa Rycroft during the season finale, dumping his runner-up, Molly Malaney. But after the show wrapped, Jason began to have second thoughts. "Melissa is a great girl, but there wasn't any chemistry," Jason told Us Weekly after the show finished. "So I broke up with her after Christmas, about a month after we wrapped." And then, during an infamous After the Final Rose episode, Jason "broke up" with Melissa on live television (Jason shared in the Us Weekly interview that they had actually already separated before the segment was filmed) and asked runner-up Molly to take him back.

Jason told Us Weekly that he first began to realize he might have made the wrong choice when producers asked him whether he thought that Molly would make a good Bachelorette. Jason said in the interview, "I realized I was not willing to let Molly go on TV and have 25 guys fight over her." Molly agreed to give Jason a second chance during After The Finale Rose, despite the fact that she was initially rejected during the finale.

Though many viewers of the show were horrified by Jason's decisions, and even doubted whether Molly and Jason could last after the dramatic end of the season, the couple have proved everyone wrong. Jason and Molly recently celebrated their eight wedding anniversary, cementing themselves as one of The Bachelor's biggest success stories. According to E!, the couple's wedding, which was aired by ABC, marked the first time a Bachelor franchise wedding was televised, a tradition that has quickly become a quintessential part of Bachelor Nation. In 2013, Jason and Molly welcomed their first child together, a daughter named Riley. Jason already had a son Ty from a previous relationship. Together, the Mesnicks are truly a beautiful family.

Jason and Molly are an example of how, though the Bachelor might not always get it right the first time, the process really can work — even if the winner gets dumped for the runner-up. So there is a precedent for Arie's alleged last-minute switcheroo. Regardless of who he ends up with, there's a real chance that, like Jason and Molly, the couple could really make it last. “The finale is going to be very interesting for fans to watch. It’s been an experience I’ll remember forever," Arie told Us Weekly. "It’s going to be fun for me to watch back.”

But that doesn't mean that his actions won't be controversial, or extremely hurtful for whichever woman thought they were walking away with a fiancé, only to end their Bachelor journey heartbroken. Eliminated contestants are angry with Arie for his decisions, and haven't been shy about voicing their opinions in the press, and to Arie himself. “I know what you did and I don’t know how you could do that,” Caroline told Arie during the Women Tell All. “I just really don’t understand but I hope you found what you’re looking for.”

Bekah M. also voiced her disapproval of Arie's decision in an interview with ET. "I think [fans' reaction] just definitely depends on their perspective and what they think of the different women that he still has on the show right now," Bekah M. told ET after the Women Tell All taping. "I, myself, was a bit disappointed in Arie ... But in the end, you know, the heart wants what it wants, and I think he's justified to make whatever decision he's going to make for himself."

But Arie seems to have no regrets about his potentially controversial decision. “I think there’s criticism every season and I think that I handled that well,” he told Us Weekly. “At the end of the day, it’s all about finding that person for myself and being happy after all this. I really feel like I will be.” And if Jason and Molly prove anything, it's that sometimes, changing your mind can be for the best — in the world of The Bachelor, anyway.