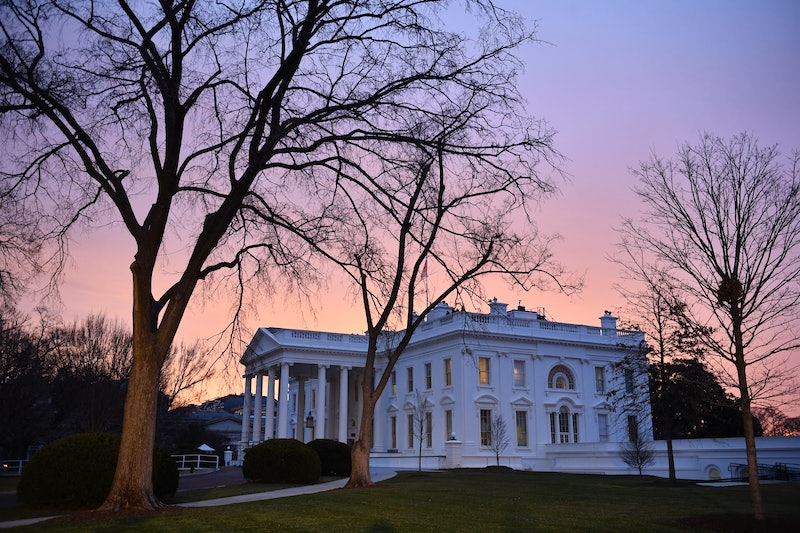 In an interview with Axios on Monday about whether President Trump knew Michael Flynn lied to the FBI when he was fired, Trump's personal lawyer, John Dowd, claimed that a president cannot obstruct justice because he is "the chief law enforcement official." Dowd's claims sparked surprise and outrage from some, as many experts argue that a president can indeed obstruct justice. In fact, former presidents have been charged with obstructing justice before — just look at Richard Nixon and Bill Clinton.

Obstruction of justice is the act of impeding an official investigation. It is a federal crime, though it can also be cited as a non-criminal charge brought by the U.S. House of Representatives to impeach a sitting president. Both Nixon and Clinton were charged with obstructing justice in their respective articles of impeachment.

According to POLITICO, in Nixon's case, the House Judiciary Committee filed impeachment charges against Nixon that alleged he "prevented, obstructed, and impeded the administration of justice" by "interfering or endeavoring to interfere with the conduct of investigations by the Department of Justice of the United States, the Federal Bureau of Investigation, the office of Watergate Special Prosecution Force, and Congressional Committees." Nixon resigned in August 1974, before he could be impeached or removed from office.

POLITICO also reported that, in Clinton's case, the 42nd president was actually impeached on an obstruction of justice charge, which alleged that he obstructed justice by engaging "in a course of conduct or scheme designed to delay, impede, cover up and conceal the existence of evidence and testimony related to a Federal civil rights action brought against him in a duly instituted judicial proceeding." Clinton was not convicted of the charge and thus was not removed from office.

The impeachment charges filed against both Nixon and Clinton demonstrate that a sitting U.S. president can indeed be charged with obstruction of justice — and that a precedent for impeachment related to this charge has already been established.

It is however, important to note that the impeachment process is more of a political one, not a criminal one. A president can be impeached and removed from office for "treason, bribery, or other high crimes and misdemeanors." The House determines what constitutes an impeachable offense and thus far has decided that obstruction of justice fits the bill. However, if a president is impeached based on obstruction of justice charges, it does not necessarily mean he or she has been charged with a crime.

Whether or not a president can be charged with the crime of obstruction of justice is a more controversial matter that has no historical precedent, though many experts argue that previous investigations of presidents for impeachment proceedings have proceeded with the assumption that a president can be indicted. Moreover, 13 different legal experts recently told Vox that the president is not above the law and can indeed be indicted for obstructing justice (and other crimes).

Andy Wright, a professor at Savannah Law School, drove this point home when speaking with Vox, noting the dangers of suggesting that a president is immune from prosecution:

As a White House lawyer under two presidents, I can tell you that Counsel's Office operates on the assumption that the president could obstruct justice. The president's role as chief executive may complicate what motivations are "corrupt" for an obstruction of justice statute. But Dowd's argument is the last refuge of a scoundrel, and it would lead us down a path to despotism.

Overall, Nixon and Clinton's impeachment proceedings clearly illustrate that presidents can obstruct justice, and suffer political consequences for doing so. While there is not necessarily historical precedent that demonstrates that presidents can be criminally indicted for obstructing justice, many experts agree that it is allowable under the law, especially considering the tenets of American democracy and the U.S. Constitution.