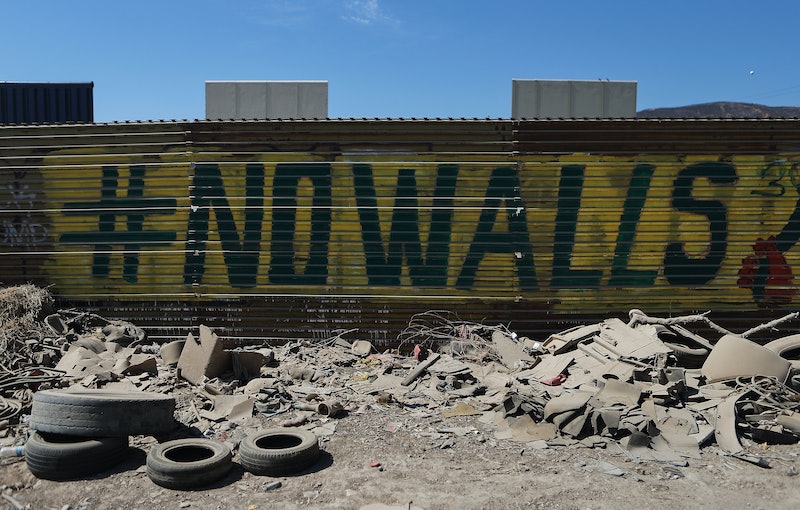 This week, the U.S. government faces a potential partial shutdown resulting from a clash between President Trump and Congress over border wall funding. Because of its prominence in the shutdown debate, you might be wondering whether construction on Trump's border wall has actually begun. Contrary to the president's claims on the matter, no new border wall sections have actually been erected since he took office, NBC reported.

The New York Times noted that, during a meeting with House minority leader Nancy Pelosi and Senate minority leader Chuck Schumer on Dec. 13, Trump claimed that much of the border wall had already been erected. "A lot of the wall is built. It’s been very effective," the paper reported that the president told the two members of Congress. In a tweet on Dec. 11, Trump also echoed similar claims, writing, " ... People do not yet realize how much of the Wall, including really effective renovation, has already been built ... "

However, NBC noted in a "fact check" on Nov. 27 that Trump's claims about the wall are misleading. The outlet indicated that, just like other administrations, the Trump administration is only in the process of repairing and replacing old border fencing — not constructing new barriers. The outlet added in a more recent fact check, from Dec. 11, that there are currently 650 miles of fencing along the U.S.-Mexico border, much of which was built before Trump became president.

NBC also noted that it's not clear whether these fences constitute part of what Trump now considers the border wall. However, the outlet indicated that, during his presidential campaign, Trump repeatedly suggested that fencing was insufficient and that, instead, a 2,000-mile-long barrier wall should be built between the two countries. Indeed, back in 2015, the Washington Post reported that then-presidential candidate Trump said during an interview with the paper that, “A wall is better than fencing, and it’s much more powerful. It’s more secure. It’s taller.”

While Trump's current stance on the wall versus fence issue is perhaps unclear, it is apparent that the president seems intent on possibly forcing a government shutdown if he does not receive border wall funding. Indeed, during an interview on CBS' Face the Nation on Sunday, senior White House advisor Stephen Miller asserted that Trump would do "whatever is necessary” to ensure that Congress approves border wall funding, Vox reported. The outlet noted that Miller told the show's host, Margaret Brennan, that a shutdown was certainly possible:

If it comes to it [a shutdown], absolutely. This is a very fundamental issue ... At stake is the question of whether or not the United States remains a sovereign country. Whether or not we can establish and enforce rules for entrance into our country.

As Axios revealed, Trump is seeking $5 billion to build his border wall. The outlet reported that Democratic party leaders have suggested they are not willing to allocate anywhere near that amount. Senator Schumer has offered $1.6 billion for border security, while Representative Pelosi has indicated she is only willing to continue border security funding at its current level of $1.3 billion, the outlet noted.

Overall, while Trump's claims about the status of the border wall's construction have been misleading, it is very apparent that the wall's funding holds particular significance for him, even as a potential partial shutdown looms. Trump and Congress have to agree to a new spending bill by Dec. 21 in order to avoid this fate and keep the federal government fully operational.