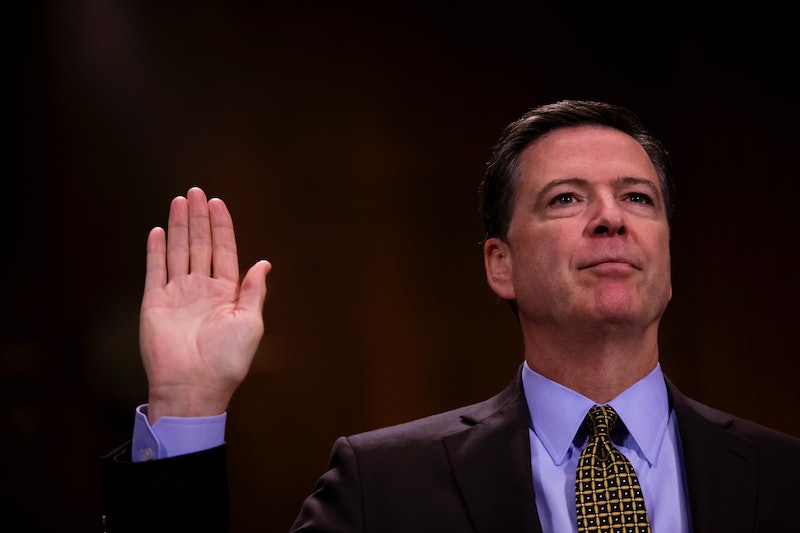 The Trump Administration's decision to remove James Comey from his position as FBI director on Tuesday surprised everyone — including even Comey himself, according to a New York Times report. But Comey's dismissal, while shocking and more than just a little controversial, isn't unprecedented. Comey is the second FBI director to be fired from the position in the agency's history. The only other FBI director to be removed from office was fired by none other than former President Bill Clinton.

Former FBI Director William S. Sessions was appointed to the position in 1987 during the Reagan administration, and held his role until he was ousted by President Clinton in 1993. Sessions had been under investigation by the Justice Department's Office of Professional Responsibility for quite a few concerning monetary exchanges. For example, he reportedly billed the FBI almost $10,000 to build a fence around his home and charged the government for personal travel, among other ethically questionable activities, according to a 1993 Washington Post report on the investigation.

Following the investigation's report, Sessions was asked to resign from his position and refused, prompting newly-elected President Clinton to fire him for his "disturbing" behavior. Sessions responded by defending his actions and speaking out against what he perceived was a politicization of the bureau:

Because of what I would term scurrilous attacks on myself and on my wife of 42 years, it has been decided by others, and now you know by the president of the United States, that I can no longer be as forceful as I need to be in leading the Federal Bureau of Investigation. I will speak out in the strongest terms about protecting it [the FBI] from being manipulated and politicized both from the inside and out.

This means that as of Tuesday evening, Comey and Sessions are the only men to be fired in the FBI's almost 100-year history. But according to The Washington Post, this statistic isn't quite as significant as it may seem. Only 11 men (yep, all men) have held the position since the FBI's inception, and one man, J. Edgar Hoover, held the role for an astonishing 48 years.

Comey, by contrast, was appointed as FBI director by Barack Obama in 2013, and was invited to keep the position with the Trump administration after the 2016 elections. After making numerous controversial decisions regarding Hillary Clinton's email investigation during the run-up to election day, including re-opening the investigation just days before voters hit the polls, Comey was ultimately fired on Tuesday.

All of this is to say that while Comey's dismissal certainly calls for scrutiny into what the Trump administration's motives may actually be, the firing of an FBI director is not altogether unprecedented. When talking pure statistics here, out of the 11 men who have served as FBI director, two have been fired. This means that about 18 percent of men who have held the position have lost it.

This doesn't answer any of the numerous questions that have resulted from Comey's dismissal, and it certainly won't console Comey. But it is an interesting history tidbit to keep in your back pocket.