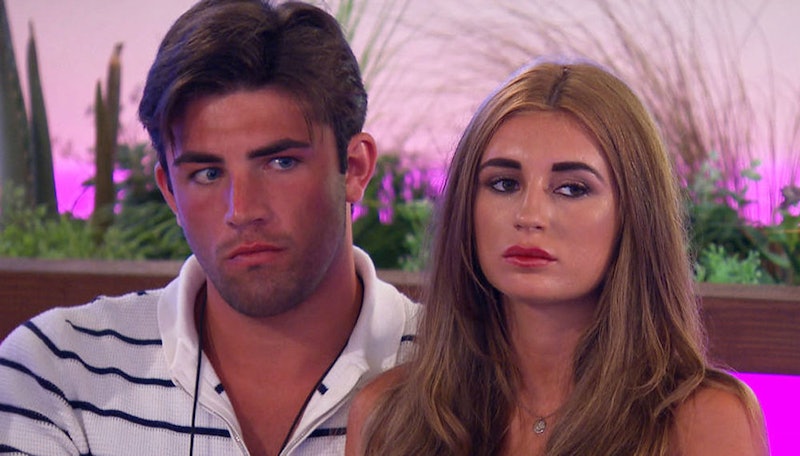 Forgive me, Love Island fans, because I could be about to break your heart. Rumours are circulating that Jack Fincham, committed fan of Dani Dyer and Danny Dyer, might have quit the show after arguing with Dani Jr about the results of his lie detector test. Jack failed the question most important to Dani — would his head be turned outside the villa? — resulting in an emotional confrontation between the show's longest running couple. And in the teaser trailer for Wednesday's episode, Jack says, "I’m not having this conversation, I’m going." So has Jack really left Love Island?

Breathe a deep sigh of relief, Jack and Dani devotees: I spoke to a representative at ITV, who told me: "He's still in the villa". Doesn't it feel like a heavy weight has lifted from your heart? There's still hope for Jack and Dani, and still a chance Jack will get his Danny Dyer canvas signed. No need for mass national grieving just yet.

That's not to say, of course, that everything's peachy between the once unshakeable pair. That argument, atmospherically lit by a flickering fire pit, was a pretty nasty one, and it's hard to imagine the pair will snap back to normal right away. How, then, did it all begin?

Well, Jack didn't do all that well when strapped up to the lie detector on Monday's episode. Though the machine reported he was telling the truth when he revealed he loved Dani, and could picture himself having a family with her, he failed a handful of major questions. As the Mirror recaps, Jack was revealed to be lying when he answered "no" to questions including, "Do you feel like you settled too quickly with Dani?" and, hilariously, "Did you couple up with Dani because you knew who her dad was?" Not a strong start, admittedly, but things really began to crumble when Jack faced — and failed — Dani's most important question: "Could you be tempted by other girls outside of the villa?"

Dani told cameras: "If anything that was the only question I cared about, and he failed it for me." The ensuing argument then got personal quickly. Dani told Jack, who's previously admitted his past romantic failings on the show, "I know you haven’t been amazing, really, to most girls you’ve been with," adding, "What makes me so different?" Jack's assurances didn't do a lot to assuage Dani's worry — though he told her, "I’ve never loved anyone how I’ve loved you," and insisted, "I'm not going to be unfaithful to you," Dani couldn't be convinced.

Then it was Jack's turn to get upset, telling Dani, "I’m still annoyed that you don’t care about all the nice things." But Dani wasn't having it, retorting, "You shouldn’t feel privileged to get them answers." And the conversation ended with Dani walking off and Jack calling her "pathetic" — bit uncalled for, Jack, don't you think?

This might not be the end of the road for Jack and Dani, however. According to the Independent, "the validity of polygraph testing is often debated — with the general consensus being that lie detector tests are inaccurate." That's because, according to the American Psychological Association, there's "no evidence that any pattern of physiological reactions is unique to deception". Tellingly, the Independent reported: "Certain triggers such as increased heart rate may also occur during moments of anxiety, such as if your relationship depends on the answers of a lie detector test, and not just in cases of lying." Quick, somebody send this article to Dani, this is a matter of utmost urgency.

So Jack's still in the villa, at least — though there's a very real chance he's sleeping on the sofa. I'm begging you, Jack and Dani, to patch things up soon: the entire nation is depending on you.