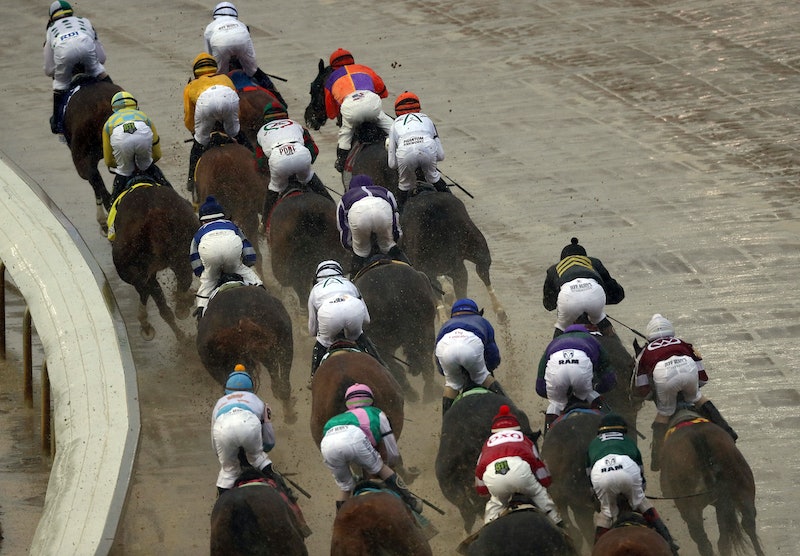 There's a chance that the horses running Saturday's Kentucky Derby might be stopped by an unforeseen event, like a last-minute injury —but the race will definitely move forward no matter what. Or at least it always has in the past. The Kentucky derby has never been canceled, not for any reason in its previous 144 iterations.

Many sporting events were canceled either during the Great Depression or during the World Wars. But not the Kentucky Derby. "The race is often referred to as 'The Run for the Roses' and has continuously produced 'the most exciting two minutes in sports'; uninterrupted, even when coinciding with profound historical events like The Great Depression and World Wars I & II," the official race website reads.

Even a postponement would be odd. In a CNN interview in 2014, Darren Rogers, Churchill Downs' senior director of communications and media services, said that a "postponement would be highly unusual" for the event. "This will be our 140th Derby and we haven't postponed one yet," Rogers told CNN.

Delays, though, are another story. "Lightning or a washout of the track could potentially cause a delay," Rogers told CNN. In 2018, there was a decent rain, but it didn't affect what time the horses left the starting gates.

This year, the economy is doing much better, but the race still remains fancier than the average sporting event. If you're worried that the event might be canceled, that's probably because of the weather. Take that into consideration, but there are some expectations come rain or come shine.

Traditionally, enthusiasts go to the race dressed up to the nines. "Both female and male attendees pull out all of the stops when selecting their Kentucky Derby and Oaks apparel," the race's official website reads under the "What to Wear" section.

The event is billed as the "chance for every female to express her inner Southern Belle" and the organizers advise that no one hold back in doing so. The advice for men is a little more traditional, but colorful palettes are encouraged.

Weather can play a role in what to wear, too, obviously — and the cancellation is almost surely not going to happen. So read up on the weather advice from the "What to Expect" page on the Derby's official site. "Weather, as with any outdoor event, is a wildcard at the Kentucky Derby!" the page reads with advice to check the weather forecast before you go. They add it's best to bring a "lightweight, clear rain poncho" with as umbrellas are strictly verboten as they block others' views.

So, if you love horse races, never fear, the event is almost surely on. That's come rain or come shine, though, so you'll need to dress appropriately.

More like this
The David Beckham Qatar Controversy, Explained
By Sophie McEvoy
Twitter Is In Awe Of Alex Scott & Her Show Of Solidarity At The 2022 World Cup
By Sophie McEvoy
Jamal Musiala Has The Cutest Nickname Based On A Disney Character
By Catharina Cheung
Romeo Beckham Shared A Sweet Farewell Note From “Proud” Sister Harper
By Sam Ramsden
Get Even More From Bustle — Sign Up For The Newsletter