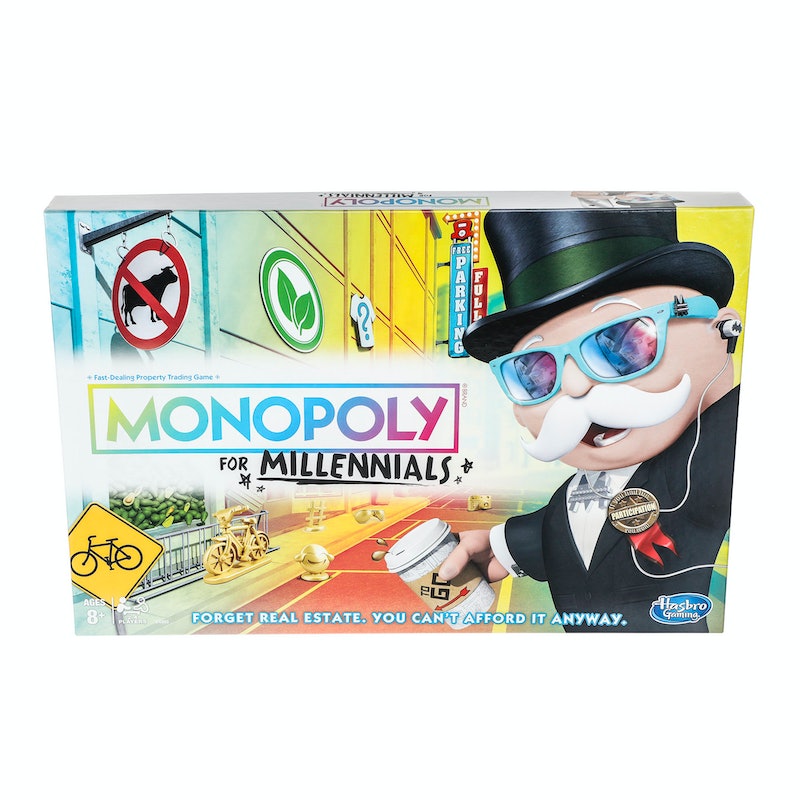 Hasbro has released a new version of its classic real estate investment game, only this time there's a twist. The board game company’s Monopoly for Millennials, in classic millennial fashion, doesn't include buying any real estate, Mashable reports: Unlike past versions of the game, you buy “experiences” — like going to the vegan bistro or a meditation retreat — instead of property to win, says Mashable. And, according to Mashable, whoever has the most debt gets to go first.

The game description at Walmart, where it's currently sold out, says Monopoly for Millennials gives players a break from “adulting” by forgetting about paying your rent and having you collect experiences at the “hottest destinations,” one of which includes your friend’s couch. The board game cover seems to explain this change to the game format by saying, “Forget real estate. You can’t afford it anyway.” (There are no mentions of avocado toast involved.)

To drive the whole millennial messaging home, Hasbro is selling the new board game for $19.82, supposedly the year the millennial generation begins, according to the A.V. Club. But the A.V. Club says Hasbro is actually off by a year; if you go by data from the Pew Research Center, the millennial generation actually starts in 1981. In any event, some actual millennials aren't too happy with Hasbro for the company's latest version of the game, taking to Twitter to let the company know how they feel.

Twitter user @SarahTeeRaymo said, "I'm not sure who @hasbro made Monopoly for Millennials for? As if we don't get sh*t on enough lol ... A game about millennial life should absolutely include paying rent. A lot of it. The vast majority of us can't afford to spend money on 'experiences.' Anyway, disappointed."

"I think [Monopoly for Millennials] is pretty offensive and uses stereotypes to make fun of millennials, but I am a millennial so I'm probably too close to the issue," said Twitter user @_AmandaPeterson.

In case you haven't played in a while, the original version of Monopoly focused heavily on buying, selling, and trading property, according to the game description. The whole point of the game is for players to try to get rich and to bankrupt their opponents to win the game.

Many of us are probably a little irked by Hasbro's new version of the game because it plays one some pretty tired stereotypes of our generation. In reality, the family wealth of millennials is 34 percent lower than earlier generations and is projected to get worse, according to Bloomberg. While Baby Boomers experienced decades of healthy financial markets that allowed them to pay off mortgages and debts, says Bloomberg, millennials lived through a recession weighed down by student loan debt and low wages, the effects of which are still being felt nearly 10 years later.

That means millennials have been forced to "forget" paying rent or buying real estate because they're barely getting paid a livable wage, and many are drowning in student loan debt. And those super hot experiences they're supposed to collect throughout the game? They can't actually afford those IRL, no matter what Instagram says. That's why millennials have learned to appreciate the little things in life. You know, like avocado toast.

No matter how you feel about Monopoly for Millennials, try not to let it get under your skin. The economic challenges facing the millennial generation are proven. Just remember a game of Monopoly can't stop you from reaching your goals in life.

More like this
The Best Memes & Tweets About The Discontinuation Of The Choco Taco
By Alexis Morillo
Jennifer Coolidge Needs 'Legally Blonde 3' To Happen So She Stops Getting Hot Dog Jokes
By Jake Viswanath
I Tried The $20 TikTok Viral Oishii Strawberries — Here's What I Thought
By Sophie Hanson
What Does POV Mean On TikTok? The Popular Acronym, Explained
By Emma Carey
Get Even More From Bustle — Sign Up For The Newsletter