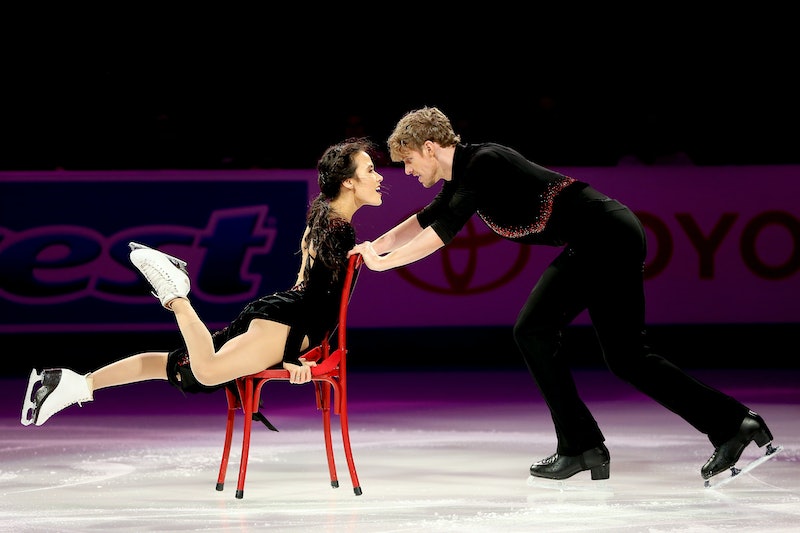 It's difficult to imagine that figure skating, arguably the most popular and recognizable sport in the Winter Olympics, started out as a way for people to get from A to B. (Skating begun as a way to travel across Dutch canals as early as the 13th century.) Now, it's the most eccentric and fashionable event at the Games. You may well ask: Exactly how have figure skating rules changed at the Olympics?

Firstly, some background: As the very first sport included in the Winter Olympics in 1908, figure skating has seen many iterations throughout the years. The founder of modern-day figure skating as we know it was Jackson Haines, an American ballet dancer and ice skater. Haines was the first person to incorporate ballet, music, and dance into skating. His skating style, described as the "International Style of Skating," included jumps, leaps, turns, and spins, and didn't actually become popular in the United States until after Haines' death in 1879.

Only men could compete in the first figure skating championships, as was the case with most athletic competitions at the time. In 1902, the first woman joined the sport: Madge Syers, when she entered the World Figure Skating Championships. It was controversial at the time to have a woman compete, and so a separate "ladies" event was created in 1906.

Ice dancing wasn't even a thing when the sport first debuted at the Olympics — it became a medal sport in 1976. In ice dancing, each team competes in a short dance set to a different required style each year and a free dance, which is four minutes in length. In 2014, teams danced in a quickstep with the choice of either a foxtrot, the Charleston, or swing.

Since the 1990s, when figure skating made headlines for the infamous Tonya Harding/Nancy Kerrigan controversy, the format of the sport itself hasn't changed much. In all categories, each competitor or team competes in two rounds: a short program with specified required elements — at the Olympics it's two minutes, 50 seconds in length — and a final free skate, which can range from four minutes to four minutes, 30 seconds.

The way the sport is judged, however, has evolved. Following a high-profile judging scandal at the 2002 Olympics, where allegations arose that the pairs' figure skating competition had been fixed, the International Skating Union (ISU), figure skating's governing organization, developed a completely new judging system, with the intent of making the scoring more objective and ridding the sport of back-room politics.

A 6.0 used to mark a perfect figure skating score, but since 2004, all ISU figure skating competitions have used the Code of Points system. Under this new system, each technical skill a skater or team performs is assigned a "base value" of points, in addition to a level of difficulty. For instance, a triple axel is more complicated than a triple loop, so it would earn a higher base value of points (8.5 compared to 5.1). Competitors are also judged on execution and artistry.

Figure skating takes place throughout most of the Olympics, with competitions occurring during 12 days of the games. At the 2018 Olympics, the team skating event will begin Thursday, Feb. 8, followed by the pairs event, with medals being awarded Feb. 14.

Medals for the men's event will be given out Feb. 16, and women skaters will receive theirs Feb 22. All figure skating events will conclude with a final exhibition gala on Saturday, Feb. 24.