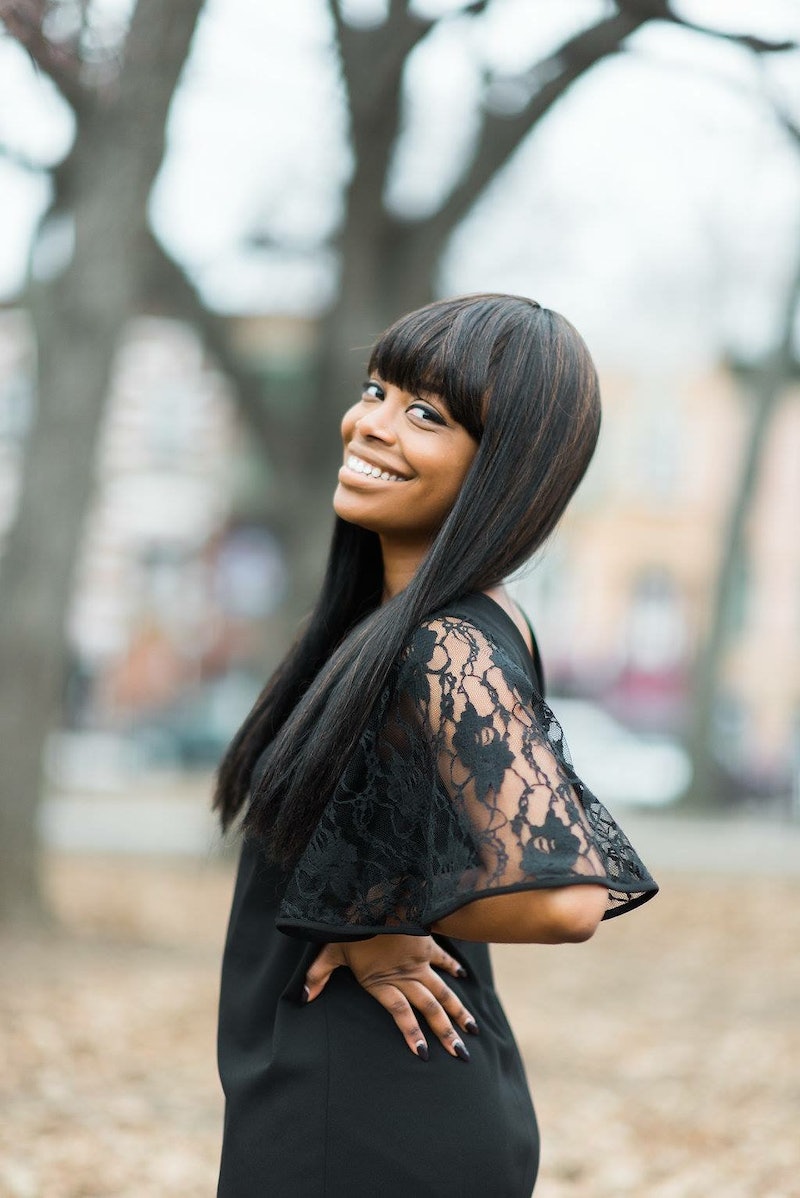 Growing up in a small suburban, southern town, I went to a mostly white school, which meant I was often the darkest — or one of the darkest — students in the classroom. I initially never had a problem with my deep skin tone being pointed out — but until my peers started to make it clear that my form of beauty didn’t measure up to my lighter skin counterparts.

The first incident took place during middle school. I remember being in the cafeteria during lunch break when a white classmate blatantly told me: “Mary, I couldn’t see you with a white guy. If you were a little bit lighter I could." After they made the comment, the lunchroom — which was notoriously rambunctious — was so silent that you could’ve heard a pin drop, and I was stunned. Regardless of the color of my crushes at the time, the fact that someone felt like they had the right to comment on who my complexion would allow me to date or not date stung. These types of embarrassing instances continued throughout school, and they're what led me to develop major anxiety whenever I've had to put my skin in the spotlight — namely with makeup.

At the time, I had no idea why my dark skin was considered to be undesirable. But as I got older, I began to understand that colorism was to blame. Within the black community, specifically, colorism is deeply rooted in slavery — and the systemic divisions are still embedded in the psyche of many of us today. Historically, slaves with darker skin were relegated to the fields, while lighter skinned people would work less labor-intensive jobs inside the plantation homes. Although both forms of work had their own horrors — such as the tireless work those outside had to endure, while those indoors were often victims of rape and sexual assault — the racial caste system created during that time has centered whiteness as the benchmark for beauty.

However, even though I had an understanding of the history of colorism, it didn't make the memories from middle school any less painful. In fact, they remained in the back of my mind for years to come, and helped to fuel my complicated relationship with foundation.

My parents didn't allow me to wear makeup until my later years of high school, and once I came of age, I was excited to finally be able to go to a beauty store to look for my shade. But when I arrived to one in Manhattan, I experienced one of my worst nightmares — and it frankly almost induced a panic attack.

While I was browsing for foundation that day, the white makeup artist who assisted me — rather hurriedly — with my selections, decided to insinuate that my skin color was a problem. After sitting me down in the makeup chair to test out a few shades, she began applying the products, while commenting rather loudly, and in a disgusted tone, that I was “too dark” for some of the shades.

With flashbacks to the middle school incidences coming to mind, I still tried to remain calm, and patiently sat and waited for her to finish applying the other foundations. But hearing her comments made my heartbeat increase, and I became short of breath — clear indicators of an oncoming panic attack. That moment brought me back to being mocked in front of a crowd in the lunchroom. I knew I had come a long way since then, but I didn’t need yet another white person telling me — in an annoyed tone — how dark I was, as if my skin tone was a negative attribute.

Shortly after we wrapped up, and she told me she was leaving for a lunch break, I approached the store manager, who apologized and found another artist to assist me instead. Thankfully, I was able to settle on Cover FX's Total Cover Cream Foundation in N90 that day. But despite being able to find a shade that worked for me, the incident once again left me feeling like my dark skin was more of an inconvenience rather than something to be celebrated.

Much like the lunch room encounter, being called out by the makeup artist haunted me for quite a while afterwards. For years, I had difficulty feeling comfortable trying on full faces of foundation in stores — despite brands like Fenty Beauty setting a new trend for inclusive shade ranges.

But even after 40 shades became the new benchmark, and more products were now available for me, the underlying issue was that the thought of dealing with the in-store makeup artists was quite triggering. Their jobs are to assist all customers, regardless of race, yet my encounter left me feeling like I would have only gotten the adequate help I needed if my skin was lighter. Through this sentiment, coupled with the fact that I was officially diagnosed with General Anxiety Disorder earlier this year, I've come to realize that I desire a safe space to try on various shades, without the unwarranted comments about how I’m “too dark" for any particular product.

For me, that safe space was created when I started watching dark-skinned YouTubers, like Jackie Aina, Makeup Shayla, and Nyma Tang, who all give honest reviews of foundation lines. By just sharing their perspective on both mainstream and indie lines, they each amplify the impact and visibility of dark-skinned women in the beauty industry. These YouTubers hold brands accountable when it comes to delivering quality products to dark-skinned customers. They save viewers money by reviewing the products themselves. For me specifically, they relieve the fear of having to deal with insensitive people at the makeup counter.

I still experience some anxiety walking into a beauty store, but their videos make me feel at least more prepared when looking for makeup. I go in being honest with myself, and the associates helping me, when it comes to figuring out if the shade or undertone doesn't match, before they can comment. And more than anything, I've become increasingly patient with myself when shopping, since I have a more tactical shopping plan thanks to their YouTube reviews. These women have even helped me to find my go-to shades: NARS Skin Tint in Seychelles for everyday and NARS Longwear Foundation in Caracas for on-camera work, so I don't even find myself going to the store as often as before.

Watching YouTube has made a world of difference for me when it comes to loving my skin, and finding the makeup to match. But it shouldn't just be up to the online community to make black women like me feel comfortable and confident in these spaces. How employees promote products and help clients with a range of skin tones in brick-and-mortar stores should come with cultural awareness and sensitivity to colorism. By embracing this ideology, more people with my complexion, and those who are darker, won't become anxious every time we step into a beauty retailer and ask for help from makeup artists of all races, whether or not we know our shade.