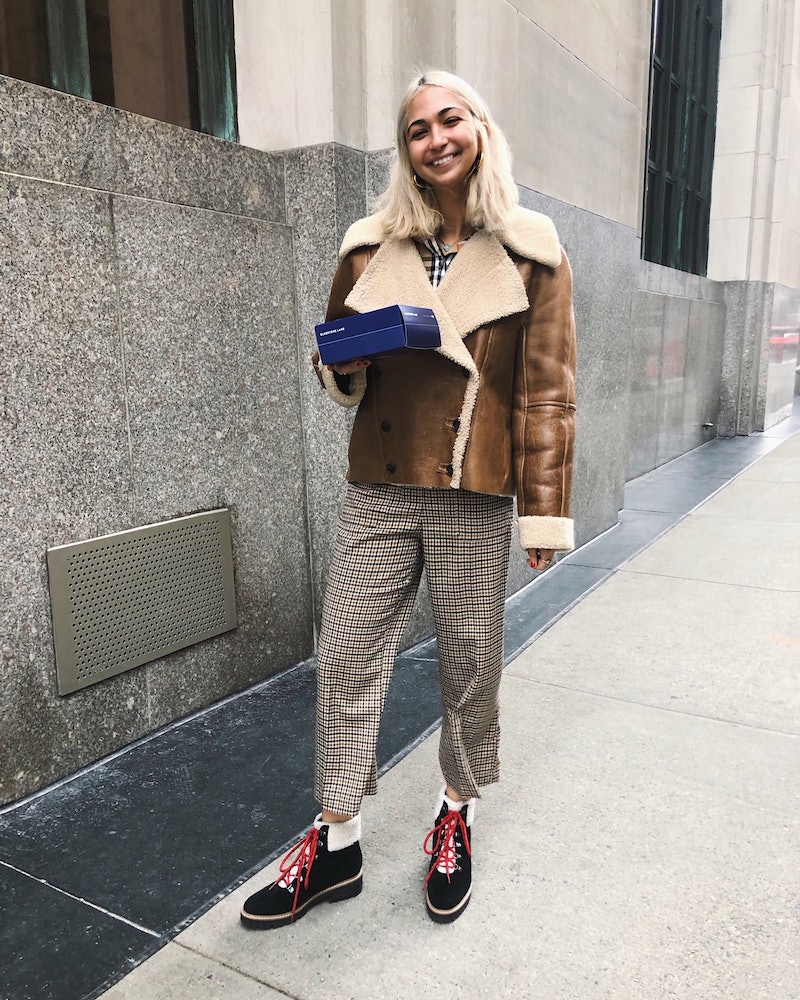 When I was young, I used to think that the concept of a good "work-life balance" was for old people. Only people with ordinary lives — a nine-to-five job, a savings account, etc. — could obsess over such ordinary things, right? As aspiring writer, I imagined it would be impossible for me to ever work too hard or too much. Since my day job wouldn't be something I did, but instead, who I was as a person, I would never really feel on or off the clock. I'd make my own schedule, live by my own rules — my life would become my art. It wasn't until I began an entry-level position in media and threw 100 percent of my time doing just that, that I realized how critical work life balance was — so critical, in fact, that my body gave out after six months without it.

My first "big girl" job out of college was my dream position, perfectly tailored to my professional pursuits. I was working for a publication that I admired, writing stories that I truly and wholeheartedly cared about. I loved my co-workers and the office space — I looked forward to coming in everyday. But I was completely overwhelmed by the demands of my specific role. I was working as an executive assistant, a job tailored for someone with several years of administrative experience. And while I was incredibly grateful for the opportunity, I was admittedly in over my head when it came to my responsibilities. As much as I tried to convince myself otherwise, a seed of self-doubt had been planted, constantly taunting me with my own greatest fear: that I was simply not good enough.

To prove myself wrong, I worked overtime. I stayed in the office until 10 p.m., sometimes later, and upon returning home, would attend to my emails. I would wake up in the middle of the night and grab my phone in a panic. I tried my best to maintain my work-life balance: I made dinner plans with friends, and tried to consistently see my partner. But I found myself hollowly looking into my partner's eyes across the table, clutching my phone in my palm, using my peripheries to scan for any texts or missed calls from work. Even when I was with him, my head was always somewhere else.

I resolved that there was no use in attempting to do anything other than work; I'd just find myself on my laptop anyways. So, I gave up my routine. I stopped exercising. Despite my knowledge that I had to manage two chronic illnesses that required me to be extra attentive to my nutritional intake, I stopped prioritizing meals. Nasty dreams kept me from sleeping through the night, and crippling anxiety prevented me from focusing on anything else throughout the day.

I kept telling myself that I was fine, everything was fine: Everyone has to be dragged through the mud a bit before achieving their career goals. I assured myself that I could suck it up — after all, I was no quitter. But while my brain was muttering this mantra over and over again each time I came close to the edge, my body began to revolt. Physically, I had had enough.

"The mind and body are definitely linked in terms of stress response," Dr. Jean Kim, Clinical Assistant Professor of Psychiatry at George Washington University, tells Bustle. "Being overworked will lead to stress and strain on relationships (in both places) and increase the risk of depression and anxiety and many medical illnesses."

For me, it started with a minor itch. I began to get eczema, a product of my dry skin exposed to the cold, in inner crease of my elbow. The spot would tickle, and I'd itch to feel better. I started to find myself scratching at it almost as a direct and immediate result of work stress. Submitted a report in the wrong format? I'd itch like my life depended on it. Accidentally deleted notes from a brainstorm? I was clawing at myself like Wolverine. Upon my mother's desperate request, I booked an early morning appointment with an expensive dermatologist, who informed me that I had developed a stress rash. She prescribed me an antibiotic ointment, and recommended I consider making a "lifestyle change."

Then came the changes in my menstrual cycle. I'd had a light, irregular period for as long as I could remember, but suddenly, I stopped menstruating all together. My non-periods were accompanied by scattered spotting, unbearable cramps, and random cravings — all at different weeks and times. Despite being on the same birth control since high school, I considered switching or dropping the pill altogether altogether. Panicked, I called in an appointment with my gynecologist. After running a few tests, she informed that I had an incredibly common strain of HPV. I was shocked, since I had been with the same partner for over a year. But my doctor informed me that I had most likely picked up the virus years prior: It had been lying dormant in my system, and was suddenly triggered by stress. She asked, was I under more stress than I was previously? I struggled to formulate a response.

Just when I thought my symptoms couldn't get any worse, my digestion medication seemingly stopped working. I was experiencing horrible acid reflux and heartburn, which led me to spend my days hunch over my desk in searing pain. When I did try to eat something, I'd end up in the bathroom for 30 minutes at a time. I was bloated and uncomfortable, and my blood sugar levels were down, meaning I was lethargic. I had difficulties focusing, some days even struggling to keep my eyes fixated. When my gastroenterologist suggested that perhaps major changes in my lifestyle had led to this shift, I rolled my eyes and ignored her. Instead, I sat patiently as she wrote up a prescription for a new medication. I still wasn't ready to listen.

It took having my first-ever panic attack for me to understand just how my lack of work-life balance had impacted my body. After a particularly tough day at work, I found myself outside of my partner's office building. I was shaking uncontrollably, sobbing so hard that I couldn't breathe, my knees weak. He walked me through a few breathing exercises, and eventually brought down my heart rate. I dismissed the incident as a one-time thing, but I truly wish I hadn't: two months later, I fainted in the bathroom before a meeting. Humiliated, I booked a consultation with my general practitioner, who recommended I see a psychiatrist for anxiety. Finally, she posed the question that had been edging its way to the forefront of my mind for quite some time: Is it all — the dream job, the connections, the experience — worth it?

For the first time in a long time, I allowed my body to answer — and this time, I listened. No, it was not worth it. Not even close.

So, how does someone with poor work-life balance finally improve her life for the better? By putting my health first, and recognizing that I can't produce my best work if I am not my best self. I needed to prioritize myself first and foremost, and that began asking for help, and finally, switching my job. I left that job, not because I gave up trying or became a quitter. Instead of further dissolving into negative self-talk, I listened to the signals that my body had been sending me for months, and decided to take my life back into my own hands. It was scary at first, accepting the unknown — worrying about what my future would look like, and whether I would still be a writer, an artist, without my title.

But you know what? It was a big f*cking relief. For the first time in months, I felt like I could breathe again. After a few weeks, the nightmares start to slip away. I would no longer get anxious every time my phone lit up. I began exercising again, and eating in accordance with my body's needs. I made time for loved ones, and engaged in conversations that I knew I could reciprocate. I reintroduced myself to the activities that I once loved.

So what is a good work-life balance? In my opinion, it's the ability to get as much out of your job as you give to it. It's putting in work that is rewarding, and being rewarded by the work. It's both feel valued, giving, and getting value every day. You do not need to sacrifice your health to further your career. The balance is a thin line to tread, one that bends at the seams. But when it does, just listen to your body. When you give your body what it needs, your body will give you the world in return.

More like this
Savannah Guthrie Got Her First-Ever Tattoo With This Former Wild Child
By Suzanne Zuckerman
These 3 Zodiac Signs Could Write A Bestselling Novel
By Brittany Beringer
Twitter Has *A Lot* To Say About The "Single Penalty”
By Sam Ramsden
The Mysterious Gunther Corporation From 'Gunther’s Millions' Has Dissolved
By Brad Witter
Get Even More From Bustle — Sign Up For The Newsletter
From hair trends to relationship advice, our daily newsletter has everything you need to sound like a person who’s on TikTok, even if you aren’t.