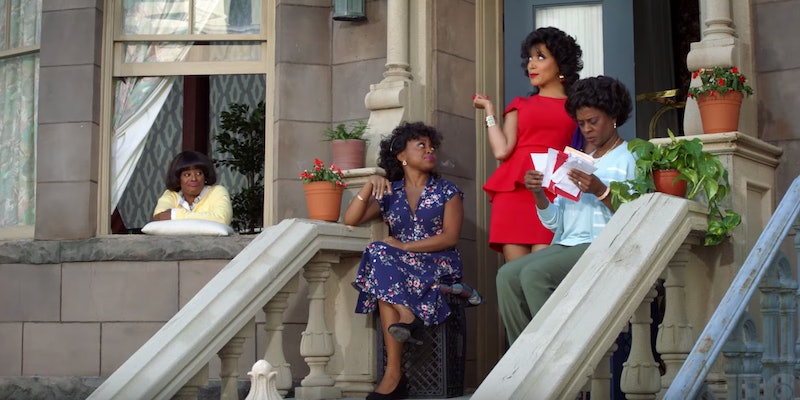 If you thought you could cancel your HBO subscription after Euphoria and Big Little Lies, it turns out, you'll have to hang on to it a bit longer, because the channel is rolling out a brand new comedy show that looks like it'll be your next favorite thing. The new A Black Lady Sketch Show trailer shows off just how original and clever this sketch comedy show will be, while highlighting its impressive roster of guest stars too. Even if sketches aren't your thing, A Black Lady Sketch Show might very well be.

According to The Hollywood Reporter, HBO's newest comedy series will be the "first sketch comedy in TV history to be written by, directed by and starring an array of black women." But it's more than just a historic show — based on the trailer, it'll be plenty funny too. The sketches seem to focus on the various lives black women lead, all in an array of locations, situations, and sometimes featuring a famous guest or two.

The show comes from the creative mind of Robin Thede, who stars in the series. The comedian created the show, and worked as an executive producer, writer, and star. Thede has written for several projects, including her BET show The Rundown with Robin Thede, The Nightly Show with Larry Wilmore, and The Queen Latifah Show. Issa Rae, who also has her own HBO show, Insecure, is also an executive producer on the show, and will feature in front of the camera as well.

On July 7, when the trailer dropped, the show's official Twitter feed shared some statements from members of the cast. "I'm the first black woman to ever direct a sketch comedy show," Dime Davis, director for this show and also previously a writer for The Chi, said at Essence Fest. "I'm the first but I definitely won't be the last." Brunson also reflected on what this show means to her. “My entire career has been spent either alone or entirely white spaces," Brunson said. "But joining [A Black Lady Sketch Show] made me feel like I got to be another layer of black woman. I don't have to represent ALL the black women in the room.”

Thede, meanwhile, talked about the limitless possibilities of comedy, saying, "There are no rules in comedy, as long as it’s smart and you don’t punch down.” And Black commented on the unique, and very welcome, writers' room they had. “Being in a writers’ room with all black women means I don't have to explain myself.”

When A Black Lady Sketch Show premieres on HBO August 2, it will introduce a brand new kind of comedy, one made entirely by black women. And if it's anything like the trailer, it's sure to be a wild, hilarious ride.

More like this
The Black Lotus Staff Has "Had Enough" In The 'White Lotus' Spoof From 'SNL'
By Brad Witter
Darren Harriott Is Keeping His Love Life Away From The Spotlight
By Darshita Goyal
Ozzie’s Coming Out Scene With Kitty On 'That ’90s Show' Has Twitter Sobbing
By Brad Witter
This 'One Tree Hill' Wardrobe Error Is Going Viral On TikTok
By Brad Witter
Get Even More From Bustle — Sign Up For The Newsletter
From hair trends to relationship advice, our daily newsletter has everything you need to sound like a person who’s on TikTok, even if you aren’t.