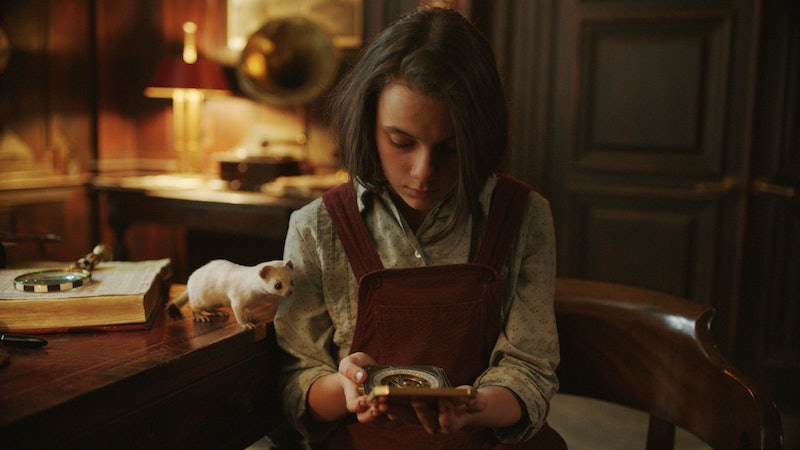 HBO is gearing up for the release of their next epic fantasy series with the full-length trailer for His Dark Materials. The BBC co-production is set to premiere Monday, Nov. 4 at 9 PM, and the extended look at the series is already giving off Game of Thrones vibes. Like Game of Thrones, His Dark Materials is based on a book series with a fully realized fantasy world and mythology. The new footage of the series illustrates just how unique this alternate England landscape is with zeppelins, an armored bear, and first looks at the character's daemons (which are talking animal representations of a person's soul).

In terms of plot, His Dark Materials bears little resemblance to Game of Thrones. However, the trailer suggests that the shows already have two vital things in common: both are happy to throw viewers into the deep end of their complex worlds with little explanation, and each series includes a young female protagonist whose wildness is central to her destiny as her world's savior.

Logan's Dafne Keen stars as Lyra Belacqua, a girl who grows up doing as she pleases in an alternate universe version of Oxford. Her parents are dead and her uncle is a cold and infrequent visitor, so until her friend disappears drawing her into an overarching conspiracy involving a mysterious element known as Dust, she is largely allowed to raise herself with a little help from the scholars and servants at the university. In many ways, her story mirrors Arya Stark's: her carefree childhood spent ignoring the expectations placed on her as a young woman from an affluent family gives way to a dangerous adventure that forces her to learn new ways to rely on herself for survival.

In addition to Keen, the series stars James McAvoy as Lord Asriel, Ruth Wilson as the terrifying Mrs. Coulter, and Lin-Manuel Miranda as an adventurer named Lee Scoresby. The series is written by Harry Potter and the Cursed Child writer Jack Thorne, with Tom Hooper (The King's Speech) directing the first two episodes, as reported by HBO.

Season 1 is set to chronicle the first book in Philip Pullman's His Dark Materials trilogy, The Golden Compass. Meanwhile, due to the second book, The Subtle Knife, picking up hours after the end of the first, Season 2 of the series has also already wrapped filming, per Entertainment Weekly.

During a Sept. interview with EW, the series' executive producer Jane Tranter explained the need for Seasons 1 and 2 to film back-to-back, and it all hinges on the show's 14-year-old lead. "Our feeling was we really couldn't leave more than a very small gap between the end of when Dafne Keen finished filming, which was December 2018, and when she started again, July 2019," the exec producer said. "That was basically the biggest gap that we could possibly do and still have her come back and convincingly look like it was moments, hours later [in season 2]. The BBC and HBO very kindly said, 'Let's make 16 episodes across the two books and go for it.'"

As stated in the trailer, the fate of multiple worlds resides in Lyra's hands. Season 1 begins in Nov. on HBO. A premiere date for Season 2 has yet to be announced.

More like this
Twitter’s Reaction To HBO’s ‘Game Of Thrones’ Jon Snow Spinoff Idea Is Chaotic
By Stephanie Topacio Long
Emilia Clarke Shares More Details About The New 'Game Of Thrones' Series
By Maxine Harrison
At 14, Jenny Han Wrote Rom-Coms About Her Friends & Fan Mail To Leo DiCaprio
By Alyssa Lapid
'The Summer I Turned Pretty' Book Ending Is An Emotional Rollercoaster
By K.W. Colyard
Get Even More From Bustle — Sign Up For The Newsletter