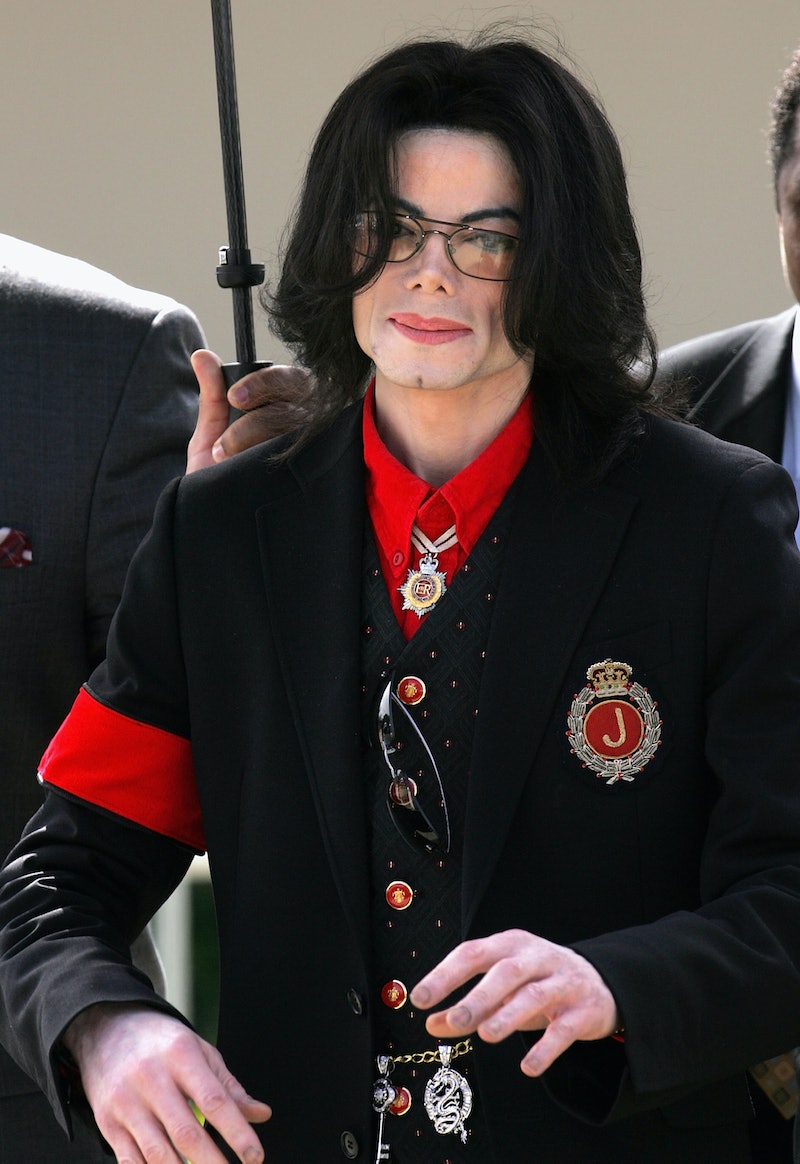 Back in January 2019, a documentary concerning Michael Jackson premiered at Sundance and caused a great deal of controversy about the late singer. And now that the trailer for HBO's Leaving Neverland has been released, it's easy to see why that was. The footage centers around interviews with two men, Wade Robson and James Safechuck, who both claim in the documentary that they were allegedly abused by Jackson when they were young, in the late '80s and early '90s. Jackson's family has since released a statement about the documentary on Monday, Jan. 28, calling it a "tabloid character assassination" and "public lynching," according to Variety. So the trailer is just the tip of the iceberg of what's sure to be a worldwide debate when the film gets released to the public.

This isn't the first time Robson and Safechuck have spoken about their allegations against Jackson in the past. In fact, four years after the singer's death, in 2013, Robson sued the Jackson estate, citing abuse allegations he claimed spanned over the course of a seven-year period. The judge in charge of the case ended up dismissing the lawsuit in 2017. Prior to that, however, Robson had testified in the singer's defense during Jackson's 2005 criminal trial, according to Page Six, during which he claimed that Jackson had never molested him. Safechuck echoed similar sentiments during the 2005 trial, in which the singer was accused of molesting a 13-year-old boy, and Jackson was eventually acquitted of all charges.

But the trailer for the new documentary claims that Jackson did indeed molest both Robson and Safechuck, and features both men recalling the alleged sexual abuse they claim to have suffered at the hands of Jackson when they were children.

“The days were filled with magical, childhood adventure experiences,” Robson can be seen saying in the trailer, speaking of trips to the famous Neverland Ranch. “[It was] playing tag, watching movies, eating junk food, anything you could ever want as a child.”

“It’s like hanging out with a friend that’s more your age,” Safechuck adds in the trailer, while their mothers go on to describe Jackson as seeming like a "caring kind soul" who seemed to be really into kid things. Shortly after that, though, the clip takes a much darker turn. “He told me that if [people] ever found out what we were doing, he and I would go to jail for the rest of our lives,” Robson claims in the clip.

The official synopsis HBO released along with the trailer reads as follows:

"Leaving Neverland is a two-part documentary exploring the separate but parallel experiences of two young boys, James Safechuck, at age ten, and Wade Robson, at age seven, both of whom were befriended by Michael Jackson. Through gut-wrenching interviews with Safechuck, now 37, and Robson, now 41, as well as their mothers, wives, and siblings, the film crafts a portrait of sustained abuse, exploring the complicated feelings that led both men to confront their experiences after both had a young son of his own. Directed by Dan Reed."

Many reviews of the documentary found the accusers side of the story very convincing, with Variety calling the interviews a "powerful and convincing testimony that Michael Jackson was guilty of child sexual abuse." And while Jackson's family has disputed the allegations, Reed stands by the film. He recently told Rolling Stone during an interview that neither Robson nor Safechuck were paid to do interviews for the film, and that the two men were kept separated during the process so that they couldn't influence each other's stories.

The documentary is set to air in two parts on March 3 and March 4, and based on the brief snippets we've seen so far, the controversy surrounding this project has only just begun.

More like this
Christina Perri Had No Idea Her 'Twilight' Song Is On YouTube's Top 100 Chart
By Radhika Menon
Madonna’s Reason For Directing Her Own Biopic Is So Madonna
By Maxine Harrison
Lady Gaga Will Star In 'Joker: Folie À Deux' With Joaquin Phoenix
By Jake Viswanath
Taylor Swift Calls Dwayne Johnson "The Man" After Revealing New "Taylor's Version" Song
By Jake Viswanath
Get Even More From Bustle — Sign Up For The Newsletter