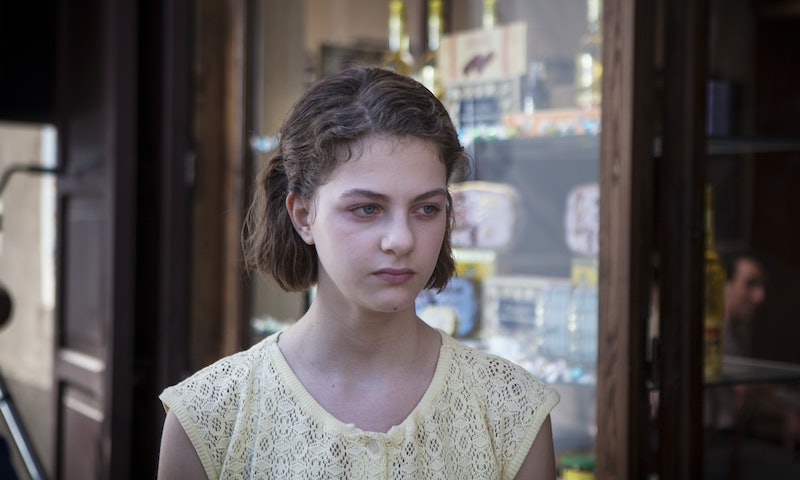 From The Godfather to The Sopranos, the most prominent depictions of Italian-Americans in pop culture often come from stories about organized crime. But as thrilling as watching criminals wake up to find bloody horse heads in their beds may be, I’ve always felt a sense of disappointment when trying to connect to these stories. As the great-granddaughter of Italian immigrants, I was always subconsciously evaluating where I would fit in among the characters, and these kinds of often testosterone-heavy stories didn't leave much room for an exploration of female interiority. I’ve spent years searching for alternative narratives of both Italians and Italian-Americans, and finally, with HBO’s adaptation of My Brilliant Friend, I’ve found a representation of Italian culture that answers the questions that lingered in my mind for much of my life.

My personal rejection of The Godfather isn’t due to any inaccuracies in its portrayal of Italian-American culture. I know firsthand that it's a fairly accurate one: Like many Italian immigrants, my family arrived in New York City before dispersing throughout the boroughs. My great-grandparents landed in Hoboken, New Jersey, where I was born. I visit that town often, and as I walk the streets, I think of the stories that my mom told me about the hyper-patriarchal culture that raised her. Men ruled the household and the streets, just as they do in The Godfather and the Hoboken-based On The Waterfront, and from what I’m told, the men of my Italian family were loud, controlling, and intimidating like the men in those films.

I felt like I'd learned enough about the crooked, hyper-masculine Italians living in the U.S. just from family lore, and I wanted to understand more about the Italian culture that you don't see in a Scorsese movie. It makes sense that a director might want to focus a film on the dynamics of the mafia rather than the women cooking meatballs at home. But from my perspective as a woman wishing to learn more about her heritage, that story was never going to resonate strongly with me.

If a movie about Italian-Americans isn't about the mob, it's most likely a feel-good comedy in the vein of Moonstruck, My Cousin Vinny, and Big Night. But while those are all great movies, they didn’t provide me with what I wanted to know, which was: what does it feel like to be Italian, and more particularly, to be an Italian woman?

Italian cinema has a rich history of auteurs, and while I devoured many critically acclaimed movies that tell stories of Italian culture, like La Strada, Two Women, Love and Anarchy, Cinema Paradiso, The Conformist and Life is Beautiful, I never truly saw myself in them — and not just because I'm not from Italy myself. So many movies made in Italy center around its Fascist period during World War II, and as fascinating as they may be, they tend to illustrate large-scale conflicts that don't necessarily bring you inside a character's psyche. (A notorious counterexample of this of course is Fellini's 8 1/2, but seeing as that movie is all about a man who uses women as muses and disposes of them whenever he sees fit, it wasn't quite the depiction of nuanced female interiority I was looking for.)

It turns out that what I was looking for was My Brilliant Friend. Adapted from the first of Ferrante's acclaimed Neapolitan Novels, the series follows two childhood friends, Elena Greco (first played by Elisa Del Genio and later by Margherita Mazzucco) and Lila Cerullo (first played by Ludovica Nasti and later by Gaia Girace) as they grow up in a rough enclave of 1950s Naples. Much of the first novel and therefore all of the first season is spent watching them navigate a ruthless patriarchal culture similar to what's depicted in so many mafia movies, but the key difference is the perspective.

Watching My Brilliant Friend feels as if you’re watching a spinoff series about what happens in the background of a mafia movie or TV show. Characters like Michele and Marcello Solara are likely more familiar Italian characters to most viewers: They're corrupt, self-interested, and menacing, like Don Corleone from The Godfather. But in My Brilliant Friend, their shady dealings happen in the margins and are only referenced in relation to how they affect Elena and Lila.

Rather than imagining what the women in the background of movies were thinking during the fight scenes, My Brilliant Friend zooms in on Elena’s face so her furrowed brows can express more than any swinging fist could ever convey, though we see those largely in the background, too. The story here isn't just an aggressive fight over male egos, it's about a group of girls' loss of innocence as they watch the boys they grew up with turn into their violent fathers.

The careful pace of the TV adaptation doesn’t rush through any of it. The camera lingers on Elena and Lila's faces as they interact for what might feel like two seconds too long to some viewers, but it really lasts just the right amount of time to capture the feelings surrounding the complicated network of compounded successes and slights of their friendship.

In one scene, while on a rooftop doing laundry, Lila shares her opinions with Elena on the political disruptions permeating their Naples neighborhood. While Elena and Lila as young women are somewhat isolated from the corrupt politics of their neighborhood, their observations about their community are worth watching. I like to imagine that this is what life was like for my family members in Italy — because it likely was. Before moving to the U.S., many of my family members lived in Sicily and Naples, where the mafia and its machismo culture that you so often see in Italian American films originated. And, most likely, the women in Italy talked about those things while doing the laundry. It shouldn't be remarkable to see this on screen, but it's still such a rarity to see a story that forefronts a friendship between two women, allowing the mafia and crime-related turmoil and conflict that colors so much of Italian and Italian-American stories to weave in and out of the background.

It’s no secret that history is written by men. The male perspective (often white male perspective) is considered so universal that it’s oftentimes difficult to imagine what women were doing at any point in the past. I always knew that there was more to the story of Italian culture than what I’d seen, but I didn’t quite know what that would look like. I always knew that my great-great grandmothers who lived in Sicily and Naples weren't just the fringe characters in other peoples' stories. Like Lila and Elena, they had stories of their own.

I can imagine that some people who watch My Brilliant Friend might find it boring or uneventful, but to me, that’s exactly the point. In order to revise history to be more inclusive, in order to share the experiences and perspectives of marginalized peoples, you must get used to refocusing your vision away from a hyper-powerful man who runs the neighborhood like the Solara brothers or Don Corleone, and instead zoom in on the women who often make up the background of the frame. There might not be as much large-scale action, but Elena and Lila’s subtle power struggles and the confusion they share while attempting to make sense of their place in the world is what makes My Brilliant Friend every bit as fascinating and captivating as a story about a man waking up with horse’s head at the foot of his bed.

More like this
Everything To Know About 'And Just Like That...' Season 2
By Jack Irvin and Grace Wehniainen
These Brooke Davis Quotes From 'One Tree Hill' Will Never Get Old
By Sabienna Bowman and Jack Irvin
Ed Speleers From 'You' Also Portrayed A Major 'Outlander' Villain
By Gretchen Smail
These Clues Suggest 'Velma' Season 2 May Be On The Way
By Grace Wehniainen
Get Even More From Bustle — Sign Up For The Newsletter
From hair trends to relationship advice, our daily newsletter has everything you need to sound like a person who’s on TikTok, even if you aren’t.