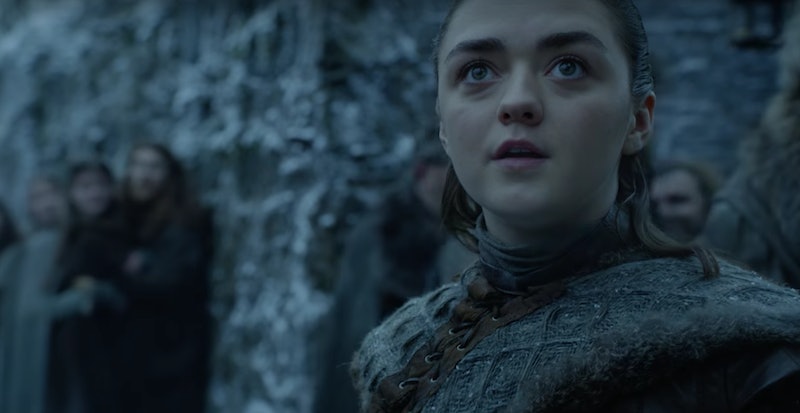 Game of Thrones fans have had to deal with a lot. From the twists and turns of the show combined with all the deaths and betrayals, watching the series can be a total roller coaster. However, the lack of footage and trailer for Season 8 is what's really frustrating fans at the moment. But, thankfully, there's new Game of Thrones footage in HBO's 2019 show and movie reel, so fans can get a little something before the April 14 premiere.

In the new trailer, HBO lines up all of the upcoming original shows and movies they have planned for this coming year, with most of the video showing off never-before-seen footage of the various projects. It opens with a wintry scene with flocks of birds which could be from Game of Thrones, but it's not until the 49 second mark that you'll actually see Drogon flying over marching warriors that the fantasy show's portion officially begins.

And, unfortunately, five seconds later, it's done. But in that span of time you also get to see how Arya Stark reacts to seeing dragons for the first time, and it's exactly how you'd expect her to react: with rapt amazement, possibly bordering on admiration. The remaining Starks at Winterfell know that Jon Snow is coming home and bringing Daenerys Targaryen with him, and they've most likely heard of her dragons. However, hearing about them and actually seeing these fantastical creatures are two completely different things. But what can these few seconds of footage mean? And how do they fit in with where viewers left off? Let's take a look.

So, as mentioned above, Jon and Daenerys are coming back to the North after Jon left to gain support to fight the White Walkers and their army of wights. And while he thinks he has the support of all major players thanks to the council meeting at the end of season 7, Cersei has other ideas — namely to betray them all. Of course, no one knows this, so right now they're gearing up to face those White Walkers, the largest known threat to them at the moment. That's why the army of marching soldiers makes sense for a scene that's set at the beginning of Season 8.

With Daenerys and Jon's new tryst, they're going to be pretty close this season. Well at least at the beginning, while they are still oblivious to their relation to each other. But regardless, as fans saw with the snippet of Sansa meeting the Khaleesi for the first time, she's being welcomed to Winterfell. And where the Mother of Dragons goes, her dragons do follow, so the clip of Arya's face lighting up is definitely the first time she's seeing the beauties. Unfortunately they're down to two, due to Viserion being a wight dragon now, which will no doubt spell problems in the future.

Arya is all about the fight and vengeance, or justice rather. She is not one to sit back during a war that her family's involved in, so it only makes sense that any help they have, she'll be all over it. And her adventurous nature further explains why the dragons are so fascinating to her. She's not touched by fear, but she does look like she can't wait to ride Drogon (or at least meet him, since Daenerys is the only one to ride, so far). But if she was given the chance, you know Arya would take the first trip she could.

So again, unfortunately there's only a collective several seconds of footage for Season 8 and it's premiering in less than two months. It's not ideal — a full-fledged trailer would be great — but the hype is still very much there. With so many loose ends to handle the final season of Game of Thrones is going to be a doozy, so we'll take every tease we can get.