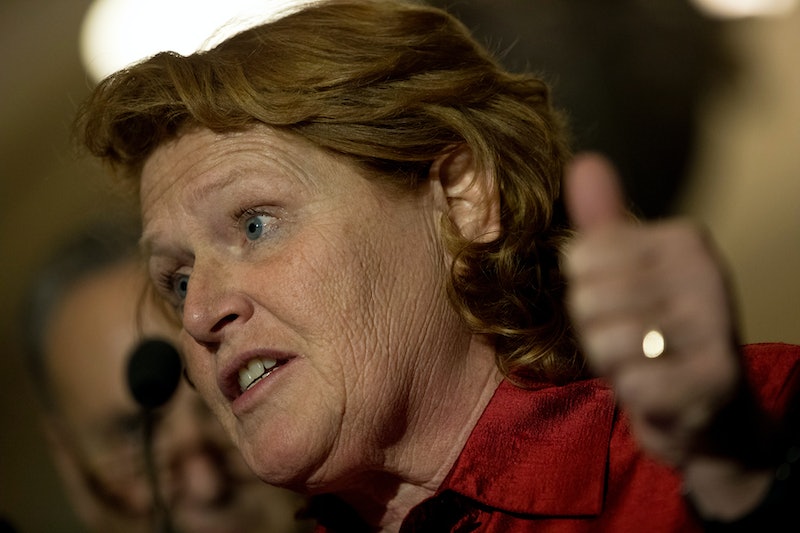 In North Dakota, Democratic Sen. Heidi Heitkamp is facing a tough re-election campaign as Republican Rep. Kevin Cramer inches ahead of her in polls. As Democrats can't afford to lose seats in November's midterm elections if they wish to wrestle control of the Senate away from Republicans, Heitkamp and Cramer's race has drawn national attention. But one moment in particular has recently fallen on people's radar — Heitkamp's emotional defense of the #MeToo movement after her opponent characterized it as a "movement toward victimization."

"I think it's wonderful that his wife has never had an experience, and good for her, and it's wonderful his mom hasn't," Heitkamp said when asked about Cramer's comments in a New York Times interview at a festival in Rutland, North Dakota. "My mom did. And I think it affected my mom her whole life."

Heitkamp told The Times that her mother, Doreen, had been sexually assaulted as a teenager.

"And I want you to put this in there, it did not make my mom less strong that she was a victim," Heitkamp said. "She got stronger and she made us strong. And to suggest that this movement doesn't make women strong and stronger is really unfortunate."

Heitkamp also appeared to question Cramer's expertise in the issue. "The better part of my career in public life has been working with victims," she told The Times. "Did you ask him how many victims during this process he actually sat down with, and survivors he sat down with, and visited with personally?"

In an interview with The Times, Cramer appeared to question survivors' credibility and then suggest the #MeToo movement had gone too far. "That you're just supposed to believe somebody because they said it happened," he said of the movement, which has seen a number of women come forward with accusations of sexual assault, abuse, and harassment. "The world got to see close up how ugly it can be when you go too far," he continued in reference to Kavanaugh's confirmation hearing.

He then appeared to claim the #MeToo movement was more about victimization than empowerment. "They cannot understand this movement toward victimization," Cramer said in a statement The Times reported was a reference to his wife, daughters, mother, and mother-in-law. "They are pioneers of the prairie. These are tough people whose grandparents were tough and great-grandparents were tough."

But in North Dakota, a state that President Donald Trump won in the 2016 elections, Heitkamp's opposition to Kavanaugh hasn't prove to be particularly popular, according to The Washington Post. And Heitkamp's seat may be in jeopardy because of her refusal to support Kavanaugh's nomination to the Supreme Court, according to recent polls that show Cramer gaining a slight lead over the incumbent senator. A Fox News poll released last week ahead of the Kavanaugh vote showed Cramer leading Heitkamp 53 percent to 41 percent. Similarly, a recent poll from FiveThirtyEight has Cramer slightly ahead with voters at 51.9 percent compared to Heitkamp's 48.1 percent.