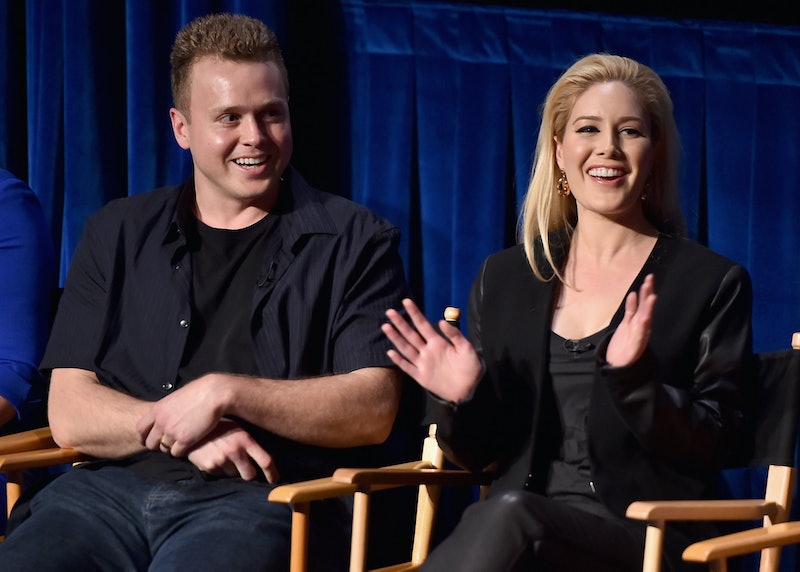 Here is some more exciting news for Speidi. As revealed by Us Weekly, Heidi Montag and Spencer Pratt are having a boy. After getting a call from their doctor's office, Montag couldn't wait to tell her husband. "I ran into the room and said, 'It’s the doctor’s office!' The doctor said, 'It’s a boy!' I started screaming." According to the former star of The Hills, she wanted a boy more than Pratt. "It was in my heart to have a boy," she admitted.

She added about Pratt, "I thought Spencer really used to want a boy, and then a few months ago we had a conversation where he said, 'Let’s just make sure it’s healthy. Boy or girl, I don’t care.'" Based on that alone, it sure sounds like the 33-year-old has matured a great deal since his time on The Hills. I'm sure viewers of the show never would've thought the day would come when he'd be a father, but that maturity level is something that could make him a great one.

Per Montag, Pratt also can't wait to teach his son jujitsu and play soccer with him. "I’m really excited for his personality and his little smile," Montag said about what she's most excited for when it comes to having a boy. "I’m excited to take him to Disneyland and to see if he’s into dinosaurs, Mickey Mouse or ballerinas — it can be anything. Maybe he’ll be the best dancer!"

That statement right there also goes to show you how wonderful of a mother Montag will most likely be. She seems extremely open and accepting of whoever her son will be and whatever his interests end up being. That makes the best parent.

As for names, Montag didn't discuss any with Us. The first name that came to my mind for their boy was Enzo, but I have a feeling it probably isn't an option. For my fellow die-hard Hills fans, remember when Montag and Pratt supposedly lived in that luxurious home in Season 6? They also had so-called neighbors, including a young boy named Enzo. The MTV "reality" series portrayed Montag loving Enzo, whereas Pratt wasn't so much a fan.

Though, it's important to add that Montag told BuzzFeed in March 2016 that Enzo was a child actor. "I don’t talk to Enzo, but honestly he’s like the cutest kid I’ve ever seen in my life and obviously he was a child actor!" she said. "He did a great job."

Still, I highly doubt Enzo is at the top of their name list, mainly due to the fact that the show is part of their past and they're looking to the future as parents. They've moved on from The Hills. Who they were —or who they were portraying on the show — isn't who they are anymore. So why would they want to name their child Enzo? It would be a huge reminder of that time of their lives.

Granted, I could be completely wrong and they may actually love "Enzo Pratt" as a name. If that does happen, I won't lie in saying that I will get so much enjoyment out of that name choice.